Back to the stage!

I did a set Saturday night at Duke’s Last Laugh in Glenmont, NY, just outside of Albany. It was my first time on stage in about four months, and my first time ever on that stage. Here I am with my buddy Dave Kanyan, who hosts the show. 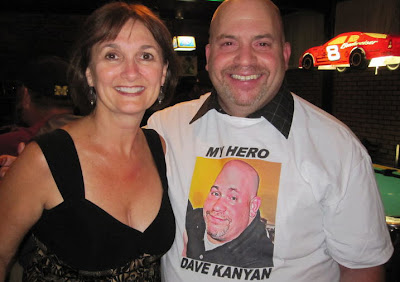 A good host is the key to a successful open mic show, and Dave does a fine job running the stage. Kudos to him—I’ve performed on stages where the host would let drunken or obviously baked comics with no decipherable act drone on and on way past their allotted time. Of course, you can’t control the quality of the comics in an open mic setting, but you can certainly control the quality of how the stage is run. Dave keeps it professional.

I’m happy to report that I did well and after almost seven freakin’ years of doing stand-up (on and off), I’m finally starting to have fun. That’s supposed to be the whole point, right? Like why would you continue to partake in a hobby that doesn’t bring you joy?

Historically I’ve had some issues with stage fright and so the whole notion of having fun while performing stand-up has been lost on me. Fun? What could be fun about putting yourself in front of a bunch of strangers with the sole purpose of making them laugh? What could be fun about possibly forgetting your entire act and having to stand there like a vacuous-brained doofus?

I think I can identify why I’ve had this turning point. In corporate training, we have what’s called a “bag of tricks” that’s comprised of war stories, anecdotes, helpful hints, etc. We pull from this bag of tricks during a training session as applicable to the trainees in front of us. The more training experience you gain, the more you have to pull from. 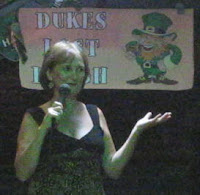 The same applies to comedy. After almost seven years, I finally feel I have enough material in my bag of tricks. If my mind goes blank, I have something in the bag to pull from. Whereas I used to strictly adhere to my set list, I can now assess the audience a bit before I go up and adjust my act accordingly by pulling from my bag of tricks. I can ad lib more and interact with the crowd more, as opposed to just delivering material as if it’s a speech. This makes a world of difference and makes it much more fun.

Believe me, I have no aspirations to do comedy professionally; it’s strictly a hobby. I’m primarily a writer; stand-up is just a piece of the puzzle that is Linda Lou. But it wouldn’t make sense for me to do stand-up if I’m not having fun. Thankfully, the fun part is finally starting to kick in.

My sister Lori videoed my set, but I need to edit it a bit before I put it on YouTube. Coming soon…

When I sell, I always try to make my customer laugh and relax. I do have a Vegas reference. Explaining how a shelf in a refrigerator can take a can of soda spilling over and not getting everywhere, I tell them I call it The Vegas Shelves, hesitate a second, while they wait and say" What spills there stays there", thank you very much, I'm here all weekend!

fantastic! there is very little better than fun. good for you for getting to this place. this post made me happy. thanks.

I am so proud of you! I think you did an excellent job Saturday night. Very profreeional and natural! I like how you used the guy in the audience too! Very funny! You're the best!