Before I forget, my Kindle book is FREE this weekend (Friday, Saturday, and Sunday) so before you do one more thing, hop on over to Amazon and pick it up!

Okay, so if someone had told me 20 years ago that I'd be sitting in the front row of an Andrew Dice Clay show in Las Vegas, I'd have said, "Get the hell out."  Seriously.  I never cared for his type of humor during his heyday in the late 80s/early 90s; I always considered him to be kind of a misogynist. Not that I'd ever ever actually seen more than a sound byte of his act, but there must have been some reason why Saturday Night Live cast member Nora Dunn refused to appear on the same broadcast as him, right? As did Sinead O'Connor.  And in 1989, why would MTV have banned him for life?  Huh?

I've gone years and years without giving "The Dice Man" a second thought. Then last year I considered hiring a comedy coach, Michael "Wheels" Parise, but was hesitant when I heard he was the opening act, tour manager, and best friend of Andrew Dice Clay.  Uhhhhh.... He would probably not be a good coach for me, I reckoned.   But then I saw him speak at last year's World Series of Comedy and had a good feeling about him, so I gave him a try.

Wheels ended up coaching me for several months, and it was the best decision I've made in my so-called comedy career. He's a fabulous teacher who could take me to the next level.  That's what fabulous teachers do.  And as a performer, he's funny as hell. Here's a clip from one of his shows at The Laugh Factory here in Las Vegas.

Anyway, Wheels would mention ADC to me now and then, and then a couple of months ago I had a client whom I really liked and who seemed really funny and he was into him, and then Mike and I saw Blue Jasmine, the latest Woody Allen movie.  ADC has a relatively small role in it, but man, he did an AMAZING job.

I got more curious about ADC, and found out he's Jewish (!) (you know I'm a big fan of the Jews) and we're almost exactly the same age, so I was like, you know, let's check him out.  Wheels, God bless him, hooked us up and that's how we ended up front and center, spitting distance from Andrew Dice Clay at the Vinyl showroom at the Hard Rock.

It was a fun show.  Wheels opened and he was hilarious.  Then there was a funny chick, Eleanor Kerrigan, who was quick-witted as hell. A perfect selection for the lineup. And ADC--I didn't really know what to expect and was pleasantly surprised.  He was amusing; dare I say, there was something endearing about him?  Like he might be one of those guys whose stage personal is so unlike how they are in real life. Just a guess.

You can see some great photos of the three of them on this site.

So getting back to Blue Jasmine.  Gotta say I did not love the movie, even though my man Louis CK had a bit part.  The acting is amazing, though; it's truly an actor's film, but OMG it is depressing as hell.  But again, Andrew Dice Clay was a real highlight.

Have you ever noticed how well comedians do in dramatic roles? I'm not thinking "Mr. Laughter-Through-Tears" Robin Williams, but Louis CK and Jim Carrey and Steve Martin (LOVED Shopgirl).

So there you go.  Your pal Linda Lou keeps an open mind and wins again.  Just don't get used to it.

As you know, I hate compromising.  Compromising sucks all around; whenever I'm in a position where I have to compromise, I can guarantee you I'm secretly stewing (maybe not so secretly) because I'm not getting 100% of my way. 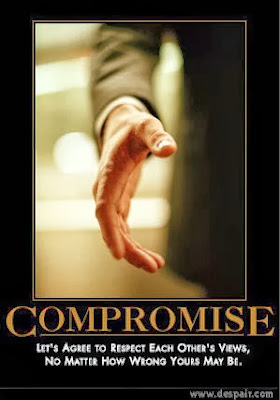 I'm well aware that the window of opportunity of what I like is open but a crack; I'm a picky old bat.  And the beautiful thing is, I'm good with it!

Anyway, several months ago, the Sapphire Gentlemen's Club started doing regular comedy shows.  Every once in a while, one of the show's producers would call me to do a set there and I was like...  no. Strip clubs are not my scene, which is ironic because I swear to God I think I'd make an incredible stripper if only I could lose about 20 pounds.  Yes, I am totally in touch with my inner stripper.

Anyway, a few weeks ago I got another call and the producer assured me the showroom is beautiful with state-of-the-art blah-blah and it's really a classy place... and I'd be able to do my dirty material, which I kind of enjoy doing more than my clean stuff.  Plus I really like the guy, so I said yes to a Friday and Saturday night gig.

OMG, I had so much fun! The showroom really is beautiful, and it's right near the front entrance, so I didn't have to walk through the club to get to it. The first thing I had to do Friday night was fill out a W-9 tax form, which cracked me up.  It took me 56 years, and finally I'm filling out tax forms at a strip club!

The show was a mixture of comedy, magic, and burlesque.  I can only imagine how psyched the audience was to see me come out after this hottie. 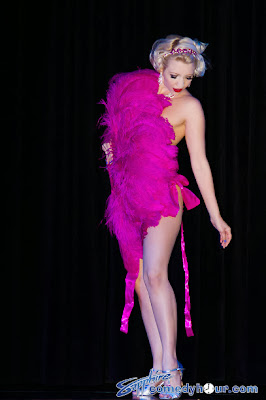 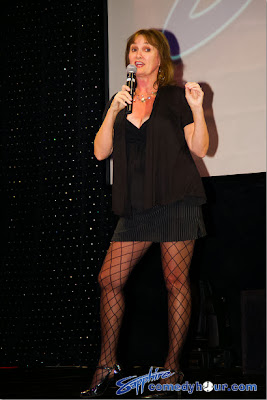 This is funny. After my set, I'm sitting in the audience watching the magician I'd been talking to in the green room, and then... look what he pulls out in the middle of his act: 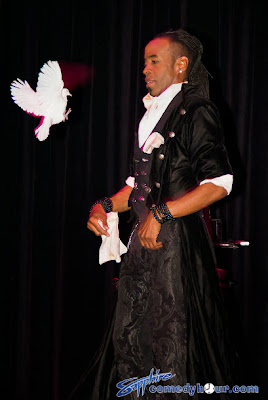 I nearly shit.  First I was going bonkers because birds indoors freak me out, and then I was like, WHERE THE HELL WAS THAT GODDAMN THING WHEN I WAS BACKSTAGE WITH YOU???  And then the guy pulled out a couple more birds and a cat and I just about needed smelling salts.

Needless to say, my mission Saturday night was to find out exactly where the birds were and the only time I spent backstage was right before my set, when I was talking to a really nice stripper who had started to read my book and she really liked it so I had to give her a hug. 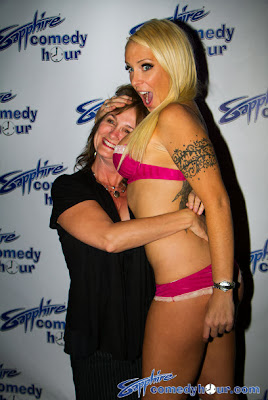 Here's a group shot of me and my new friends: 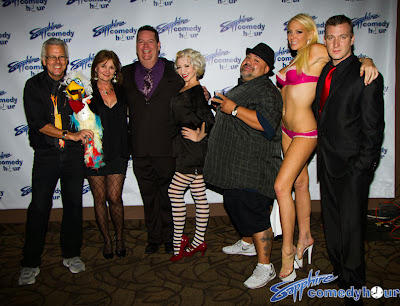 So as you can see, this is the one time where keeping an open mind actually paid off.  But don't think I'm going to make a habit of it; I'm not about to start eating celery or tofu, and you won't see me at that Gravity movie everyone's raving about.

But you might see me perform at a strip club again.  Fingers crossed!
8 comments: