No doubt you've heard of Albany, NY, and you probably even know it's the state capital. I sometimes wonder what those of you in other areas of the country (and the world) imagine Albany to look like.

Well, imagine no more! Last Saturday Connor and I took a bunch of pictures to show you. We spent the day at the Empire State Plaza in downtown Albany. The Plaza, finished in the mid-1970s, is 98 acres of state office buildings. My friend Tim, whom I'm staying with this summer, works there. 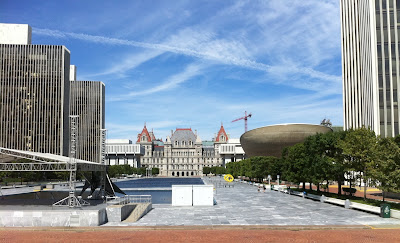 You can kind of see a stage on the left side of the photo. They have concerts and music festivals here (a lot more before the budget cuts). At the end of the Plaza is the Capitol building. 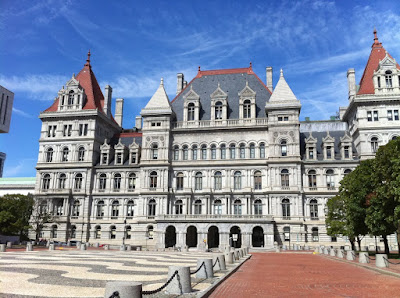 The round thing on the right side of that first photo is called The Egg. There are two theaters in there; it's a great place to see a show. 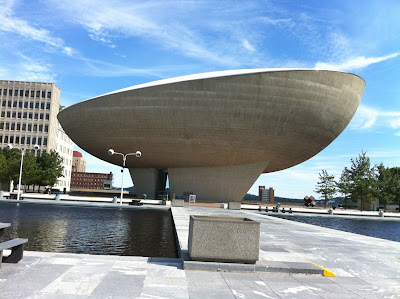 Here's my boy relaxing on one of the pieces of art. There's art all over the Plaza; the concourse under the area you're looking at is filled with it. Governor Nelson B. Rockefeller, who built this complex, was a big art collector. 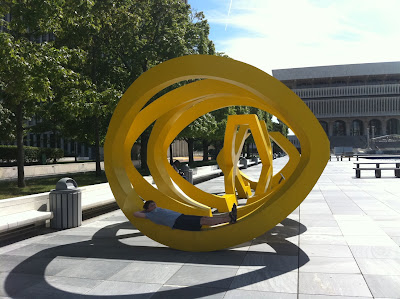 It's funny--I have pictures in my storage unit of Christopher and Courtney playing on that yellow thing when they were little. Chris and I used to bring the kids there and they'd run around like hell. In fact, Chris and I walked around the Plaza on one of our first dates. And now here I am with my grandson. 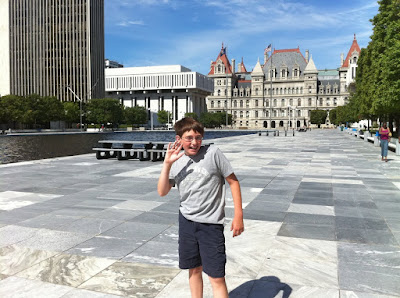 Connor's such a ham. (I wonder where he gets that from?) 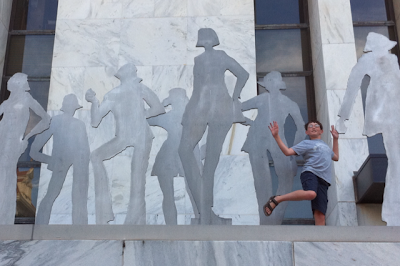 I had a great day with Connor; I cherish every minute I spend with him. He'll be a teenager before I know it--I'm so glad I came back this summer to hang with him.

Just north of the Capitol is the Alfred E. Smith (I almost wrote "Newman") State Office Building. This was the tallest building in Albany until the Corning Tower in the Plaza was built. Beautiful Aunt Joyce used to take me and Lori to the observation deck when we were little. 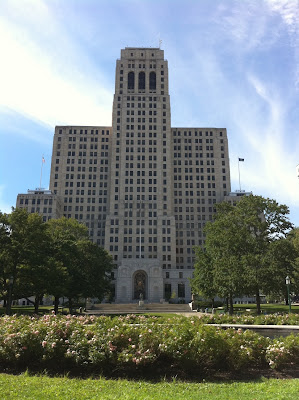 This is the State Education Building. 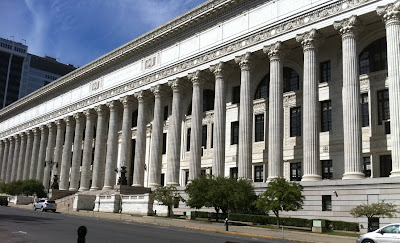 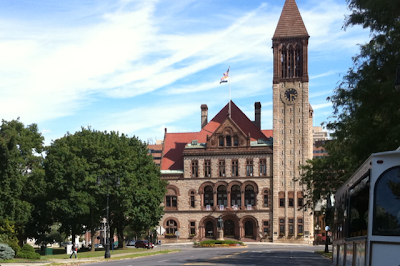 Did you know Albany has such beautiful architecture? There are so many gorgeous buildings downtown; it's an old city.

Here's a bird's-eye view (I didn't take this one). The blue at the top is the Hudson River.

Here's a view of downtown Albany from the highway.

So now you know what Albany looks like! Is it what you imagined?

Nice Pics I want to go there. Sept 7th Jackson Browne will be there. Let's go, XOX, Kath

i spent the last 2 years of high school in the Albany area - Clifton Park to be specific - during 1984 through 1986. the pictures bring back good memories of my few but memorable visits to the Plaza and surrounding areas.