Wow—this is my 400th post. I’ve always known I’m full of crap, but even I’m surprised at that figure.

Speaking of figures, O.M.G. this partying all summer is taking its toll. I think I got my yoga mat out once since I left Vegas on May 17. Disgusting. The only reason I’m not freaked about seeing Mike this weekend in this horrific body state is that when I told him that I (quite unexpectedly) was coming to be back in town he wondered aloud how he was going to lose 25 pounds before I get there. Whew.

And remember how I had to bring my bathroom scales with me on my cross-country trip so I wouldn’t let my weight get out of control? I think I’ve stepped on them once. That’s fewer than the number of truckers who my sister Lori got to step on them at the highway weigh station on I-40. 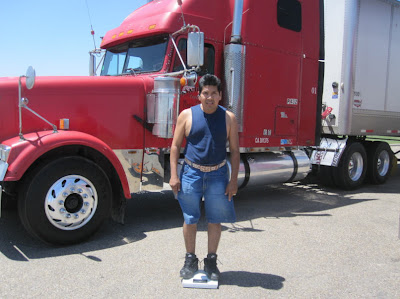 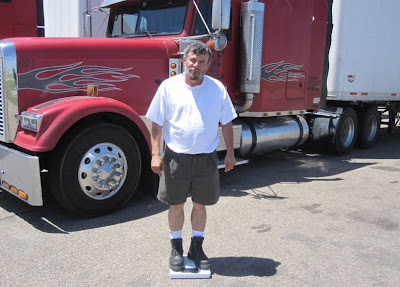 We’re still laughing about that trip.

So yesterday my new Scion—which I still totally love—hit the 10,000 mark. Yikes—I just got in on April 2—that’s a lot of miles. (Yes, I know that’s not the only thing with a lot of miles…) Of course, Lori drove about a third of them; you may recall that she didn’t allow me to drive one friggin’ minute during our trip.

Just as well. I’m the first to admit that Lori’s a much better driver than I am. Take a look at this video we made around midnight in the back hills of Tennessee. She’s driving, snapping her fingers, singing, and filming a music video. (Stay with it through the first minute and a half.) I can barely drive and change the station on the radio at the same time.

Not exactly a driver’s ed training film, huh? I swear, we weren’t drinking. That’s just how we are. Just your average 50-somethings. Yup.

I've never heard that version of "Runaway" before...

Do you take requests? If so, does she know the classic "Linda Lou" by Ray Sharpe?

I just showed people at work the video and I can't stop laughing! I love it! What a long strange trip it was!!!