Did you think I dropped off the face of the planet?  You know me, I've been traveling.  I just got back into Vegas tonight after almost a week in Albany, with a little side trip to Maine last weekend.

Leading up to the trip I was going positively bonkers trying to tie everything up at work--or at least leave things in decent order--so my boss wouldn't have to walk into a mess when he came to town to cover me. I was stressed as hell, but I got things to the point where I could leave in good conscience. I got into Albany at about 1a.m. Wednesday morning after one of my best flights ever--the plane was pretty empty and I had the whole row to myself. I love it when that happens.

Everybody in Albany is doing well. Believe it or not, my son Christopher and daughter-in-law Ketti just celebrated their 1-year anniversary.  Man, time flies. And you know I could just eat this little one up. This was the only halfway decent photo I could get of her. 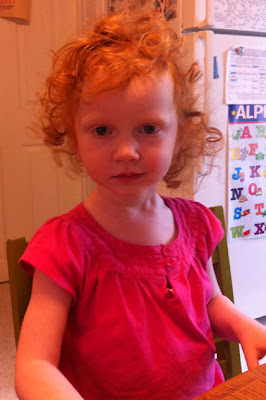 I was glad I was able to spend a good amount of time with my friend Carmela. Her husband, Chuck, died in January; he was one of my dearest pals since we were kids. Every time I go back to Albany, I'd make sure I stopped in to see Chuck and Carmela, and I'd try to free myself for Sunday nights so we could watch the Fox cartoons together. It was weird being at their house with no Chuck. We're all going to be heartbroken for a long, long time. I don't think we'll ever get over that loss, but thank God we have each other and our memories of Chuckie. He was a wonderful man and a great friend.

On Saturday morning Lori, her son, Cameron, and my grandson, Connor, and I headed off to Maine to surprise our Quirky Lesbian Aunt Joyce for her  75th birthday weekend. (Remember, I had two aunts named Joyce; Beautiful Aunt Joyce died of breast cancer in 2009.)  We surprised the shit out of her! (Not literally. I don't think.) Joycie is awesome.  Aunts are awesome! 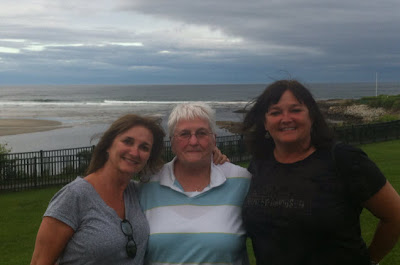 "Aunts are like mothers, but without all the yelling."  Sounds like something that should be embroidered on a pillow.

We stayed at The Anchorage Resort in Ogunquit, which I can't actually recommend. It was way overpriced ($191 for one night, including tax) for a room the size of a postage stamp. Yes, it was on the water, but there was no beach access. Yes, they had three lovely outdoor hot tubs, but they closed them at 10:00 on the dot. On. the. dot. Yes, we could see the ocean from our room, but it was quite a ways away; our immediate view was of a parking lot.  Our room was super clean, but still I give the place a thumbs down.

Lori wanted to get up to see the sunrise, so she set the alarm for 4:45 a.m., which was sad because I remember when we'd be rolling in at that hour. "You know it's been a fun night when you get home and the newspaper's already at your door," we used to say. Sigh... What's happened to us?

It really was a beautiful sunrise, though. 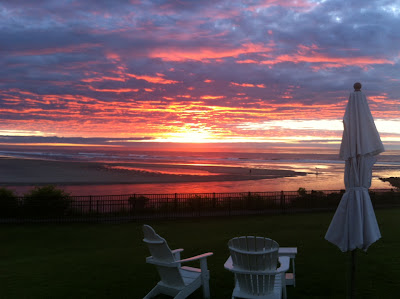 The next day we headed down to see our cousin Kelly who lives on Plum Island in northern Massachusetts, right outside of Newburyport. 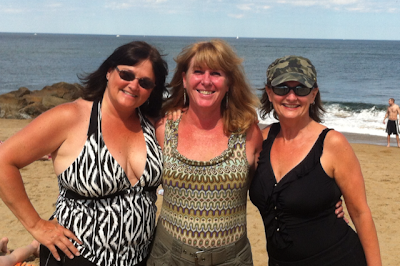 Now, THAT place is incredible! The island is almost exclusively residential, and the beach is fantastic--not at all commercial. As you can see, we had beautiful weather. 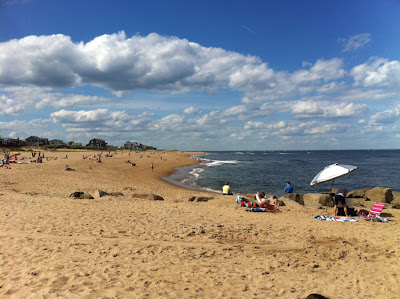 Can you believe how HUGE Connor is these days?  Whatever happened to my little grandson?  He's 6 feet tall now and won't be 15 until the day after Christmas.  At this pace, he'll catch up to Christopher, who's 6'4", in no time.  Yikes! 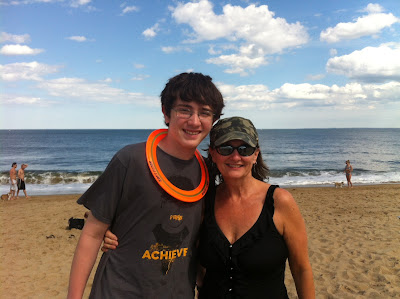 Here's Connor with my nephew Cameron, who's 19.  Those are a couple of good looking boys, no? 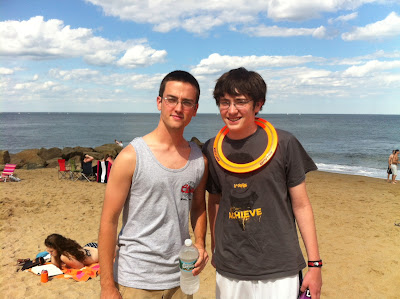 And they're good boys, too.  When we took Joycie out for her birthday dinner, the boys went to buy something in the gift shop and the lady who worked there made a special point to come out and tell us that they're "fine young men."  They really are.

After some time on the beach, we were treated to dinner in Newburyport--thank you, Kelly! OMG, the food in New England... every meal is better than the last one. Incredible. I'd weigh a thousand pounds if I lived there. And then I'd have to dig up my stupid granny bathing suit with the skirt again.  But until then, it's the black one-piece. 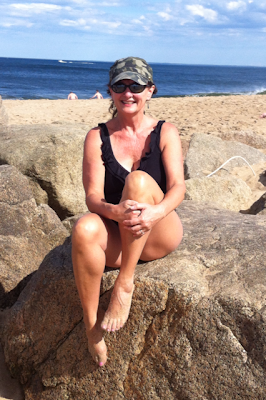 (My thighs are not that big in real life.)

So it was a great trip back East, but I could have used a couple more days. Tomorrow it's back to work for me. Good thing I love my job or I'd be bumming. I still have a lot more to tell you, so stay tuned. Now that things should be settling down, I should be able to get back on my regular posting schedule. Fingers crossed!

I'm so glad you had such a good trip! Yeah, the most stressful thing about vacations is all the work you have to do in order for your work world not to fall apart in your absence. Not that I worry about that anymore.

Those young men are adorable. How grand that their behavior is laudable -- you don't find that much. And of course that little munchkin is as cute as ever.

I think that I'm going to steal your newspaper quote and put it somewhere, and FANCY blog page by the way... :)

It was a short visit, but still a great one! I am psyched we got to go to see Joyce and Kelly and walk the Atlantic! Can't wait to hit the Pacific later this month! You are the bestest!!!

Linda your appreciation for the big and little things in life is so heartwarming. Keep sending out your positive message -- I can feel the goodness :)