Loud talkers at the movies -- I don't care WHO you are!

I'm practically famous for my intolerance of bad manners in movie theaters (see Pet peeve #437: LOUD talkers at the movies). Well, it seems I'm not the only one, and the practice of people acting in public like they're being entertained from their sofa is not limited to movie houses.  The New York Observer recently reported that "Broadway audiences are behaving badly, and someone is going to get hurt." 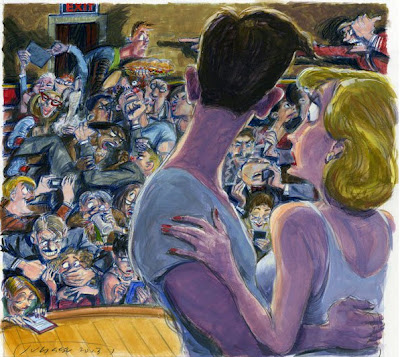 According to this article,


The fight broke out during the first act of Glengarry Glen Ross.

As Al Pacino and Bobby Cannavale circled each other on the boards, a well-dressed woman in the audience was noisily working her way through a cellophane package of Twizzlers. When a man in the next seat shushed her, the woman’s thuggish husband loudly intervened.

The exchange became more heated until the husband—who could have passed for a second-tier personal injury attorney from Planet of the Apes—challenged his adversary to “take it outside.” The pace may have been a little slow on stage, but those of us in the mezzanine were riveted by the imminent possibility of actual violence.

Take it outside over a noisy package of Twizzlers?  Hmmm... fair enough. I go bonkers if my film experience is interrupted during a $7.50 matinee; imagine if I paid $150 for a theater ticket?

Evidently these confrontations are on the rise. (And I have to ask, who in their right mind would want to piss off a New York audience?) The article goes on to say that theater goers' "sense of entitlement, and the pushback it provokes from touchy fellow audience members, has resulted in an increasing number of aggressive confrontations, which have now joined more commonplace theater annoyances like texting or a ringing cell phone."

Grrrr....  Reminds me a scene from Bobcat Goldthwait's God Bless America, where the protagonist goes ballistic on the rude audience members. If you haven't yet seen it, I don't know what you're waiting for.

A few weeks ago I was at an AARP conference (if I had a dime for every time I started a sentence with that...) and saw a pre-release screening of The Internship, the new comedy with Vince Vaughn and Owen Wilson. I thought it was really cute.

Anyway, I got there early (as I always do) to get a seat as close to the screen as I can stand, so as to minimize the likelihood of being infuriated by the light of some idiot's cell phone screen. So before the show starts, I'm sitting there thinking how great it is to be among all these mature, vibrant folks with such a zest for enjoying life and I decide to do a Facebook post.  As I'm finishing it up, the lights go down, and in a nanosecond the woman next to me snaps, "Cell phones off!"

Channeling Robert DeNiro:  Are you tawkin' to ME?

Oh. my. God. Forget the, "Aren't old people wonderful?" crap. I sat there positively seething, thinking, "You cranky old bitch. I am so gonna trip you on the way out."

Later that afternoon I had the best film experience of my life at the screening of Jerry Lewis' new movie Max Rose, which at that point had been shown only at Cannes a couple of weeks before. It's not a comedy, though there are some funny moments. Jerry Lewis plays a one-hit wonder jazz musician who makes an unsettling discovery following the death of his beloved wife.  It's a serious role, and he's fabulous in it.  And this is coming from someone who, although I certainly respected him, was never really a big fan.
Right before showtime, they announced that Jerry Lewis would be watching the film along with us. Wow! The 87-year-old icon walked out from the left side of the screen and down the aisle and sat literally four rows directly behind me.

The film is fantastic. I'm always struck by how well comedians do in serious roles and it was almost surreal to watch Jerry Lewis' giant face on screen knowing the guy in real life is sitting right behind me.  Jerry Freakin' Lewis!  A comedy legend!  Then I was like, "I don't care who he is. He'd better not make a peep."

After the screening, he and writer/director Daniel Noah sat up front and treated the audience to a Q&A.  Most people gushed over him, saying how they've been a big fan since 1952... blah, blah... whatever happened between you and Dean Martin... blah, blah... and he was not only very gracious in handling their inanity, but hysterically funny and sharp. So cool. 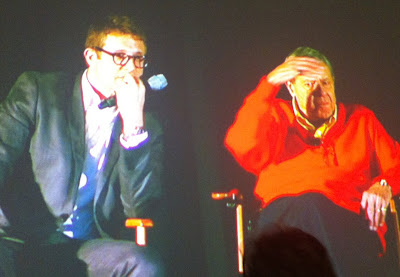 Max Rose is expected to be released in the fall, so be on the lookout.  It's a beautiful movie.

About a half hour after the theater cleared out I ran into Daniel Noah and did my own share of gushing.  A lady nearby heard me and rushed over to say, "This is my son!" which I thought was totally adorable.  I know exactly how she feels--I could burst when my kids perform. Daniel was just so nice; it was a real thrill to meet him.  His sweet mother took this picture of us. 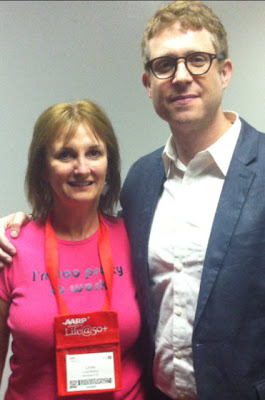 Oy. That is not a flattering one of me.  My boobs are so not that saggy in real life.  But I was at an AARP conference...

So tomorrow I'm traveling again.  Two weekends ago I was frolicking on the Atlantic in Maine; tomorrow my sister Lori and I will be partying on the Pacific in Venice Beach.  We're meeting our long-lost cousin Laurie from New Zealand, who we haven't seen in 40 years, and her daughter, Melissa.  Oh, this will be an adventure...

Very interesting! I don't even know who's side to take in the movie shushing debate! I can't stand people talking in movies and I can't stand bossy people bossing other people around.

It's not usually an issue for me because Mr. C will only go to movies on weekdays during a matinee and sit in the very back row of the theater -- hah!

Still, I'm very intrigued on a philosophical level and I may have to look into this phenomenon further ;-)

I know! What's up with bossing people around? I have no problem doing it, yet when that lady snapped, "Cell phones off!" like a friggin' schoolmarm, I could have bit her head off!

Do some research and let me know--it will be cheaper than going to a therapist.

I give folks a little time, however, before I snap at them. Something about movie theater rage and road rage...idiots are everywhere. I hadn't heard about the shenanigans at Broadway plays! Shit! A new reality series is born!

Have a great time in Venice Beach. It's been 20 years since I've been there and I love it -- a quintessential L.A. experience.

I got into it one time when a woman shushed me during the previews. My companion asked a question (the preview was for "Eight Men Out") and I whispered "they got banned for taking money to lose." Woman in front of us turned around and berated me for ruining her movie experience, so I says to her, I says, "I made one brief comment during a preview. Turn around and shut up." (she wasn't expecting that)

Glad to see that someone else brought up the semi-double standard - he he.

Just think of all the creative things you could have said ...

"Honey, this is a mobile pacemaker. It looks like you need it, maybe?"

"Please forgive me for ruining your advertisement experience."

Talkers in theaters drive me crazy. I'm usually giving someone the "evil eye" and it usually never works.

I was at a Bat Mitzvah full of 13 year old girls that Never. Stopped. Talking. I was shocked at how rude they were but happy when the Rabbi finally spoke up... cuz my stink eye sure wasn't helping. (Gawd that makes me sound old.)

Your boobs look huge? Are they really that big Linda?