Fun things to do in Vegas, Sedona, and Jerome when your girlfriends from college come to visit

Wow. What a weekend. I love playing hostess!

Thursday - the girls arrive. Two of my girlfriends from college, Kathy and Maggie, flew in from Albany last Thursday afternoon and the fun began shortly afterward when I met them after work at Ellis Island. If you're not familiar with Ellis Island, you can read all about this little gem in my recent Living-Las-Vegas column. Trust me, with $1.50 brew-pub 20-ounce beers, you can't go wrong.

Afterward we hit the Ovation Lounge at Green Valley Ranch to catch a blues band. There's a great blues scene here in Las Vegas; again I'll direct you to another of my Living-Las-Vegas columns. Fortunately, we had an early night since the girls were still on Eastern time and I had to get up at my usual ungodly hour of freakin' 5:26 a.m.

Friday - Halloween. The girls checked out the Strip while I went to work dressed as a Mardi Gras goer. (Yeah, what a stretch.) That night we went to the Royal Resort, where I hosted the Las Vegas Comedy Show. I'd never hosted before--I've always done a set--but hosting was fun. There's a little less pressure to be funny, but you can still be as funny as you want.

Afterward we hit another one of my all-time favorite Vegas bars, the Fireside Lounge at the Peppermill. If you haven't been there yet, I don't know what you're waiting for. It's a great place to cozy up with a date, and I found it just as cozy with my girlfriends. After a couple of drinks, we went to Sunset Station's Madrid Room to catch the last few songs of best and tightest classic rock band I've ever heard, Yellow Brick Road. At 2 a.m. we called it a night since we wanted to get on the road to Sedona fairly early Saturday morning.

Saturday - Sedona. We got to Sedona early in the afternoon and had lunch at a Mexican restaurant in the uptown shopping district. This was Kathy and Maggie's first time in Sedona, so of course, they were in awe. We did a little shopping and then checked into our hotel, Sky Ranch Lodge, before it got dark so the girls could see the view from our balcony.

I've stayed at Sky Ranch Lodge up on the airport mesa (which is also an energy vortex) many times, and even got married there in 2000 (perhaps on the same balcony). The decor is nothing special--it wouldn't hurt them to invest in some higher quality sheets and towels--but the view is spectacular. If you go, be sure to splurge for a rim room.

At night we happened upon a really cool little out-of-the-way place, the Oak Creek Brewery. We drank yummy beer and made new friends while sitting around a huge fire pit out back and listening to a funky Grateful Dead-influenced band. I danced with a cool old guy named Robert to a Roy Buchannan song, "The Messiah Will Come Again," which was a real treat since you don't hear bands play Roy Buchannan very often.

Sunday - Bell Rock and Jerome. Bell Rock has probably the most beautiful vista I've ever seen. We climbed a good way up, took some pictures, thanked God over and over for our eyesight, and then went to the Chapel of the Holy Cross. Unfortunately, there is a god-awful monstrousity of a gaudy freakin' mansion at the foot of this sacred structure. Evidently money doesn't buy taste. 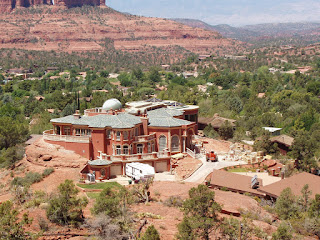 I was driving the girls nuts, I think, because I kept saying, "We have to be in Jerome by 2 p.m." Jerome is a cool little ghost town/artists' colony, and the Spirit Room, the biker saloon in the Connor Hotel, is probably my very favorite place on earth to hang out. They have fantastic bands every Saturday and Sunday afternoon, and every band I've seen has been better than the last.

The girls and I made lots of new friends--a real nice guy named Bill took Maggie for her first motorcycle ride (helmetless, much less!) and I met a really neat biker couple who I think I talked to last August when I was there. The husband, Norm, was a super-smiley guy who looked a little like Nick Nolte had he aged better and when we found out we have the same birthday, we were hugging and high-fiving like it was all meant to be.

On Sunday, the band was Los Guys out of Tempe, and let me tell you, any band that's willing to accommodate my request for Warren Zevon has a special place in my heart. And when they played Van Morrison's "Into the Mystic" as I sat drinking beer with my dear girlfriends of more than 30 years, well, I was truly in happiness overload. Just friggin' out of my mind. 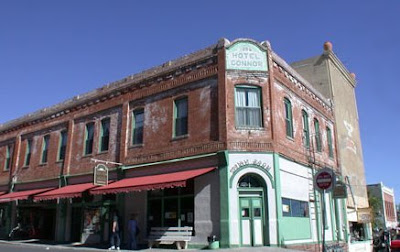 I'd tell you more, but you know what they say: "What happens in Jerome, stays in Jerome." (Ha!) My point is, when you go to Sedona, be sure to spend the afternoon at the Spirit Room at the Connor Hotel in Jerome. It's the most fun, every time!

Monday - back to Vegas. We were going to make a detour to the Grand Canyon on the way home, but we were all a little beat and instead we shopped some more in Sedona. The girls didn't mind--they had never been to the Grand Canyon, but they (correctly) said they couldn't imagine it being more beautiful than Sedona. Personally, I think the Grand Canyon is good to see, but after Sedona it's a little anticlimatic. 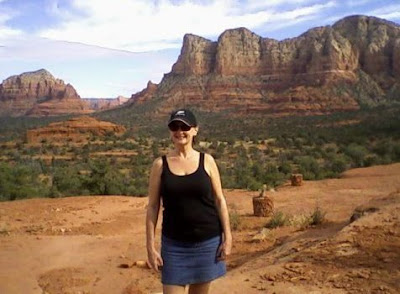 Tuesday - time to say goodbye. I had to work today, but I met the girls for lunch before their flight. They treated me to the Wynn buffet, which is worth every calorie.

Kathy, Maggie, and I had an amazing weekend. We must have said, "How lucky we are" a million times during their visit, and it's true. How lucky we are.

What a weekend! I love Jerome. There is a bed and breakfast there that holds alot of "don't tell" memories for me...lol. I'd go back in a heartbeat. Next time, I'll actually let Todd talk me into a new tattoo at the tattoo parlor at the top of the hill.

Glad you had a good time!
Lisa