Winter may be the best time for writers

Novelist, poet, and short-story writer John Updike has a piece in the November/December edition of The AARP Magazine (no comment) entitled “The Writer in Winter.” He reflects on about what it’s like to be as a writer at an age that is older than many of his idols lived to be.

Early in the piece he states, that “memories, impressions, and emotions from your first 20 years on earth are the writers’ main material; little that comes afterward is so rich and resonant.”

Really? I don’t buy that.

Updike also says, “By the age of 40, you have probably mined the purest veins of this precious lode; after that, continued creativity is a matter of sifting the leavings.” I don’t buy that, either.

Soon after I turned 50 I wrote a blog on my MySpace site and listed all the things I accomplished or lived through during my years between 40 and 50. This is what I came up with:

I witnessed the birth of my grandson.
I buried my father.
I threw up for the first time in 15 years.
I got divorced.
I fell in love again.
I got married on a hotel balcony in Sedona.
I lost a pregnancy.
I moved from New York to Wyoming.
I taught yoga to senior citizens and young people with Down Syndrome.
I watched the odometer of my car mark 100,000 miles.
I giggled and flashed my breasts at the camera as I stood beneath Mount Rushmore.
I frolicked on a New Zealand beach on Christmas Eve.
I moved from Wyoming to Utah.
I got divorced. (Again.)
I moved to Sin City, alone.
I was a hospice volunteer.
I performed stand-up comedy for the first time.
I did a split on a bar in New Orleans.
I flashed my breasts from my hotel balcony on Bourbon Street.
I told hotel security I would never do such a thing and that I'm a grandmother.
I took a job selling timeshares on the Las Vegas Strip.
I got fired for not selling timeshares on the Las Vegas Strip.
I got another job.
I watched the odometer of my car mark 150,000 miles.
I got pulled over four times and never got a ticket.
I rode on the back of a motorcycle through the desert.
I walked off a job because somebody pissed me off.
I got another job.
I witnessed my mother's marriage at the age of 71.
I lost two good friends, and held the hand of one of them an hour before she died.
I wrote a book.

Sifting the leavings? I think not! The first 20 years of my youth were nothing compared to the 10 years that are supposed to usher in middle age. And I have a lot planned for the next 10 years. A lot! 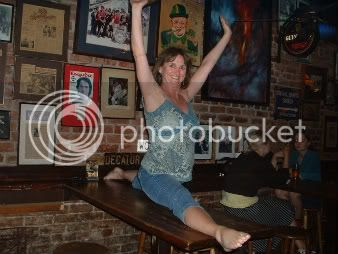 Sometimes I think I'm starting to get a little too old to act like a college student. I have these wonderings that maybe it's time to relax, settle down a little bit, even stop coloring my hair. Then I see something like this post and it reminds me that what I am wondering is TOTAL BS. I'm taking a page from your book and letting no one define how old I am. I know you know this but I'm saying it anyway, you're awesome Linda Lou!

Keep on breathing and enjoy whatever hits you on your journey through life.

Thanks, Todd! And whatever you do, don't stop coloring your hair!

And Bob, let's hope that whatever hits me doesn't hit too hard.

Linda, my friend, I totally agree with you. As much as I enjoyed the first 2 decades of my life, I didn't start LIVING life until I turned 30. I hope I don't lose momentum, so that I can accomplish just as much you have when I reach my 40's! You are an inspiration!

Awesome. You're so funny!