(adapted from my manuscript, Bastard Husband: A Love Story)

I met Paul about eight months after I arrived in Vegas. I’d just done a comedy set on a new stage and stopped in to see a band in the Orleans casino on Tropicana. A tattooed biker type with a goatee and shaved head kept glancing my way from the other side of the L-shaped bar, and from where I sat, I’d be damned if he didn’t look like a cross between Billy Bob Thornton and Charlie Manson. Sure enough, with drink in one hand and cigarette in the other, Slingblade headed over and took the barstool next to mine.

I felt his eyes beaming into me, and could tell he was itching to converse. Shit. I really just wanted to sit there and chill by myself. Thankfully, the music started up. I sent a flirty smile to the bass player, pretending he’s my boyfriend. Yes, I’m with the band.

“Have you seen theses guys before?” Slingblade asked. His gravelly voice matched his appearance.

I nodded in his direction, avoiding eye contact, but I bet if I looked at him straight-on, there’d be a swastika etched in his forehead. I sipped my beer.

Although he maintained a respectable physical distance, on a cosmic level his energy was all over me, totally invading my space. “Baby, why won’t you dance with me?” he asked. I glanced down toward the floor as he spoke. Nice shoes.

Finally I turned to face him. “Because you look like a murderer,” I answered politely. But as the words left my mouth, I realized that wasn’t not quite the case. He was more handsome, his eyes much kinder than I expected. There was an intensity about him, to be sure, but I also detected a vulnerability. I softened a bit myself and teasingly asked, “Well, have you ever killed someone?”

“Yes,” he replied, as simply as if my question were, “Is today Wednesday?” I didn’t quite know what to make of his response. He held his cocktail with his pinkie in the air, not exactly the killer’s way of drinking.

He nudged my arm as the band started to play the next song. “C’mon,” he said. “Let’s dance.”

We seemed to move well together. He smelled nice and his shirt was soft. We danced nearly every song and lingered for a while afterward as the band packed their instruments.

“I’d like to take you out,” he said before we parted. I gave him my number.

Paul picked me up the next Saturday night promptly at eight o’clock. “Here, baby. I brought you something,” he said, handing me a pamphlet entitled Understanding PTSD.

It’s no doubt some kind of warning signal when your date arrives at your door not with flowers in hand, but a brochure detailing his chronic mental disorder. In retrospect, I suppose the gesture was rather considerate, and to be fair, I could have reciprocated with a handout of my own, entitled What You Should Know About Incessant Nagging.

“I have PSTD,” Paul explained. “From Vietnam. I wanted to be honest with you.”

“Post-traumatic stress disorder? Hmmm… I should tell you something, too,” I said, and then with a teasing smile, added, “Men don’t usually get that until after they’ve been with me.”

I’d never been around anyone whose life has been haunted by war. During the Vietnam era, I was young and absorbed in issues of importance like impressing boyfriends and scoring a fake ID. Sure, I saw snippets of the carnage during the six o’clock news—we weren’t bombarded round the clock by cable broadcasts back then—but that was the extent of my exposure. I had no relatives called to war, no friends who lost older brothers serving their country.

For me, Vietnam produced an era of great music, and I remember wishing I were a few years older, to be part of the Woodstock generation and participate in the sit-ins and love-ins and anti-war protests. The closest I came was in 1980, when I left the babies with Chris and took a bus with some girlfriends to Washington, D.C., to attend a No Nukes rally. As someone who’s never been able to grasp the concepts of atoms and molecules, nuclear anything was way beyond my level of comprehension, but Jackson Browne was associated with the cause and he was cute as hell. Though we tried to catch the wave of spirited dissent, the scene was nothing but a party and now I have to live the rest of my life knowing I protested against kind old Jimmy Carter, probably the most peace-minded president we’ve ever had.

For the most part, Paul seemed perfectly normal, though some of the PTSD behavior took some getting used to. I found out the hard way not to trigger his startle response, and would cough or clear my throat when approaching him from behind. Reports of the day’s casualties in Iraq often prompted him to hole himself up with the blinds closed, sometimes for days. “I get in a bad way,” he explained, “so if you don’t hear from me, don’t worry, it has nothing to do with you. I’ll call you when I come out the other side.”

Paul was a blast to hang out with and I reaped the benefits of his many connections in town. We dined in four-star restaurants and got the best tables at the comedy clubs he took me to—everyone he knew seemed willing to comp us in exchange for a few bucks passed in a handshake. Paul’s son, who managed one of the ultra lounges on the Strip, made sure we were well taken care of; bouncers would unhook the velvet ropes just for us and doting waitresses, who came to know me by name, served complimentary cocktails or sometimes came just over to say hi or show off a new boob job.

Even though Paul’s ten years older than me, his body was strong and fit, and with all the scars and tattoos, he's an anatomical museum. There’s the portrait of his hero, Che Guevara, inked over his right pectorals, a Buddha good luck symbol on his back, a serpent climbing up his neck, and many detailed images of war—a skeleton in a Marine’s uniform, a soldier being shot in the back, a graveyard with one tombstone etched with a fallen comrade’s dying words, “Help me.” The scenes so embedded into his psyche seemed to emerge through his skin.

And then there are the scars—the bullet wounds that earned him his two Purple Hearts, and the thin vertical line running down his chest from quadruple bypass surgery, evidence of mental stress taking its physical toll. So much to scrutinize on that little body of his, and like museum artifacts, I didn't really know what I was looking at until I heard the stories behind them.

“What’s this one from?” I asked late one night as I rubbed my finger over a little crater in his back.

“Shrapnel,” he replied, then went into a war story, as he often did when we lay together. This time he told of his platoon rushing through a rice paddy, caught in the cross-fire amid mortar explosions and flying debris.

“A bullet ripped though my sergeant’s jaw, like in slow motion,” he said. “I can still see the blood in his beard... bullets zooming past our heads, people falling and screaming, ‘I’m hit!’” He re-enacted the battle as if it happened last week. “Then an explosion went off and I went down. They took me to a hooch where they kept the wounded. Because my wounds were minor, they let me help out the corpsmen. All I did was hold the other Marines’ hands, trying to comfort them as they died. A lot of boys were calling for their mothers.”

Paul closed his eyes. All his bedtime stories ended the same way. “Why did I live and they didn’t?” he asked.

I never knew what to say. What was the proper response?

Paul’s narrations moved me to write a poem, the first I’d ever attempted.

My heart aches
to hear the horrors of his past,
the grieving for an ambushed youth.

He remains armed;
the struggle continues within.

I am careful not to intrude, and
offer only the comfort of the present
while I whisper, “Triumph is certain”
for I can see

I don’t know if it’s any good or not, but his eyes welled when I gave it to him and a week later he showed up with another a tattoo. “Ambushed Youth,” it said. 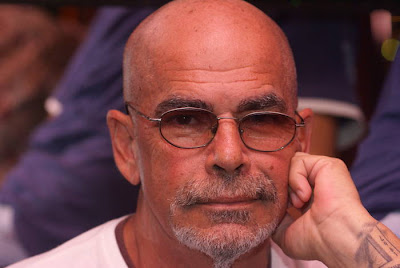 Linda Lou,
This is my favorite blog so far. I have met Paul and I think you have both given so much to eachother. I am glad you danced with him. This is a beautiful story you tell.

I saw Paul recently for the first time in a couple of years. He's still the same precious soul--a wonderful guy who I'm proud to know.

My friend just returned to Afghanistan after a bit of R&R. His visit made me stop in to read this again. I love it! Very Special!