My oldest friend has died. Though I’ve known most of my friends for a longer duration, Mary Pearson was the oldest age-wise. She was 93.

I met Mary in 2002, shortly after I moved to Cedar City, Utah, with my crazy Kiwi ex. Though God knows the two of us went through some, ahem… trying times, I’ll be forever grateful for the fact that when we were together, I never had to work a stinkin’ day job. To keep myself busy, I worked part-time in a psychic doctor’s office (really) and taught yoga at the local Gold’s Gym. I also created a seated yoga program for the elderly, whom I taught as a volunteer at the Kolob nursing home and the Emerald Point assisted living center. That’s where I met Mary.

Usually only about three people showed up for their weekly yoga lesson—Joe, Fern and Mary. Though Mary was frustrated that she couldn’t encourage more residents to participate, the small class size was fine with me since it allowed me to really get to know “my students.”

Joe, a handsome and reserved gentleman, was a distinguished ex-judge who did his yoga from his wheelchair with the determination of a competitive athlete. At the end of each class, he’d take my hand, look me in the eye, and thank me with sincerity for my time. I loved him.

Fern was a beautiful woman with lovely fine features, but her mind had been taken by Alzheimer’s. One day during a stretching exercise, I noticed the second toe on her right foot was missing. I mean, gone at the root.

“Fern, what happened to your toe?” I asked.

She looked at her foot, then back up at me. “Why, I don’t know…” she said with wide-eyed wonder, as if that were the first time she’d noticed she had a missing appendage.

At that time Mary was about 87, one of the older residents chronologically, but certainly the youngest in body, mind and spirit. I was immediately drawn to her positive energy and welcoming smile. We’d visit in her little apartment after yoga class and she’d tell me about the wonderful life she and her late husband, Herman, shared together. I also learned that she was Jewish, which I was thrilled to hear. Growing up, I adored my Jewish girlfriends and by finding the one Jewish person in southwest Utah, I felt I’d won a social scavenger hunt. 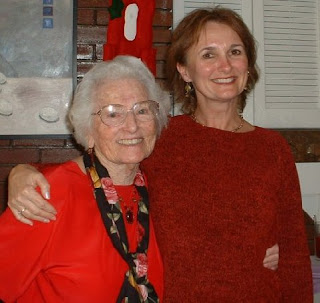 The next year I moved to Las Vegas and Mary and I stayed in touch by telephone. We literally had the same conversation every time we spoke—old people like to tell the same stories—and I enjoyed it every time.

First she’d tell me the latest goings-on with “the Emerald Point soap opera.” Old people also love to talk about each other, and evidently one biddy had a bee in her bonnet about Mary’s friendship with Joe and some of the other male residents.

“We’re just friends,” Mary would explain in her shaky voice. “But you know, Linda, sometimes I do miss a man’s companionship.” From there she’d break into song with, “It’s so nice to have a man around the house…”

“And what about you, darling? How’s your love life?” she’d ask. Every single time.

Invariably I had nothing to report, but these days I’m crazy in love and knowing Mary would relish in every detail, I gave her a call last Sunday. However, instead of her voice, I heard three annoying tones followed by the message that her phone had been disconnected.

Fearing the worst, I called her daughter, Fran, who told me that Mary passed away on February 9. She had a couple of small strokes recently, but a large stroke left her in bad shape, and per her wishes, Mary’s family took her off life support. I don’t get the impression she suffered long.

I’ve often joked that when I get old, I want to be the cutest lady in the assisted living home. Mary was definitely the cutest lady at Emerald Point; she was my hero and role model. I guess we can’t ask for much more than living a full and happy life—we should all look this good on our 90th birthday—but I’m sure going to miss her. 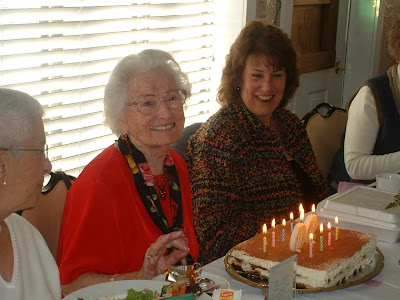 That was a beautiful post! I love old people! I don't want to be one right now, but I love them!

My dad passed away at age 70. He repeated the same stories to me all through life.... seriously! And I heard every joke he knew at least 20 or 30 times. I'm glad you took the time with getting to know Mary... even if you did have the same phone conversation over and over..... I'm sure she's missing you too. *smiles

Very nice Linda. You have a gift for always saying the right thing.

What a beautiful story, Linda. I think there's a whole book here... Mary seems like such a beautiful, happy, inspirational soul. I hope her onward journey is filled peace, joy and many more adventures fulfilled. You are indeed lucky to have known her, and I've no doubt she felt the same way about you. BTW: I'm a nice, Jewish girl from New York. ;-)

Mary seemed like a lovely person, Linda. Sorry for the loss of your friend.

Although it is sad that you lost your friend your story made me smile, which is a lovely legacy, people you don't know and will never meet have been touched by your tale. I particularly liked the part about even when your 86 there is always someone annoyed about you being friends with the man they want, even in a retirement home, it can get all high school, very sweet.

Aw, what a great story. And what a lovely woman she was! How blessed are you to have those memories of her?

I'm sorry for your loss, babe.

Mary sounded like she was a wonderful lady who I wish I had known as well. I'm realizing now that I'm here in a town where the population of elderly outnumbers us in our 40's that they are witty, fun, entertaining and honest.

I'm glad that you were touched by Mary because you also touched her.

Thanks, you guys! I swear, Mary was the cutest person I've ever met. Those were dark days for me back then; the ex was quite a handful at times, and Mary was a wonderful source of support.

Like you, Sandi, I adore old people. They have so much to contribute to our lives, if we only let them in.

@ Debra: Oh, sister, we could so be friends--Jewish girls from New York are the best! I have a post coming up that I think you'll enjoy.

@ the letters: Senior living really is like going back to high school days! The circle of life... Thanks for commenting and welcome to my site!

I love Mary!!! I am sad she's gone but sounds like she had a great life for 93 years!!! She was also very blessed to have you as a friend.

(side note - I am having my dog certified to be a pet therapy dog so we can go visit old folks and cheer them up!)

I love this story.
Sorry for your loss!

I am sorry for the loss of your friend.

Yes, its strange that the older we get the more invivsible we become. People make such big assumptions about the elderly. I feel it now in middleage so I cannot magine what it must be like at 90. As we know our bodies get older but our hearts and minds are the same.

Great post and she sure looks good for 90 in that photo. A beautiful smile and a kind gentle face.