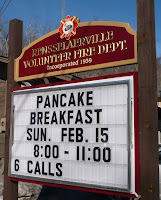 I’m posting a day early—I can’t wait to tell you about Courtney and John’s wedding. If you’re landing on my blog for the first time today, scroll down to last Tuesday and read up from there. It’s hard to believe my little hippie girl and her beloved pulled this off in 1 week’s time.

Everything was perfect! The festivities started, as planned, at 9:30 a.m. with a pancake breakfast at the Rensselaerville firehouse. This is what the bride and groom looked like 1 hour before their wedding. With them is Courtney’s son, Connor, whom John asked to be his best man. That gesture alone tells you why I’m so thrilled to have this guy as my new son-in-law. 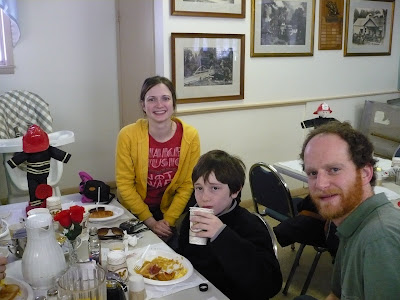 After breakfast we all headed over to John’s parents’ house. Here’s Courtney and Connor just before the barefoot bride made her grand entrance. Quite the transformation, huh? 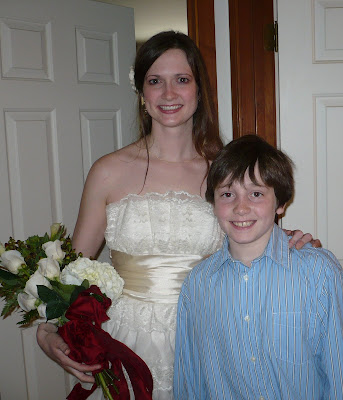 As planned, “Joanne the Buddhist from down the hill” performed the ceremony, and she did a fabulous job. 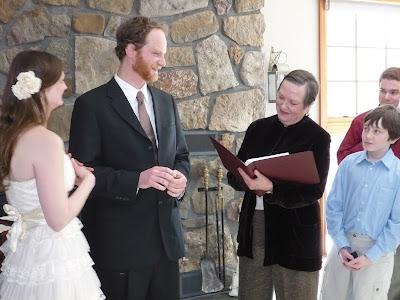 Her words were personal and meaningful, and we all had a laugh when Courtney got in John’s face after he started repeating his vows to Joanne instead of to her. 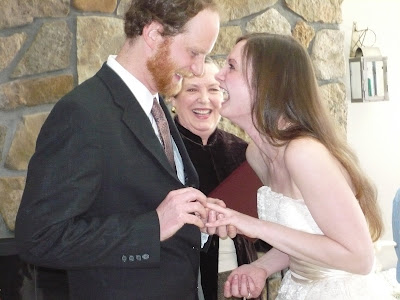 Laughter through tears of joy… it’s a beautiful thing.

John’s parents, Bill and Jeanette, live in their sailboat these days; they flew up from Florida for the big day. They’re lovely people—really, really cool—and can you believe they hadn’t even met Courtney until the night before the wedding?! Do you think they liked her? 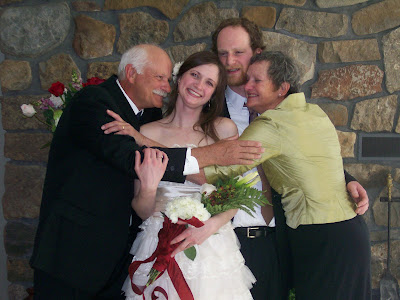 Here’s the happy couple with the parents of the bride. I was afraid my dress would be a little too Wednesday Addams for a wedding, but this was clearly an “anything goes” event. 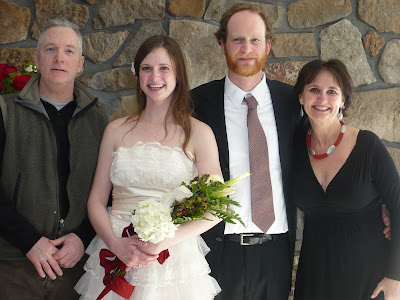 Cake and champagne followed. Note to those of you planning a wedding on a budget: When your guests fill up on a pancake breakfast at the firehouse, there’s no need to put out an elaborate spread.

Courtney: “I’m drinkin’ whiskey, so you know I’m not knocked up.” 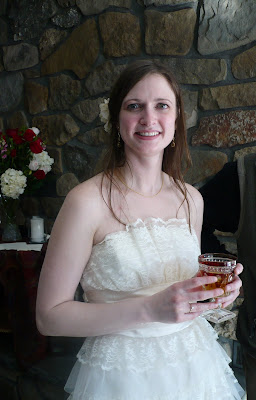 Soon the guitars came out. 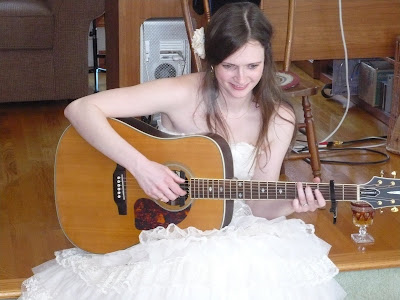 Courtney serenaded her groom with two of her songs, “One Rock, One Soul” and “Sweet Darling,” while he backed her up. 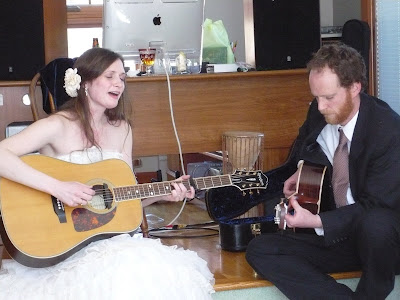 As Courtney sang, John’s mother took my hand and as we watched our childern play together, I couldn’t imagine feeling any happier than I did at that moment. Kleenex, anyone?

As planned, that evening a bunch of us headed to the Palace Theater, a grand old venue in downtown Albany, to see Willie Nelson, who was backed by Asleep at the Wheel. 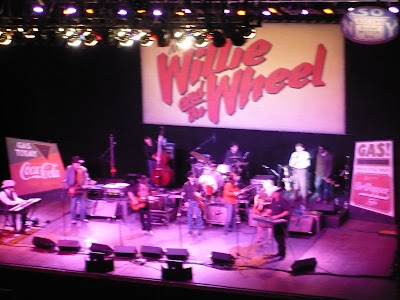 The newlyweds sat a few rows ahead of us, and I think I watched Courtney resting her head on John’s shoulder, his arm draped around her, more than the performers on stage.

What a perfect day. It’s amazing what you can pull off in just 1 week! 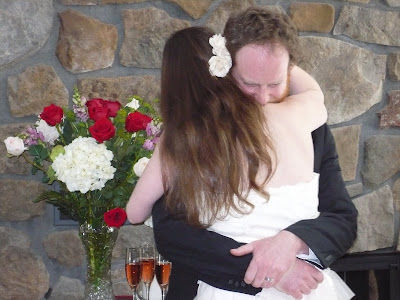 Who needs more than a week to plan a wedding anyway?!? So glad all went well. They look so happy!

Linda, Looks like it was the perfect day. By the way, Connor's smile says Blackwell. He looks like Chris in that photo. Best wishes to you and the happy new family.

That was wonderful! Thank you for sharing. I feel like I was there. Love the brides comment about whiskey!

This proves what I've thought all along that what matters is the whole point of the ceremony- two people completely in love. Your daughter is just beaming in each of those photos. What a great wedding. Thanks for sharing.
-Mutha Mae

OMG, I have huge tears in my eyes! That was seriously one of the most beautiful things I've ever seen. My gosh, are they madly in love or what? And you look amazing. Your daughter looks exactly like you.

I just loved when you described his mom taking your hand. That's when I got all teary. I can only hope when the day comes, my son's mother-in-law will feel the same about me.

I'm so proud for you! What a great daughter you've raised. Cheers to you!

Your daughter is beautiful, you have a wonderful son-in-law, and a handsome grandson, too. You should be very proud--you done good.

And you were smokin' hot in that black dress, too! Didn't anyone teach you that you're not supposed to upstage the bride at the wedding? (Just kiddin', you know I luv ya!)

It's "just WHAT this dreary rainy Monday in Vegas needed".

I cannot brain today. I have the dumb.

What an incredible wedding day from start to finish. Truly beautiful. I cried, as I always do at special events :)

Oh, it was truly the most wonderful event! I'm back in Vegas now, but not quite back in reality. Thanks for all your kind words and best wishes!

Everything was beautiful! But the big question is how were the pancakes?

So beautiful! They look so in love and happy together.

Hey, Linda It's cousin Ricky
Great reading about the big event!
Tell Courtney congratulations and let us know if she stops drinking whiskey!

Gosh, I love weddings! This one is no exception - and I wasn't even there! Thanks for sharing the highlights, Linda! :-)

Thanks for finding me!
I'm new to the blogging world, but I'm glad I can read your blog now :)

Your daughter looked beautiful in her dress!
And I LOVE the necklace you're wearing - very pretty!

Ain't love grand? Awesome post. I'm glad I found you (via Nathan Bransford's blog). I am a mixture of you and your daughter - I'm a humor writer and a rock and roll princess! Come on over and check out my blog. (You can listen to my music there as well by clicking on the Karma Chain links.) Thanks for making me laugh - I especially loved the line "What about penises? I suppose they're off limits, too?" Genius.;-)

Word verif: "trybar" I guess that means I should head downstairs and pour myself a drink!

I'm here because of your comments on Nathan Bransford's blog. You're so funny, and I always enjoy hearing what you have to say. Just from your blog posts alone, it's clear that you can write and have such a strong voice. Nathan should check it out and represent you. Seriously. We all need a dose of good, honest humor right now. You're great. :)

The wedding looks nice too. Such a happy couple. :) I have an eight year-old daughter, and I was thinking of her the entire time I read about the wedding. I can already hear her telling me not talk about boobs in front of her future in-laws one day. :)

I look forward to reading your blog regularly! Best of luck...

Welcome to the new readers and thank you, thank you to those who keep coming back.

Linda, so beautiful! I know you're one proud mama!!!

By the way, I'm trying to figure out how to become one of your followers but I can't find your follower button! LOL

Congrats on having a new son in law.

Thanks, Simone! I just added the "Follow Me" button. I'm a little slow...

I love the pictures! Your daughter is beautiful and she looks just like you!!!

This is the best way to get married. I knew someone who had 12 bridesmaids at her wedding. It was out of control. They got divorced 4 years later.

And a shitload of money later, too, I bet.

The story, the pictures -- all wonderful! All weddings should be this good (and get such great write-ups)!

She looked just beautiful. And I loved her dressed. Suited her so. I agree this is the best way to get married. And she is so much like you! For some reason your photo didnt download so couldnt see you! Yes I think the inlaws are Happy! Very Happy. As they should be.

Better than a fairy tale!! I love the picture with the new in-laws. Thanks for sharing.