Hey, thanks to everyone who sent kind sentiments and positive vibes to Mom. Her gall bladder surgery earlier this went well.

Screeching halt!!! Oh, you are so not reading a post about somebody’s mother’s gall bladder operation, are you?

Wow--what a great response to my book giveaway contest! Very encouraging, and thank you so much, but now I’m like, damn, this book had better be good. It’s not too late to enter—see Thursday’s post for details.

Alright, so I was able to retrieve most of the cougar post that I started to write before my Word file went into the Twilight Zone. A couple of weeks ago my blogging buddy Hurricane Mikey did a post answering a bunch of questions I had about the male perspective of things. Questions like, how young is too young? And how old is too old? Check out what he has to say (Mikey goes for cougars), as well as his readers’ comments. Very enlightening. 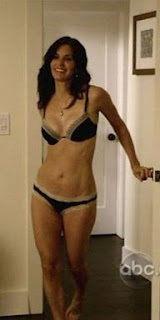 Did you see the new TV show, Cougar Town, Wednesday night? Oh, it was horrible! Truly awful, and I don’t mean fun awful like in a Kath and Kim way (God rest their souls). But Courteney Cox is gorgeous, don’t you think? I mean, she’s no Beverly D’Angelo, but she’s pretty hot. I thought the guys would dig this picture of her in her underwear. More so than one of Beverly in hers.

Despite whatever you may have heard from Hurricane Mikey, I am not a cougar, though I think I told you that back in the late 90s, I had two kids and a boyfriend all in their twenties. I admit that’s kind of weird, and it wasn’t even a brief dating thing; we went out for two years. Then beloved Bastard Husband and I got together; he was 34 and I was 42, but an 8-year age difference isn’t that bad, do you think?

I’ve always gone for younger guys, only because I’m so immature myself. Whenever I told my mother I was seeing someone new, I could hear her roll her eyes over the phone as she asked her first question: “How old is this one?”

But I’m not a cougar, I tell you. Since BH, I’ve stayed consistently within my own age group with the exception of one Iranian med student who I went out with just a couple of times. I think he was 16 years younger than me. My sister Lori met him when she was visiting one time; she just shook her head and said, “You need a gatekeeper.” And there I was all proud of myself for finally trying out a minority, since I’ve never gone for anyone darker than Italian. But yeah, I don’t know what the hell I was thinking with that one.

You have a couple of those "What was I thinking?" episodes in your dating history, right?

Anyway, I really do prefer men my own age, and by that I mean about three years either way. Beloved boyfriend Mike is six months younger than me, and it’s perfect. We have things in common, the same reference points. I can be totally like, “Remember when you heard Gomer Pyle’s singing voice for the first time? Wasn’t that freaky?” and he knows exactly what I’m talking about, and not from Nick at Nite programming. Yep, that’s the type of conversation I treat him to.

I should probably explain that obsession with Beverly D’Angelo sometime, huh? In the meantime, is it me or does Amy Poehler remind you of a young Bev? 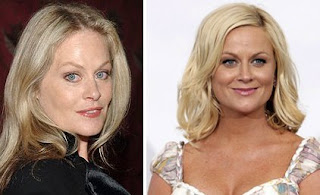 So how about you? How young is too young? How old is too old?

Fun Read,
In my 40's, I am looking at the younger 'men' and thinking yep I could go for that.
My sister-in-law who is in her 50's has never date anyone over 30, when she was in her late 20's, and in her 30's, they barely hit the 20 year old mark. She says "Older men are too much work, I just want to have fun. I don't need anyone telling me what to do or how to live."
I get it now.
Age smage. Go with what makes you happy. Everything else in this world is bad for you, emmm that other stuff is good for you (wink wink)

Well I'm married so I NEVER think about other men EVER!!! But IF I did I would say that I could see being in a relationship with a man ten years younger or so - any younger than that tho' and it'd just be a fling.

OMG, I loved Cougar Town! I identified with it waaaaaaaaaaaay too much. 40's divorcee named Jules who's a realtor with a teenage son? Hello???? Even her friends reminded me of mine. I have uttered some of the same rampages she went off on. I swear, someone heard me and turned it in tv dialogue. Of course, I have not "broken the seal" with a younger man since my divorce but hey, it's only 4pm here in Ohio. Anything is possible!

My ex is 16 years older than I am which is weird because every guy I had ever dated was at least 2yrs younger than me.

I think I have it right now, because my guy is two years older than I am and I'm keeping him!

Hey, inside my own body I have a body just like Courtney Cox has. It has been trying to get out for years.

My husband is ten years older than me. I always knew I needed someone older than me as I was hard work and a total basket case when younger.

I have a friend who married someone 22 years older than her. It was okay when she was 20 and he was a handsome and well kept 42 year old. Now she is 45 and he is 67 - well, even she says it is hard work due to his health issues. But he says it is great because she does everything for him....

I often think that younger men will not be around long in a relationship with an older woman. But perhaps they would be like that no matter who they were with.

At the end of the day however, you just have to do what makes you happy don't you?

heh heh I think I stopped going for younger men when someone asked me once if one of my husbands (some women collect stamps) was my son. Great post...and like Janis Joplin once sang....So ya gotta...if ya wanna love somebody...ya gotta hold on like it's...like it's...the last minute of ya life, baby....
just sayin....
Deborah

I'm so sorry, Linda Lou, I got interrupted and forgot to tell you I'm so glad your mother's surgery went well. She should feel mondo better pretty quick. I had mine out in late August a month before the hyster and it was miraculous! No more nausea and pain. Best wishes and healthy vibes for her!
Deborah

I don't think I could ever date someone younger than me... I would feel old all the time! I've found older guys to be generally more attentive and with less drama, sometimes because they've been "coached" by their former spouse! I like being the younger person in the relationship - having said that, I dated someone 20 years older who was also a smoker, and the idea of becoming a widow or having to take care of a 60-year old cancer patient as a 40 year old woman spooked me, so 15 years older would be my limit, I think... Great post Linda!

I prefer as close to my own age as possible but am open to younger or older. I used to say I had a "ten year window" either way but went out with a guy 18 years younger than me a few times (don't tell his father, he was my boss at the time....)

Drew is 7 years younger. I'm immature too so younger is better than older but really - I don't care as long as its the RIGHT person.

"Too young" is when you have butterflies in your tummy every time you set your eyes on a pretty young thing and "too old" is when you can't remember the name of the women who slept with you last night!

Could I be more correct?

A couple of my Hollywood crushes are starting to get "too old" Morgan Freeman, Sean Connery and my beloved Harrison Ford probably is too. On the other hand - if I were having a fling, those college boys I watch play football on Saturday would be just fine.
I guess I am saying there is no too young or too old as long as it is legal and not hazardous to anyone's health!

I've been with my hubby for 20 years (married for 18 of those). I'm only 3 years older but our friends have labeled me a cougar because when we met, he was a teenager (19 so legal!!). So many years later, they say I was "combing the sand boxes looking for him!"

If I was single, I'd probably use a 5 year difference (both older and younger) but you gotta do what makes you happy!!!

I'm 34 which that math puts at 24 for the youngest girl I could date. For me that's just too young. There's nothing wrong with 24 but I find that age girls are adorable, like puppies.

27 is the age I find myself arrested developmentally these days and that's about where I'd start the dating age. As for upper limit, I don't know, how old are you, Linda Lou? :-)

Oh yeah, I've had the "what was I thinking episodes" a time or two!! I have dated younger men too but I prefer guys my own age at this point in my life. Also I never pursued a younger man, the one's I dated pursued me! So that means I'm not a cougar, right? Glad to hear the show wasn't that good. I missed it but was wondering if it was good or not.

I'm 47 which pretty much makes me ancient compared to most women I know. The funny thing is, I've always been attracted to older women. In my 20s, I thought women in their 40s were exceedingly hot. I still do. I've long maintained that women hit the zenith of their sexual attractiveness when they hit their mid 30s, and often hang onto it well into their 50s. Some, even into their 60s. So I suppose when it comes to which way I look, it's up, not down.

LOL, Linda you know my position on all this. For the rest of you that may not know.... As long as he's not jail bait, it's ok to date younger. As for older, I won't go more than 1 or 2 older than me. Maybe I only feel this way because I haven't met the right one yet though.....

I missed that show! Must look for the re run!