One time I mentioned to my friend Timmy D that I made myself an egg whites and mayonnaise sandwich for breakfast and he was like, “Jesus Christ, Linda, could you be any more of a white girl?” I was shocked to hear that because my junior high and high school were like 50-70 percent black, as if that should somehow make me a little less milky. But when I look at this list of what white people like, I have to say holy cow, I am really freakin’ white.

Well, last Sunday night I had dinner with a couple of my writer friends, one of whom is black. Her name is Judy McFadden and I have to digress for a second because I think it’s funny that Judy has a son named Kelly McFadden. I mean, is that the ultimate Guess-Who’s-Coming-for-Corned-Beef-and-Cabbage-Dinner name or what? Cracks me up.

Anyway, I had a burning Ask-a-Black-Person question because there were a lot of “Remembering Katrina” programs on last weekend and for the longest time I’ve been wondering something: How do black people feel about Jesse Jackson and Al freakin’ Sharpton acting like the spokesmen for their entire race? Because it sure as hell looks like they are to me, and if I were black I’d be pissed.

Judy rolled her eyes and said those two hardly represent the race and the media intentionally sticks a microphone in their faces whenever anything happens to keep black people looking bad. (I realize that now I’m making Judy the new spokesperson, but trust me, I think she’s a much better representative.)

Well, her answer made sense to me and then I came up with more questions: What about Bill Cosby? Who are the true black leaders of today? Why does rap music have to be so mess-you-up-bitches negative?

I hung on her every word. She told me all kinds of stuff black people did in history that never made it into the textbooks. I’m gonna ask her to be guest blogger someday—it will be educational! White people should totally ask black people questions—and vice-versa. I know I would be more than happy to explain why bowling is fun and the brilliance behind Family Guy.

Judy seemed to delight in answering my questions and kept asking if I had any more. But wouldn’t you know it, I didn’t think of the biggest question of all until the next day, so I sent her an email.

When my daughter and I are mad at someone, we say (just in conversation to each other), "He can kiss my black ass." We think the "black" part adds some oomph to it, like we really mean it. So much stronger than "He can kiss my ass." But is that racist? We totally don't mean it to be.

Well, good news! She sent me this e-card with the following message. 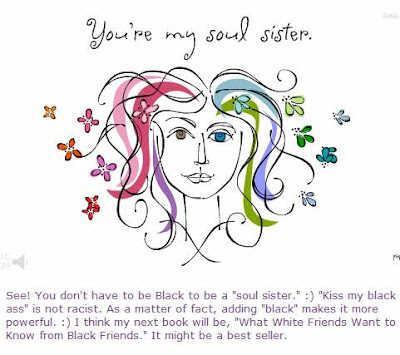 So it’s not racist--yay! I'm really happy because it's totally fun to say.

But seriously, can you imagine if you had to have official spokespersons for your race? If I were black, I'd want Oprah and Wanda Sykes. Well, I think they should be the official spokespeople of the white race, too.

What? You don't like Oprah? Well, you can just kiss my black ass.

LMAO, this was a funny post!! Always something different with you Linda Lou!

OOooo, I wanna be an Ask a Black Person guest!!!

Judy is REAL! I loved her answers because I totally agree. Jesse and Al aren't speaking for me! Neither is Oprah!

One thing that irks me is the curious questions about Michelle Obama's hair. It ISN'T a weave!! Not all Black women wear weaves. I wear "REAL" hair and many other Black women do.

You brought up some pretty good points!

OK I have never told anyone to kiss my black ass. Fat maybe, black no. I don't know why I would even say that? It's not black! It's white and lumpy with cellulite!

Wow, and I wonder why I'm dateless when I put crap like that out on the Internet.

One of my favorite characters in my last ms is a sassy black gal from Philly. I LOVED writing her - so much more interesting than the boring white folk.;-)

I've said white ass, dirty ass and a good woman's ass but not black ass...I don't know why. Not some hidden need to be correct just never crossed my mind. Since you have mentioned it, I will add to my kiss-my list.

Thanks for making me smile.

You crack me up! That's all I can say!

You crack me up! That's all I can say!

I've said 'Kiss my hairy ass' and 'Kiss my shiney white hiney', but I never thought of tossing out the 'Kiss my black ass!' line.

But seriously, Linda, as one who has experienced your Wonder-bread tendencies first hand, the thought of you telling somebody to kiss your black ass would be worth the price of admission, just to see the confused look on their face.

Being of Danish heritage I would have to have Princess Mary as my spokesperson. She wears the nicest clothes and gets to travel.

I have never said kiss my ass - black, fat or white. I have said "kiss me" but not as an insult. If I am angry I will just say "don't shit me buddy".

In the end, you just have to speak for yourself.

Yep you are so very clever and funny.And I think that book would be a great seller - What white friends want to know from black friends. Clever idea.

You should hear the questions I ask LW from a male perspective. It's very enlighting living with a black man and I'm sure he'd say the same things about me.

I'll be glad to guest blog. There is lots more my white friends should know without having to ask. And I am just the person to tell you.

Let me know if you want to co-author a book on the subject. :)

Hmmm when I'm peeved at someone I usually say "bite me" maybe I'll add, "bite my black ass" to give it more oomph ("oomph" - is that a whitey word or what? sigh).

I LOVE you. Seriously.

Linda! This gets my "best blog post of the year" vote. Absolutely hilarious and so honest. Good for you for asking questions rather than continue making assumptions. I just realized, I need a black friend!

I would love to be on the Ask a Black Person Panel! That would be so cool.

Al Sharpton gets on my last good nerve, and Jesse Jackson isn't far behind him. I too get sick of the media acting like they speak for black people.

I don't know your friend Judy's background, but I think that there are a lot of older black people (those who have their own memories of the civil rights movement) that look to those men and others as their spokespeople.

I don't quite know why, but I know that my mom is kind of one of them. I'm not saying that she explicitly looks to Al or Jesse, but she certainly doesn't have a problem with them being made the spokesmen.

I, on the other hand, have a huge problem with it. Mainly because I disagree with 80% of what they say and refuse to even think aobut the other 20%.

You're on the panel, Shakin'! Judy's at least 10 years older than me, and there's no way she considers those two good representatives.