This isn’t a meme or anything, I just feel like spouting off about a few things I’m happy about. 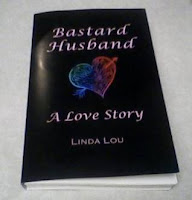 1. Yesterday I got the proof of my book in the mail from the printer. I’m like, Holy cow! I have a book! Like, what did I think? I’ve only been working on the freakin’ thing for five years. I mean, where’s the surprise? There’d better be a book at the end of all this!

I should have my initial run of books in about a week or so. It will still be a while before it’s available on Amazon (I’m going through a separate print-on-demand vendor to handle that), and I don’t quite have my website together yet, but pretty soon I’ll be set up to take orders from my blog readers (that means you) right from this site. Of course, they’ll be personally signed and I promise to use my best handwriting, which is already very neat.

You know, the people in my writers’ group have said over and over that writing the book is the easy part; the real work starts after it’s written. When I was toiling over my manuscript, I didn’t really think that could be true. Now I know it is. I’m going to be busy as hell with the promotional aspect, but I have to do something with my time, right? I mean, it’s better than sitting on my ass watching Family Guy reruns.

2. I’ve been asked to speak about blogging. I love to speak, and that’s good because speaking is an essential skill for authors. And of course, I love blogging!

A while back I asked for your input on what makes a good blog. Thanks so much for your feedback—it’s going to come in handy Monday night when I present to the Henderson Writers Group on the joys of blogging and why writers might consider creating a blog even if they think they don’t need one. Anyone can come to the HWG’s meetings, so if you’re in town, stop by the Clark County Library at 1401 E Flamingo at 6:30 p.m.

3. The new season of Curb Your Enthusiasm starts tomorrow night. It’s no secret that I love Jews, and Larry David, the genius behind this show, is about as Jewy as they get. This season we’ll be treated to a Seinfeld reunion of sorts; it’ll be awesome. 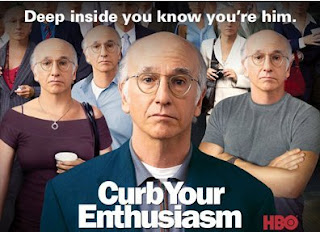 I don’t usually go for older men, but I could totally have a miserably joyful life with L.D. We’re both so picky and annoying, we’d be perfect together—in the train wreck kind of way. I love it when Mike says, "If bet if Larry David picked you up late, you wouldn’t close the door on him.” I don't say anything because we both know what the answer would be. (Larry David would never be late.)

4. Work isn’t sucking like it used to. God knows I’m not cut out to work at a job, period, but at least I’m no longer darting out of there like my ass is on fire.

5. My mother is having gall bladder surgery on Wednesday. I know, this doesn’t seem like an obvious thing to be happy about, but hear me out. Last Sunday morning an ambulance came for her because she thought she was having a heart attack. As it turns out, it was only a gall bladder attack, which is great because that’s something that can be handled with an outpatient procedure and once it’s over, it’s over. It’s not a chronic condition or anything, so yippee!

But still, the experience was quite scary for Mom. She said, “There I was in the bathroom thinking I’m having a heart attack, and what goes through my mind but, ‘I’d better get up. My kids can’t have both parents die on the toilet.’”

So what are you happy about these days?

Yay!! Can't wait for your book

I'm glad things are going well for you :)

What am I happy about these days? Hmmmm well I happen to love the fall. Football, nice weather, holiday season, etc. I haven't seen my parents since they moved me in on August 22nd... they're coming up for parents' weekend in two weeks! So I'm pretty excited for that. :)

Congrats on the book! Woot! Care to give away a copy on my blog? ;)

Funny....my mother is also getting ready to have gall bladder surgery. It sounds awesome- not!

I cant wait for Curb. DH and both love the show. Bring on the Seinfeld peeps!

How satisfying to finally have your own book in your hands - congratulations!

Will you still like me if I confess that I've never seen "Curb Your Enthusiasm"? But I want to! I loved "Seinfeld"

Glad your mom is on the mend - phew - scary!

Congratulations on the book. I can't wait.

Prayers to your Mom.

I'm grateful that today's Saturday and I have no obligations.

congrats on the proof! may it contain zero to no bloopers (I sent mine back 3 times!) and yes, warning! warning! all the fun of creating is about to be overshadowed by marketing...but I'm sure you will find a way to make it fun/funny!

Congrats on the book! Amazon here she comes!!!

Happy about? Well the weather of course since autumn is getting a teeny bit closer every day. I truly hate summer.

Wow! I am happy for you, great news!

I am happy that when my gall bladder decided to eject itself from my body during my hellish divorce, I was only in the hospital for 36 hrs. And that my health insurance paid for everything.

Sending good thoughts to your mama.

I am just happy because the sun is shining.

Oh, okay, I just ate a lovely slice of prune and walnut log - mmmmmm. The taste made my tast buds happy.

Hope your mum is up and about quickly.

So so excited for you! I can't even imagine the thrill of seeing your work in print:)

Glad you Mom's going to be just fine too. Hugs!

Say hi to your mom. Glad to hear that she didn't have a heart attack. Get that gall bladder OUT! Hope to see you soon!

Congrats on the book's arrival.

Making me happy now: Frequent flashbacks of my son's soccer game yesterday. 3 goals, all of them dramatic. The crowd shouting his name, whereas last week it was just "hey #17, your shoe is untied!" The expression on his face after his first goal...pure joy :)

I came out of lurking on your blog to answer! I'm happy that the forecast for tonight is calling for snow. I'm happy that in four short weeks I get to finally see my family after six months, and I'm happy that I have the next two days off.

Congratulations on your book! After all these years, I better get one of the first and it better be signed!! :)

I'll be sure to keep you in the loop about Mom. Thanks to all and welcome to the new commenters!

@ Teton Girl: Snow??? Oh, yeah, that's Wyoming for you. I lived in Laramie for a year and Wyoming is one of my favorite places on earth. I'm a little jealous, but man, I love my Vegas palm trees, too.

Looking forward to reading your book!

You are rocking it! I am so proud of you! Listen, a bunch of bloggers come to town every year in December and we play in a Texas Hold Em Tourney at Caesar's Palace during the day on a Saturday. I would love for you to be there. You'd have blast because you are sociable and I know that a lot of my blogger friends would love to meet you. So, think about it and let me know. I will give u all of the details if you are interested. Also, the more the merrier, so if you want to invite someone, let me know! Plus, I haven't seen you in forever.

How awesome!!! Congratulations..that is truly something to be happy about.

And my Hub could not WAIT for C.Y.E to come back on last night.

Linda congrats on the book. I can't wait to read it. About your mom and the attack. I always wondered what I would think at that moment. Priceless.

I'm happy your book is coming out! I can't wait to read it!!!

Congrats to you for all of the hard work.

Let us know how your mom does. I'm so glad it wasn't her heart.

Congratulations on your book, love, I cannot wait to order it! I'd have to agree--I'm so overwhelmed with all I have to do to get mine published, sometimes I want to hide in my closet. If I could get the laundry out of the way. Your mom should feel better in no time- I had my GB out less than a month before the hyster and I felt so much better immediately!
Deborah

Well! I'm rather jealous of your palm trees and lights. I love Vegas! We had a streak of 70's but the high for tomorrow is only 40!