Are women really not as funny as men?

Adam Carolla, who I just wrote about last week, is at the center of a lively conversation going on over at The Huffington Post  Evidently, when asked by a reporter from The New York Post if he hated working with women, he replied,


"No. But they make you hire a certain number of chicks, and they’re always the least funny on the writing staff. The reason why you know more funny dudes than funny chicks is that dudes are funnier than chicks. If my daughter has a mediocre sense of humor, I’m just gonna tell her, 'Be a staff writer for a sitcom. Because they’ll have to hire you, they can’t really fire you, and you don’t have to produce that much. It’ll be awesome.'”

The Huffington Post article reports his response to his critics, which was, "Everyone can kiss my ass, I don’t care."

Let me put on some fresh lipstick and be first in line to kiss Adam Carolla's ass!  I love that I can count on him to speak the truth as he feels it and with no apologies.

Here's more of his response, as reported in Uproxx:

Working for yourself, calling your own shots.  Now that's freedom. I love this trail that pioneers like Adam Carolla and Louis C.K. are blazing.  They're their own men and they can play by their own rules; they have to answer only to themselves.  Louis C.K. is selling his own goddamn tickets for his tour on his website and his fans benefit from lower prices.

So... are female comics not as funny as men?  Take a look at what the late Christopher Hitchens says in this article:

"There are more terrible female comedians than there are terrible male comedians, but there are some impressive ladies out there. Most of them, though, when you come to review the situation, are hefty or dykey or Jewish, or some combo of the three."

I can see his point on the last statement--that just seems to be the reality--but totally disagree with the first.  Look, there are fewer female comics out there, so the proportion of super-funny women to super-funny men is going to be lower. But by sheer numbers, there are MANY more terrible male comedians, because there are many more male comedians. That’s just math.   Some female comics suck, some male comics suck. And the truth is, at some point we’re all gonna suck.

And who the hell cares?  Taking offense is a choice.  I'm not offended if anyone thinks female comics aren't as funny as men.  So what?   I say let’s toughen up and get back to writing jokes.

What do you think?

P.S.  Speaking of freakin' hilarious female comics, I'll be doing a set Saturday night as part of the G Spot Comedy showcase at Choices Pub on Cheyenne and Rainbow.  I don't really do bar stages that much anymore, but I always have a blast there.  (It's the "black people love me" stage.)  This typically is a crazy show--check it out if you're in town. 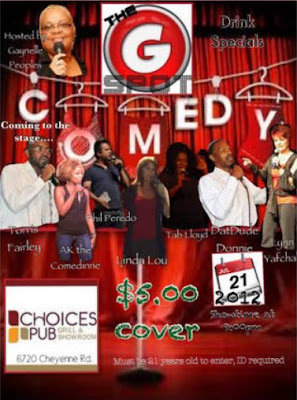 A good example of why I was so surprised that you're such a big Adam Carolla fan...

Dude, I can't figure myself out.

I have a hard time coming up with additional names. Oh ... but if Moms Mabley was still around ...

I think a lot of men (and some women) can feel very uncomfortable with women being humorous because it challenges the stereotype that women should be more "ladylike".

We have a female comedian here by the name of Judith Lucy who I find very funny yet my husband can't stand her because she has HAIRY armpits. So the hairy armpits appear to invalidate her humour.

No wonder he finds me less amusing in winter when I let all my hairs hang out.

The G Spot!
What a fun little show that is.

What does it really matter how many female or male comedians anyway. It is what you like to do and that is all that really matters. That is how I look at it. Do what you enjoy doing and don't let anyone tell you any different.

There are a hell of a lot of really funny women.
Linda Lou (my close, personal friend)
Wanda Sykes
Susie Essman (love her)
Roseanne
and plenty of other female stand-ups I've seen over the years whose names I cannot remember because they never got super famous but made me pee in my pants. SO THERE.

@ Linda: I'll have to check out Judith Lucy. Thanks for the tip. Is she funnier than you? (You kill me!)

@ grrouchie: Hope you stop in Saturday night. BTW, when will I see you on stage?

@ Debbie: I love Wanda, Susie (who lives near Albany), and Roseanne, too. Susie's character on Curb is classic!

I think that I fall in the category of hefty dykey but, definitely not Jewey. But, who gives a shit hefty masculanized women are funnier than most scrawny balding dudes any day. Why? Because unlike them we know what's funny, we know how to laugh, and we aren't all butt hurt because Progaine isn't covered by insurance. Not that it matters to me because my hefty ass is only a couch comic therefore they have nothing to worry about. LOL Seriously though, there are many funny women comedians and most of them if not all of them are vulgar, which is just the way my dykey loooking hefty ass likes 'em.

We have a lot of funny female comedians here in the UK. It depends on the humour too. I'm more into observational humour than comedians that tell jokes. "Toe men went into a pub..." Yawn.

I prefer the observational humor, too. It's cool when somebody's grandpa tells a joke, but it's not what I want to see on stage.