It's all fun and games until somebody...

Did you have a nice 4th of July?  It was cloudy and a little sprinkly here in Las Vegas, which is very unusual, but it wasn't a washout and kept the temperatures lower than the 100+ norm.


I spent the day lazing around, enjoying the first day to ourselves since before we left for Albany on June 7, and did whatever the hell I wanted.  That turned out to be sequestering myself in the master suite, watching the new Showtime series, Episodes, with Matt LeBlanc. 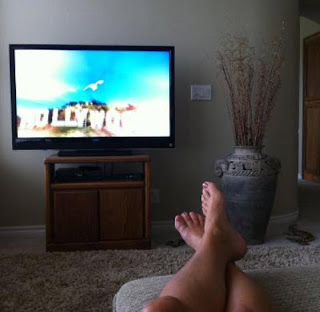 I've never been a big fan of Matt Le Blanc (Joey from Friends), but this show is hysterical.  LeBlanc plays a not-so-flattering version of himself--kind of like Larry David's character in Curb Your Enthusiasm)--and he pulls it off perfectly.  If you don't get Showtime, do what I did:  Call your cable company and tell them you're thinking of canceling your service because between Hulu and Netflix, what the hell are you paying for, and ask what they can do for you.  Just by calling, we got three months of HBO, Starz, Cinemax, and Showtime for free.  Give it a try!  I'm a big TV fan, and the premium channels have some excellent programming.

After a day of blissful non-productivity, Mike and I headed to the LVH, which everyone on earth still refers to as "The Hilton."  We have some friends who are high rollers and they invited us to the VIP party.  Very cool!  They had a buffet spread and a band in the ballroom, and then a bunch of us went up to a penthouse suite to watch the fireworks.  Livin' large! 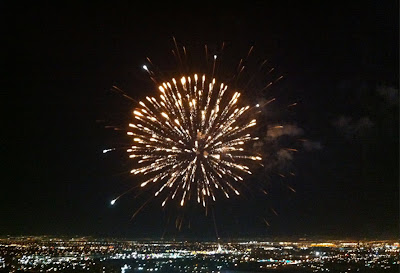 We're so lucky to have friends who are so kind to us.  And guess how our friendship came to be?  I TALKED TO A STRANGER in Starbucks.  Wasn't I just telling you how important it is to talk to strangers?

After the fireworks, we had a drink in our friends' suite and then... I know you think I'm gonna say we had some fireworks of our own since we finally had the house to ourselves, but... Mike and I broke out the Scrabble game.  The night before, we played until 2 a.m.; he won the first three games and then I slaughtered him in the last game, winning by over 100 points.  I knew he wanted revenge; he likes to win.

So last night I won the first game, and then I was ahead the second game by about 130 points, and then...

Sorry... the remainder of this post has been CENSORED!

Aw, Linda, you're such a tease!
Anyway, glad you had a great 4th July!

LOL The only way I can beat my Hubby at scrabble these days is by making it the censored version:)

It was 102 out here on the 4th. We went to Summerfest to see a concert. I will write about it on my blog. But it was hot and humid here.

I am glad to hear that you enjoyed your night.

So glad to hear you enjoy Episodes. I thought you'd like it. It's a favorite of mine, right up there with Curb and Louie.