How did I not know about Dino's Lounge???

Last Thursday night I got a text from my dear friend Kri asking if I wanted to meet her at Dino's at 9:00.  Given my piss-poor mood lately, my answer was a resounding "YES!" even though I had no idea what Dino's was. Barbecue joint?  Gay bar?  Didn't matter.  Okay, I have to admit, there was a tiny voice in the back of my head that said, "But Linda, Louie is on tonight..."

Wow, am I glad I went. As it turns out, Dino's Lounge, on the corner of Wyoming and Las Vegas Boulevard (just north of the Stratosphere) is the gold standard of dive bars.  You know me, I love a good dive bar, especially one with a motto "Getting Vegas drunk since 1962."

The place was still pretty empty when I got there, but started to fill up before the karaoke started at 10:00.  I'm not super into karaoke--my voice sounds like an ironing board opening--but there was some interesting stuff going on.  The host was awesome and most all of the singers were good.  Some, like Kri's gorgeous friend Trey, were really good. 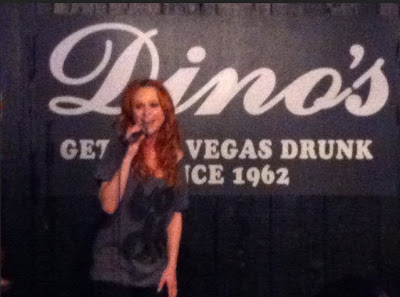 The music, though, was secondary to the people watching.  Dino's has a reputation for attracting all walks of life, and there was every type you could imagine:  a normal looking businessman in a suit, a woman with a mullet and a dress wedgie, a guy in a poncho and a beret, a girl in a super sexy micro-mini celebrating her birthday, a man with a handlebar mustache, and this here diva (who most definitely does not shop at Ross). 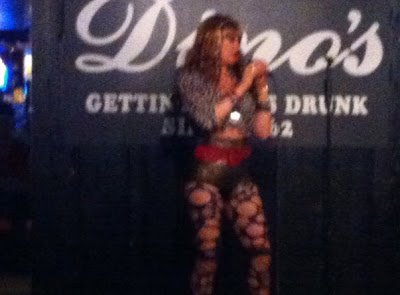 I swear, the place was like a human museum.

As with all dive bars, it's a bit smoky in there. I'm sure that within six months one particular raspy-voiced singer will be holding the microphone to a hole in her throat.  But what a blast.  There's something extremely joyful about being in the middle of folks from every point on the spectrum, and to hear people sing!  It's a beautiful expression.

Yep, one minute I'm putting a pork roast on the table with the husb, his kids, and his ex-wife gathered around, and a couple of hours later I'm high-fiving a friend while an Asian Rat Packer sings Sinatra. 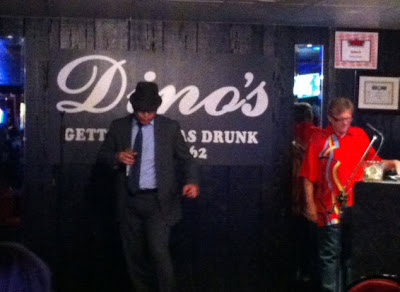 What else am I missing?  What other Vegas treasures I should know about?

Definitely, grrouchie. I think you will dig it.

Just popped over from Barbara's blog. The place looks like a load of fun. Being a Brit, I amazed there's any bar where you are still aloud to smoke. Wow, just like the good old days.

Unfortunately, smoking is everywhere in Las Vegas. But I don't mind it as much in a divey bar as in a restaurant when I'm trying to eat.

Thanks for stopping by--hope you come back!

Sounds like a fun place for people watching.Thanks for the tip!

Linda, there's actually a place in Las Vegas called The Dive Bar. Name tells all. Maybe you already know about it. If memory serves (and it sometimes doesn't serve me very well), it's out East Tropicana, buried away in a tiny strip center, not readily visible from the street.

I must admit, I played there one night in the very twilight of my career. Everybody's gotta be someplace, right?

Sometimes the old dive's are the best. john

I have heard of the Dive Bar, Mike. I'll have to check it out.

Hey Linda!
I'm glad you found the Vegas gem called Dino's! I grew up here and only recently discovered it myself. I guess it was about 3 years ago. I even had my picture taken by the parking lot sign designating the "uber-handicapped" spot...or as the sign reads, "Monthly honorary drunk" (or something like that)...it's been a while and a few beers ago! I always have a good time there. It's the first time I ever saw a live beer-pong table with "beer athletes" stretching before a match...while I was trying to watch the black and white vintage 1950's "porn" on Dino's TV's.
WHAT'S NOT TO LOVE?
:)
Dareece

Seriously, Dareece! What's not to love?