If you visit me, I'll cook* for you

I was bummed that I didn't get to see Hurricane Mikey while he was in town this past weekend. It was my own fault; I just couldn't get it together. But the good news is, the big man is blogging again. That's right--he's back and better than ever, though at 160 pounds lighter, he's nowhere near as big as he used to be. And he has plans. Yep, he has plans...

Tonight I did get to see one of my most loyal readers.  I met Linda and her husband, Bob, for drinks a couple of years ago when they were visiting Vegas and thought they were awesome. They're from the Middle of Freakin' Nowhere, Wisconsin, and have that Midwestern sweetness that is just so endearing.

Here they are tonight in my kitchen. 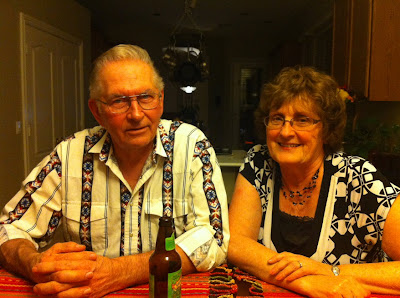 Oh, hell, yeah--my kitchen!  Usually when readers or other bloggers come to town, I have to meet them somewhere, and it's usually somewhere on the Strip. But these two had a rental car and were willing to come to me, which was just fantastic since, you know, I'm a working girl these days and don't have the kind of time I used to. But even after toiling all day in the office, I still made them a delicious dinner.


This stuff is the BOMB! So what that it has a million calories and a billion grams of fat? It's freakin' delicious.  I've been making my own lasagna for decades--literally--and I'm telling you right now:  never again.  Why go through all that layering cheese and noodles when you can stick this in the oven and an hour or so later, you got yourself a meal. Seriously, it's that good.

Do you love Costco or what? Mike and I were there on Sunday. Because we're on a health kick lately (again), we decided to forgo the $1.50 hot dog and Coke special and instead opted to dine at the Costco buffet (if only they could put those little stations a little closer together) and save ourselves three bucks. I tasted a veggie burger and I actually liked it until the woman said it was made with soy. Soy is one of those things I won't eat just because I don't like the sound of it.  I will, however, think nothing of eating a hotdog, which is essentially a tube of pig anuses.

Anyway, Linda and Bob are so nice; I felt a little guilty about not doing a super cleaning for them.  Like the place was certainly presentable, but just between us, 10 minutes before they arrived I was spot cleaning the kitchen floor with a paper towel and a spray bottle of Mr. Clean.

And I didn't feed them dessert, either. 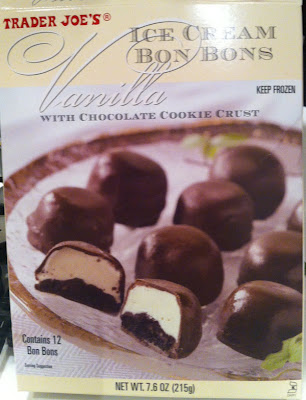 No, I had only two bon bons left in the freezer, which I totally could have offered to them, but then what if they said yes? There would go my bedtime snack! Some hostess. Seriously, these things are the perfect little treat when you're dieting. You know how you feel a little guilty when you're heading back to the freezer for that second bowl of ice cream? Well, at only 60 calories each, you can have two of these and live totally guilt free!

So there you go--two healthy eating tips from me.  Which reminds me, thanks for all the tech tips on my last post. My meeting is tomorrow. I'm going to write up all the tech tips we talk about and post them for you to download.  Fingers crossed it's not a cluster.

Anyway, the bottom line is, if you come to Vegas and don't make me go to the Strip to see you, I will heat something up for you and wipe the stains off the kitchen floor. I can't guarantee dessert, but I will give you beer. Fair enough?

Oh, one more thing. My guests and beloved husband were all talking about Catholic stuff at dinner, and I swear, when I heard the new pope's name, all I could think of was this:

Come on, I know I'm not the only one.

Talk about perfect timing. My wife and I are leaving for Vegas a week from today for a 4 day getaway. I can already smell the home cookin! :)

I can attest to Linda's "home cooking". I've had it.

So I guess I'll be heading your way soon!

Just give me a head's up, grouse! I may need to make a trip to Costco.

I love those Trader Joe's BobBons!!!!!! Yes, a lot of people from Wisconsin are very sweet. I think people in the middle of this country are so different than the ones on the borders. In a good way. Not to knock the rest of us....you know what I mean.

Oh Linda, you are too sweet, but I would totally feel like I was imposing. But, if you would like to mabye meet up for a drink or 6, the wife and I will be out and about. The only thing we know for sure is we are going downtown on Tuesday night just to hang out at a few bars we like down that way. Take care.

Agree, Barbara. The border people are awesome, especially New Yorkers and Bostonians. I love their honesty--you never have to wonder where they're coming from!

grouse, I just may be downtown Tuesday night. My niece and her boyfriend will be in town and I'd like them to check out the Griffin.

Well, you were out of town when I visited in February and my schedule was jam packed in December, so I hope to meet you in perhaps June. Going to your place would be cool as long as burping (beer) and undignified eating (lasagna) were in order ...

Beer and lasagna in June it is!