Sometimes even I'm sick of the sin

You know I absolutely love living in Las Vegas. (Actually, I live in Henderson, but close enough.)  I love the sunshine, the mountains, the fact that I can lie poolside in February... I love that this is what I see on a walk through my neighborhood. 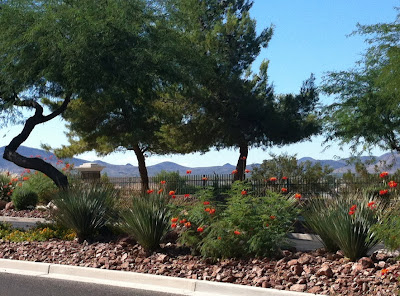 I've made a life here that I never could have dreamed of. Anyone can reinvent themselves in Las Vegas, and as many times as they want. There's no place like it.

But there's definitely a downside. Traffic can be a pain in the ass and the never ending road construction makes it all the worse. I lived in Albany for 43 years and it seemed like there was construction once in a while, but for the most part, when it was done, it was done. I just don't understand why they can't finish things up here.

I don't like that education isn't valued. To be sure, I have a lot of friends who have advanced degrees, but the overall culture here doesn't seem to put education as a high priority. Newscasters don't use proper grammar, though last week I heard Piers Morgan say, "three a.m. in the morning," so I guess I'm rolling my eyes on a national level as well.

But what's really starting to get on my nerves is the "sin" aspect of Sin City.  I love sex as much as the next person--okay, probably much more--but sometimes I look at the giant sign on Bally's or get behind a taxi advertising a row of thonged butts and think, enough already.  I'm sick of looking at tits and asses. 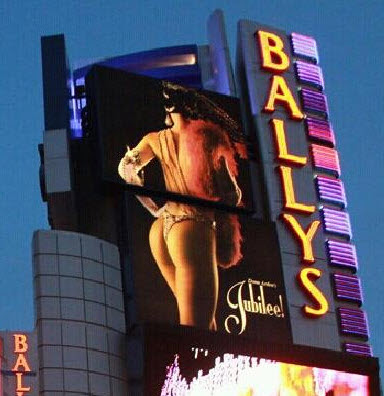 Last Saturday night I was listening to a band in the showroom of a casino that "loves locals" with my girlfriend Donna. Sitting on a banquette sipping drinks before the show, we watched a guy, who I'm gonna say was about 65, come in with a woman on his arm in a super short and super low-cut dress with super high heels. I'd put her somewhere around 45, and she resembled the actress Andie MacDowell.

Well, they sat right next to us and almost immediately started in with the PDA.  Donna and I looked at each other like, really?  At first we thought they were a married couple on their date night, but after a while we thought, who the hell over the age of 16 makes out in public like that?  Any adults with that kind of passion would just get a friggin' room.  And they did. not. stop. for the entire hour and a half the band played, and obviously neither of them could give a shit about the music.  It was like a car wreck that you just had to watch. She was very attentive toward him, rubbing his leg and all, but when the guy would whisper in her ear, she'd glance off with a totally vacant look. "She's working," I said to Donna, who wasn't quite convinced until the guy left to go to the men's room and his babe immediately started pecking away on her cell phone. Probably setting up her 11:00.

Oh, just puke, ya know? They were disgusting. Normally I'd dismiss it with a wave of the hand and "That's Vegas for you," but I really wanted to throw my drink at them.

On February 21, two innocent people, a cab driver and his passenger, were killed on the Las Vegas Strip because they were in the wrong place at the wrong time and found themselves in the middle of a war between two pimps. I have a lot a respect for cops--my son-in-law is a New York State trooper--and God knows the Las Vegas Metro police force has their work cut out for them, but for Christsake, I can't drive to work in the morning without seeing commuters pulled over every half mile. That's taking up a lot of manpower, no?

Mostly it's the highway patrol, but the Henderson cops are even worse. In my 27 years of driving in upstate New York, I was pulled over once. Once. Here, in less than 10 years? Five times. Every once in a while when I'm at a party, I'll do a little poll and ask people how many encounters they've had with the Henderson cops.  Nearly everyone has been ticketed at one time or another, and like me, these aren't people who've lived here their whole lives. Mike just had his day in court back in January, and actually won, which is rare.

My point is, do we really need a force of overzealous traffic cops when there should be much bigger fish to fry?  Like are all the rapists and child molesters locked up already?  All the cold case files solved?  I say crack down on prostitution, get these friggin' pimps out of here. Call me a prudish old fart, but I'm getting sick of the sleaziness.

And this is the worst. Longtime readers have heard me talk about my beloved 25-year-old BFF, Joe, whom I used to work with. He's 28 now, but I love that kid and he's one of the funniest people I know. Well, take a look at what happened to his ex-wife, as reported by Channel 8 news. Please, I beg of you to click this link to see our justice system in action, and be sure to check out the judge. Lovely. I'm disgusted.

Why are our public servants not serving the public? And where can we ever go to complain?  This is weight on the scales for why I'm starting to get a bad taste for this place. As wonderful as it is.

Write on, Linda! I'm traveling, '50 States in 50 Weeks' on a motorcycle with my wife and we flew back to see new grandbabies and got a ticket in Henderson. Illegal right turn. I've had two trucks stolen and no investigation. They just take the information and you're a statistic for more budget money. One pickup was locked and running in front of an apartment building. Knock on some doors, break out the bracelets and bye bye thieves. Nope. It's pretty frustrating. And now, they need budget money, so there are big fines.
Enough! Stay funny Linda!
KP

It would take a group effort to turn things around, police wise. On occasion there is hope. A judge in Ohio may be putting a stop to the red light cameras saying they are just a money scam for revenue.

Ok, sure, it has its downside, but every place does. I left for 18 months, and I came back. Because, IMHO, Las Vegas is the best place I've ever lived....and I've lived ALL over this country.

It appears that there are some very sad tradeoffs one must make to live in Las Vegas. Many people who I have known have talked about how living there got to them after some time.

Linda, perhaps you need to run for city council? It does indeed sound as if Henderson is a vortex for moving violations, and prosecution thereof. But, you know, moving violations are the gateway crime. Next it'll be drugs and pimping and there you go.

That view from your neighborhood looks lovely.

1st - I thought a PDA was a hand held assistant, like Palm Pilot? So what the hell were they doing PDA'ng. Can you even mention it on line?
2nd - Henderson has always been a blue collar town with little culture and smarts (see also Malim/Arena), but as to cops and politicians, I don't see much difference from my home town of Chicago.
Your client, Grandpa Unfatootzer.

What on earth do hookers, waiters, bartenders or luggage luggers need education for. Its Vegas, get used to it.

I'm curious about what the cost of living is like in Vegas if most people work in the service industry and are not very educated. How do they survive?