A fantastic performance -- thank you, Arlo!

Last Thursday night Mike and I had the pleasure, and I mean pleasure, of seeing Arlo Guthrie perform in Reynolds Hall at the beautiful Smith Center in downtown Las Vegas.


I've always been a fan. I remember seeing Alice's Restaurant in the theater when I was barely old enough to go to the movies with a friend and no chaperone.  I loved it. When I was a kid I wished I'd been born several years earlier so I could be a part of the whole peace and love hippie scene.  (Of course, now I'm just as happy that I was born in 1957, not 1947.) I'm always thrilled when in conversation I make a reference to the Group W bench and someone actually understands what I'm talking about. 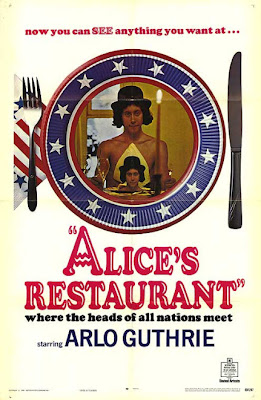 One of my favorite scenes in the movie is the one where Arlo visits his father, Woody Guthrie, in the hospital. Pete Seeger serenades the folk hero, who is confined to bed and unable to talk or move due to Huntington's disease. (Woody Guthrie is played by Joseph Boley and Arlo's mother, Marjorie Guthrie is played by Sylvia Davis.)  Take a look here. Sitting through the ad in the beginning is worth it.

I'd seen Arlo perform a couple of times before.   Chris (my first husband) and I took our son Christopher to his first concert--Arlo Guthrie and Pete Seeger at the Saratoga Performing Arts Center.. Christopher was about 5 years old, so it had to have been 1983. I remember he wore a little denim jacket and fell asleep before the show was over.  Then several years later Chris and I saw Arlo again with his band, Shenendoah.

He was a wonderful performer back then and has gotten even better over the years.  His show last Thursday night was perfection; I could have listened to his music and his storytelling all night.

Oh, his storytelling!  What a gift.  His tales were an entertaining musical history lesson that gave us a privileged glimpse into life as the son of a folk icon. I loved hearing that Woody would cut out newspaper articles that gave him inspiration for songs and later remarked to Mike that I'd just gotten the same advice in a comedy workshop as a means of finding inspiration for jokes.

Arlo talked about the earlier segment of the tour when he got to perform with his children and grandchildren--14 of them on stage at once, I believe he said. He relayed a couple of sweet stories about his wife that pulled at my heart. I'd read that she'd passed away in October; Arlo broke the news to the uninformed by saying, "We celebrated our forty-third anniversary last fall. She was sick and didn't live much past then..." and simply continued on. You kind of had to pay attention to catch it; I thought it was a brilliant way to weave in that sad fact.

As I sat there, I thought of what it must be like to be with someone for 43 years, enjoying a bunch of children and grandchildren together and entertaining people together throughout the country.  As blessed as my life is, that is something I'll probably never have--over four decades with someone. But I consider myself to be extremely lucky that Chris and I always been on such good terms and that I get to see him and our children play music together now and then.  One of the highlights of my life was last summer when I got to headline on the same stage with the Blackwell Sinners.


A good concert gives you plenty to think about and stays with you long after the performance is over. Man, I'm so glad we decided to go see Arlo. And one of the thoughts that's been going through my mind is, I'm so glad that he's sharing his talent.

So...how are you sharing yours?

I have always loved Woody, Arlo, Pete, The Weavers. I took a singer/songwriter workshop with Ronnie Gilbert a few years back -- it was a high point in my life! (She loved my voice and encouraged me to keep singer whenever and wherever I could - blush). You are so lucky to have seen Arlo in concert. I didn't realize his wife had passed. I watched the clip - he and Pete look so YOUNG, and I guess they were. Music is in their blood, their DNA, and they'd be playing even if nobody ever listened.

Especially on this sad and weird day of the bombings in Boston, I need to be reminded of all the wonderful people who populate the world and share their gifts with us. I like to share my photography and my voice, and my writing. Doing my best to pump the good stuff into the world.

You are a love, Linda!