I got to see The Monkees and I'm still walking on air!!!

I've been a fan of The Monkees since forever.  As I wrote in this post after Davy Jones died,


"When I was no more than ten years old, I’d run to the A&P to pick up the latest 16 Magazine the day it came out.  I’d pore over it in the tiny back bedroom of the upstairs rented flat we lived in before my parents bought the house on Lincoln Avenue, gazing lovingly at pictures of Davy, Peter, Mike, and Micky.  Little did I know that would be the beginning of a life of boy-craziness.


"I listened to my Monkees albums, which I bought with my own money, for hours on end on my little record player (complete with the penny I’d place on the needle to prevent skips).   I’d read every word of the liner notes and stare into each photo, imagining what it would be like to meet them in person.  I was sure that if Davy and I knew each other in real life, the twelve-year age difference between us would be totally insignificant.  I'd be out of high school before he turned thirty.  We would make our relationship work."

Well, for ages I'd been seeing the advertisements in the paper and the giant sign outside Green Valley Ranch proclaiming the surviving Monkees' concert on Saturday, August 10. Of course, I wanted to go; I just never got around to buying a ticket.  So yesterday I woke up with two items on my agenda:  1) Take Connor to the airport at 3:30, and 2) Get a ticket to The Monkees.
First things first.  While my coffee was brewing, I posted this on Facebook:

What the hell, right?  Well, my pal Lisa Gioia-Acres was able to score tickets for us, and for free!  I would have gone no matter what, but there's nothing like free tickets.
Even though I'd known about the show for months, I could have jumped out of my skin at the realization that I would actually be seeing The Monkees.  I left my house waaaay early so that if I got pulled over by the Henderson Police or got in an accident on the way, I'd still make it on time.  I'd better not have a heart attack or have some goddamn thing happen before the show, I thought.  Because that's just the way I think.
I got to GVR without incident and had a drink with my friend "Thewc Chronicles," an improv performer I know through my comedy circle, while we waited for Lisa to arrive.  Well, you think you know somebody until he tells you he's been to 13 shows of The Monkees, 5 solo Davy shows, 3 solo Micky Dolenz shows, and 2 solo Mike Nesmith shows. I was like, "Dude, that should have been the first thing you told me when we first met."  He's a great guy, but those stats would have skyrocketed his status immediately!
Lisa scored the $100 tickets in one of the most expensive sections, and I'm telling you, had we paid 100 bucks apiece, the show would have been totally worth it.  When Mike, Peter, and Micky took the stage, we screamed our freakin' lungs out. 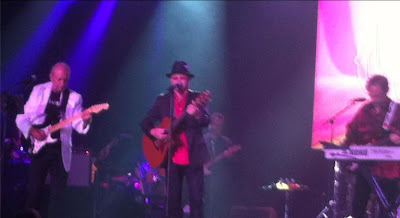 I mean, we were SCREAMING all night. Like abduction screaming, except we were screaming with happiness. The guy in front of us kept having to stick his fingers in his ears. 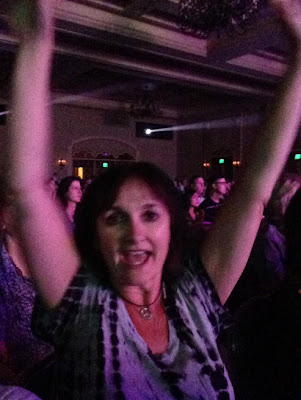 A word about the crowd. I really expected a decrepit bunch of old folks, but that wasn't the case at all.  These people were alive, and so into it.  And it wasn't all women, either.  In fact, I'd say it was 50-50.  Mike (husband, not Nesmith) would have gone if we didn't have the kids.  (BH and I saw Davy Jones together 10 years ago--he liked The Monkees, too.)  And check out this fan: 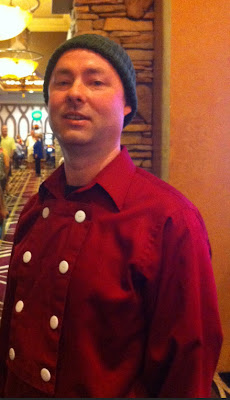 Anyway, the show was FANTASTIC!!!  You might wonder how that could be without Davy, but the guys pulled it off beautifully.  Yes, Peter is now 71, Mike is 70, and Micky is a mere 68, but they looked spry, moved well on stage and sounded amazing.  At one point, Lisa said, "I could go to every one of their shows," and I was like, "You took the words right out of my brain!"  I could totally quit my job and be a Deadhead for The Monkees. Kind of like my friend Thewc Chronicles.

Earlier today I was trying to remember the songs they played, and sent a Facebook message to Thewc asking what he could remember.  In true Deadhead form, he sent me the entire set list:


Last Train to Clarksville, Papa Gene’s Blues, Your Auntie Grizelda, The Kind of Girl I Could Love, She, Sweet Young Thing, I’m a Believer, Steppin' Stone, You Told Me, Sunny Girlfriend, You Just May Be the One, Mary, Mary, The Girl I Knew Somewhere (Michael lead vocal), Early Morning Blues and Greens (Peter lead vocal), Randy Scouse Git, For Pete’s Sake, No Time, The Door Into Summer, Words, Tapioca Tundra, Goin’ Down, Porpoise Song, Can You Dig It, Circle Sky, As We Go Along, Long Title: Do I Have To Do This All Over Again, Daddy's Song (Video of Davy from Head), Daydream Believer, What Am I Doing Hangin' 'Round?

I was hoping they'd play my favorite Monkees song, "The Door into Summer" and was thrilled to hear it live.  Lisa captured a little bit of it on the video that follows.  You'll see that the boys sounded really strong, and throughout the whole show there were videos from the old TV show and a few clips from The Monkees' 1968 psychedelic feature length movie, Head. Courtesy of Thewc, you can watch the movie in its entirety here.

You may be wondering how they did "Daydream Believer" without Davy. Well, they picked a guy out of the audience to lead the crowd in singing it all together, as you'll see in the video.  (Lisa has both songs on this video.)  Oh, the emotions!  People were wiping tears and hugging strangers.  Lisa and I were hugging all night.

Before you play this video, I gotta warn you.  Lisa did a great job with "The Door into Summer," but
you may get seasick toward the end of "Daydream Believer."  Who could blame her for swaying with the music?  It's pretty funny, but I could still cry over Davy. I've already looked at this a hundred times.  I can't get enough. And you'll see I wasn't kidding about the screaming.

I swear to God, this was one of my greatest nights ever.  Such JOY!!!  This tour is almost over, and  I hope The Monkees add more dates.  If they come to your town, don't miss them!

Oh this makes me SO HAPPY!!!! I feel your JOY! Thanks for sharing your awesome Monkees' night with us. Love you! xoxox

ah, so funny. It makes me feel good seeing someone filled with joy and happiness and watching you sing!

Great write-up, Linda. The Monkees did a lot of great stuff. I still play their albums. & though a lot of my faves were in your list, I'm shocked that they didn't do "Love is Only Sleeping"....
Rock on!

I don't want to spoil the whole aura for you, but email me if you want to hear something nitty and gritty about the Monkees.

I'm so glad to hear they did The Door Into Summer. I'm excited to see them in Long Beach, CA and see them do that tune. I saw them in November and they didn't do that one. Thanks for your writeup. It was fun to read.

You'll hate me when I tell you that last year or the year before (can't remember now) I had free tickets for their show here in Columbus....and I didn't go. As much as I love my Davey and the Monkees, I didn't feel like dealing with the crowds that night. Unfortunately Davey died not long after and I was very regretful that I didn't go.

Glad you had so much fun! It looks amazing!

Every time I watch this I get all teary eyed! We will have them play this video after our hot air balloon ride! I love seeing you enjoying life so much!!!