"It's the most wonderful time of the year..."

Yep, today was the first day of school for this kids out here in Las Vegas.  Freaky how time flies.  If I still lived back East, I'd be bumming about summer coming to an end. Right after Labor Day, the depression would set in and I'd start my "I can't stand the goddamn cold" rant even though the really cold weather wouldn't set in for another couple of months.

My most enjoyable fall ever was in 2010, the year I spent the summer in Albany. I could enjoy the beautiful fall colors because I knew I'd be coming back to Vegas by early November.  My sister Stacie was just up in the Adirondacks last weekend, and posted this picture on Facebook: 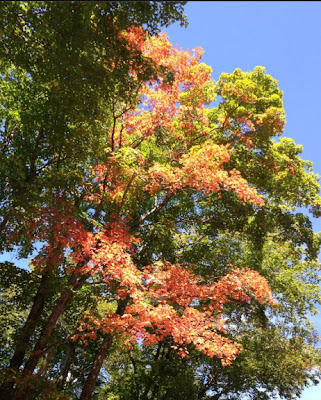 Seems a little early, but I'm kind of psyched because I'm heading back to Albany next weekend and maybe I'll get to see some foliage while I'm there.  I'll be in town for a week, and I'm planning on taking Courtney, Hazel, and Connor on some kind of trip--perhaps up north.  Any suggestions for a cool and inexpensive mid-week hotel?

Connor's first day of school is September 9.  Schools in the Northeast don't start until after Labor Day, and this year he's really getting a late start because the Jewish high holiday Rosh Hashana starts on Wednesday night, September 4, and lasts until Friday night.

Are you surprised to hear that the public schools back there get the Jewish holidays off?  Just Rosh Hashana and Yom Kippur.  Yep, there's a lot of Jewish people in Albany; I always had a million Jewish friends.  And to this day, I'm grateful that we sang "Oh, Hanukkah!" and "The Dreidel Song" at Christmastime and danced the Hora in gym class.  Along with the Alley Cat.  I bet they don't do that anymore.

When I was in elementary school, we didn't have the Jewish holidays off; I think that started when we were in junior high.  Anyway, I remember one day a Jewish holiday fell on a Wednesday and all the Jewish kids, of course, were out of school for the day.  Well, Wednesday was also the day when the Catholic kids left early for religious instruction at the nearby Catholic schools, so for the last hour of school there were only a handful of us Protestant or heathen kids left. Even the teacher was like, "Hmmm... this is weird."

Speaking of my elementary school days, here's a picture of my fourth grade class. Can you pick out your pal Linda Lou? 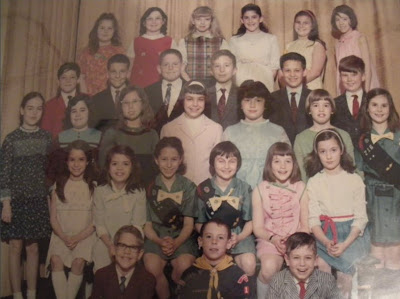 Yep, catching a little shut-eye at the exact moment of the click of the camera. I remember I was MORTIFIED when we got the packets with this picture.  Everyone was coming up to saying, "Look!  Your eyes are closed!" and I was like, "No duh..."  Oh, it took me years to get over that.

Funny, I still know the names of every single kid in that picture.  Of the 28 kids, 10 are Jewish.

Sadly, two of the kids in this photo have since died.  The God's honest truth is, one pushed me in the bushes walking home from school and the other wrote something mean in my yearbook.  Coincidence?  I'm not saying a word.  Maybe my eyes were closed because I was working on a curse.

No, a Girl Scout would never do that...

It looks like the girl on the far left in the row behind you also has her eyes closed (it's hard to tell on my monitor). Maybe you weren't the only one! Of course a Girl Scout would work on a curse. I think I got a badge for that!

Liz is too funny. I don't recall a "Curse" badge, but perhaps that's because I only managed to get through Brownies. REAL Girl Scouts eluded me.

Funny what mortified us as children. Oh, the humiliation!

btw - I think it's remarkable that you remember every kid's name. No way could I do that with my old classmates.