If you're my Facebook friend, you know I've been on the road again.  My grandson, Connor, flew into town a week ago Thursday, on July 25. The next day Mike and I took the kids to Sedona and the Grand Canyon.

Look how big Connor's gotten!  I think he's a little over 6 feet tall now, and he won't be 15 until December. 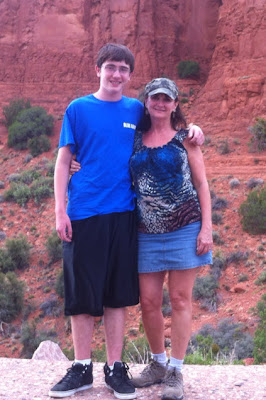 Sedona is certainly beautiful, but it pretty much looks the same every time.  Still, I feel like I have to take pictures like this one.  I swear, I have about 10 photos exactly like this taken over the years. If you've been to Sedona, I bet you have one, too.  This was taken from the overlook at the Airport Mesa next to the hotel where we always stay, Sky Ranch Lodge. 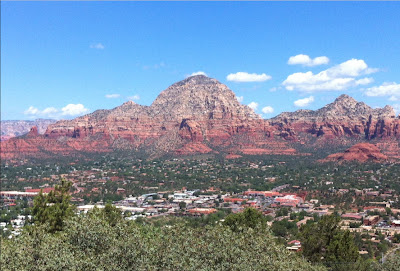 I've stayed there at least 10 times, but I think it's going downhill a bit.  The beds are crappy and the sheets kept pulling off the mattress. I told Mike I think that next time we should try someplace new.  Any suggestions?

Mike took this photo while we were hiking up Bell Rock.  I think I have another one almost exactly like this one, too.  Except I'm probably fatter now. 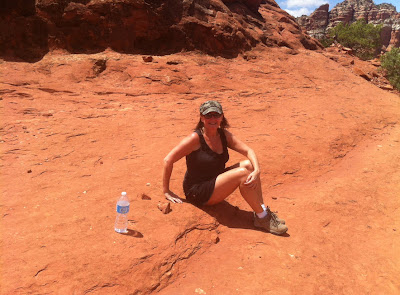 On the way home, we stopped at the Grand Canyon.  Here's another one of my boy. 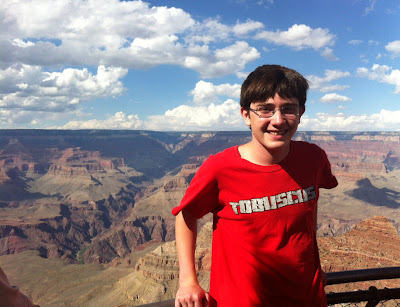 I posted this one on Facebook.  The background looks totally fake. 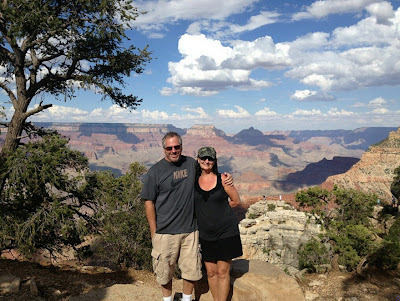 I don't know about you, but I think the Grand Canyon is...  yeah, it's the Grand Canyon and all, but... when it comes to scenic beauty, I think it's a little anticlimactic after you've been in Sedona.  What do you think?

Okay, so the day after we got home from our trip, Mom and Stepdaddy came to town.  Last Wednesday was Mom's 79th birthday, and guess what she had tickets for?

Yep, as luck would have it, Wheel of Fortune was taping in the Sands Expo Center next to the Venetian.  Mom got four tickets, so Connor and I went, too.  We saw two shows and they won't be televised until January 2 and 3 of next year, so everything was all "Happy New Year!"  Very fun.

Here's Mom at dinner before the taping.  She's looking pretty damn good for 79, don't you think?  We tease her that she's so well preserved because she got a lot of rest and never went outside during the agoraphobia years. 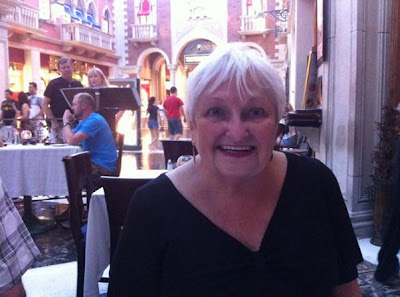 So Mom and Jim left Vegas on Friday, the same day Connor and I took off for Los Angeles.  It's tradition that when he comes to town, we take a trip with Mike and his kids, and then when the kids are at their mother's, Connor and I take another trip.  This year he wanted to go to L.A.

Holy crap, I am out of shape.  Hiking up to the Hollywood sign kicked my ass. 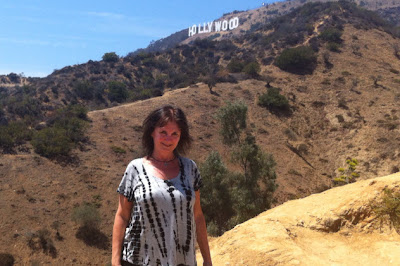 You can see my hair is darker.  Total mistake.  I took my coloring into my own hands and it came out way too dark.  It doesn't look too bad in this photo, but in real life, it looks like shiiiiiiiittt.  Having a few extra pounds and crappier hair than usual at the same time is seriously enough to make me mental.

Anyway, Connor and I had a great time driving around the Hollywood Hills and Beverly Hills and cruising Sunset Boulevard.  (Anyone will tell you I am a shitty driver, so you can imagine me driving in L.A. traffic, right?)  We also did the Paramount Studios tour, which was very good.  Totally worth the money.

Late Saturday afternoon, we were trying to decide what to do and I was like, "Hey, you want to drive down to the beach?" I was thinking either Venice Beach or Malibu, but at that point he'd probably had enough of my driving and so we just went to Starbucks on Sunset and the Ross store across the street, where I bought him a red tie he liked (!).

After that we headed back to Burbank, where we were staying.  A word about Burbank:  I love it!  There's no traffic and the downtown is cool as hell. I don't have the blood pressure for L.A. traffic, but I think I could totally live and work in Burbank.

Anyway, after dinner we went back to our room at the Portofino Inn (highly recommend--clean and great value), and I saw the news that some nut plowed into 12 people on the boardwalk on Venice Beach around 6:00 that night, killing one woman who was there on her honeymoon.  Absolutely tragic. Imagine if Connor had wanted to go to the beach?  We probably would have ended up there.

That happened right in front of the Cadillac Hotel, where my sister Lori and I stayed last June when we met up with our long-lost cousin. The guy parked on this street in the foreground, got out of the car and looked around a couple of times, and then plowed down the boardwalk. 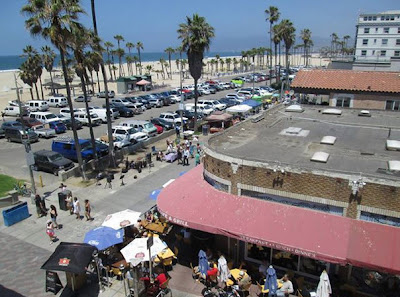 They say he did it intentionally.  WTF? to the tenth power.  I just can't imagine.

We left Burbank yesterday morning around 11:30 and made great time coming back to Vegas, until just past Barstow, where we got caught in traffic for 3 hours because of an accident on I-15.  But as luck would have it, even though we were out in the middle of nowhere, we had 3G access.  And Hulu Plus, so we had ourselves a little Family Guy marathon, right there in the Mojave Desert. 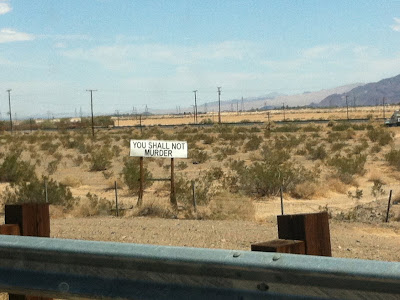 Connor loves comedy, and we took a little break in our marathon so I could share some joke writing techniques I learned in a recent comedy writing workshop I'd taken with Jerry Corley.  Then we watched some more, and I pointed out some of the techniques the Family Guy writers used.  We also used the techniques and wrote some material ourselves about Jewish bikers.  Because that's what grandmothers do.

you sure have been busy! Duh. You said that.

what are kids eating these days? They all seem to be giants.

thank goodness there's that sign in the desert admonishing all not to murder. I'll bet that foiled the evil murder plot you were cooking up.

my dream is to see a Wheel of Fortune taping. seriously.

at my restaurant job, i make them put the show on every night. and the bar crowd totally gets in to it.

was the taping everything i imagine it to be?

Hi Linda,
In Sedona I always stayed at the Kokopelli Inn. Reasonable price and close to "central" Sedona.