“Formerly” hot? Why not FOREVER hot?

Lately I’ve been reading this Formerly Hot blog, and I even have it linked at left on my Blogging Buddies list. The woman behind it, Stephanie Dolgoff, has fabulous—and I mean fabulous—writing credentials, but there’s something about this site that’s been getting under my skin. And when something gets under your skin, there’s no better time to make your feelings known than when you’re halfway through your second Young’s Chocolate Stout, right? Yeah, the other night I did the 2009 equivalent of the old “drink and dial” and left this comment on her post entitled “Still acceptably young.”

I hate the whole “formerly hot” concept. Why are you no longer hot? Why can’t you get better every year? I’m sick of the whole, “Weh… I’m 40.” Or 50. Or 60. Let’s quit overanalyzing age and start living! All that frettin’ is terribly unattractive. Definitely not hot.

Well, I got an email from Steph and we had quite a dialogue yesterday. I told her I know what she means about the universally accepted definition of hot as that “first-glance” type of attractiveness, as superficial as that is. But the “formerly hot” concept bugs me. If a woman turned heads and was considered hot when she was 20 and 30, I don’t understand why she wouldn’t continue to turn heads and continue to be hot at 40, 50, 60, and even 70. The only difference would be the age of the heads she’s turning; she’d still be hot to her own demographic*, right?

(*I’m not counting those woeful 50-year-olds who need a trophy chick three decades younger on their arm to make them feel virile or, God help us, the men who think Thailand is paradise because they have their choice of subservient, poverty-stricken young girls who would blow anything for a flicker of American hope. Let's leave them out of the picture.)

Steph and I agree that women shouldn’t feel like they have to be hot in the first place. I have friends who don’t wear a bit of makeup and they look perfectly fine; they care about their looks, they just don't have the vanity gene that some of us do. Women like me opt into “The Hot Game” and not all women care to play. That’s cool.

But I think if you choose to play The Hot Game when you’re over 40, you do have to keep yourself up. If a woman who used to be hot no longer attracts attention, she’s probably let herself go—she’s gained weight, walks around in sweats, doesn’t bother with lipstick or even a comb, or has a “Weh, I'm formerly hot” attitude that comes across in the way she carries herself. 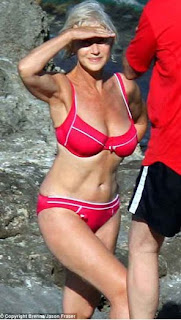 However, Steph thinks that the cultural definition of hot encompasses just a sliver of the population, and that’s where we don't agree. Think of all the marvelous role models we have these days--Helen Mirren (remember this pic from last summer???), Susan Sarandon, Goldie Hawn--they're all in their 60s. Need I mention Sophia Loren (almost 75) and Raquel Welch (70 next year)? I think we no longer live in an era where 50 is considered over the hill, and I'm afraid that, however well-intentioned, a website that talks about "girlstashes" and asks women to send in their “formerly hot” stories only serves to perpetuate the ageist culture that as a society, we've finally begun to shed. Maybe she's targeting the "Menopause: The Musical" crowd, but I never saw the appeal of that shit, either.

Personally, I would never dream of calling myself "formerly hot." Hell, no--I plan on being smokin' when I'm 90! Don't think I'm kidding. Being hot has nothing to do with age; it's all about attitude. And the first steps toward staying "forever hot" are (say it with me, kids):

What do you think? Would you ever refer to yourself as "formerly hot"? Or are you more the "FOREVER hot" type?

P.S. If you get a chance, check out this Living-Las-Vegas article I wrote last December. It's one of the most popular articles they've had on the site. “Are Middle-Aged Women Invisible? Not in Las Vegas.”

Amen sister!! At 47 I'm every bit as hot as I was at 20, except now I actually know how to be sexy and not just look it. I got asked to be an extra in a music video last Sunday. I opted just to interview everyone instead--my pole dancing skills, despite weekly classes are abysmal, but I was flattered that the producer and director thought I could hang with the young dancers on the set. I plan on wearing stilettos even if I'm pushing a walker.

I'm 55 and smoking hot. I get hotter every year. Every year besides the fact that I take care in my appearance, I'm more comfortable in my own skin and more assured in my beauty and sexuality and that's a very forever hot trait.

I totally agree with you. I am a vain free woman who wears no makeup and goes for comfort. I am fifty-four, happily married and still have men look. I am not the definition of hot, but like art, it is all in the perception.

Um, is "hoping to be hot before I die" an option? LOL

Hell I never had Helen Mirren's body when I was even remotely hot!!!!

Fine, I'm a Forever Hot too. (And not just because of hot flashes either!)

Love this post. I'd like to think I'm forever hot. I do remember my body in my 20's and want it back. What's stopping me? Oh that large piece of cake that I want or that cookie! HA

But I'll say I'm forever a hottie darn it. I wanna turn heads in that nursing home!

I agree with the concept of your own inner hotness. All of these older, gorgeous ladies you mentioned are totally smokin, but they've had the help of all that $$$ can buy. I've always been big busted and I can tell you, after breastfeeding 3 babies, the perk has pooped. I held up well until I hit about 52 and then I got these marionette lines at my mouth and my waist disappeared. Would I sell the farm to fix it all? You bet! BTY, the post with my 80's hair was from 1990 (same hair). I was 40 then. I never knew I was kinda cute. I should have appreciated myself more!

You are hot if you feel hot. It's all in your attitude...not necessarily your outside appearance. I intend to be hot even when I die. Remember, I'm opting for being stuffed so I definitely have to be hot to pull that one off!

Absolutely FOREVER HOT!!!! I don't see why any self-respecting woman would have it any other way.;-)

I'm 45 and I feel "hotter" now than I ever did in my 20's or 30's. Then I was under the mistaken impression that I was a "cow" so I wore all these large clothes to hide under, never wore anything with the purpose of attracting men (because they should be able to look beyond that!) and generally was just a miserable, lonely, lass. Rock on Linda Lou!

I would love to have the body I had in my 20s, but only with the knowledge that I have now as I creep ever closer to 40.
I'm putting myself in the forever hot box cause I'm not ever a chic your going to catch running around in sweats with no makeup! lol

I think a gorgeous women turn heads not so much because of her beauty but her attitute.

Hmmm, I'm not sure I ever was hot to begin with :-) But I totally agree with what you are saying.
xo

At 45 years old I may not be as perky as I was 25 years ago but I am definitely hotter. That's because I am hot to the core and not just on the surface.

Once a hottie, always a hottie, I say. I think you're right. No formerly about it. Just a different age of heads turning.

I am likewise a fan of Linda's writing and outlook (and for the first time am looking at her photo--the hotness is undeniable.)

I'm inviting you all to come on by and check out www.formerlyhot.com before you drop the subject altogether. I will be posting more about this, but in the meantime, give it a skim. My point is not that women are only hot when they are young. Please! Formerly Hot It's about when you start to realize you are not the woman you have been all your life, for any number of reasons--the way you look is just a part of it. The target reader is roughly my age--late 30s, early 40s.

If you give it a read, hopefully you'll see what I'm getting at.

For what it's worth, with the possible exception of Helen Mirren, "Helen Mirren (remember this pic from last summer???), Susan Sarandon, Goldie Hawn--they're all in their 60s. Need I mention Sophia Loren (almost 75) and Raquel Welch (70 next year)?"

All of the above have body parts and faces that are far, far younger than they are. The reason we think they're "hot" is that they look young.

What I'm questioning is young as the only way of thinking about hot. Much more subversive and actually not as easy as simply "keeping yourself up."

Which of course, I try to do as much as anyone--we all live in the same ageist world.

In any event, let's keep talking about this. The bottom line is that there are many ways to be "hot" and many more years to enjoy it. But that doesn't mean it's not annoying when you start growing a moustache...

I will be 50 in 105 days and will be even hotter then. Although I don't have the hot bod I used to have, as I get older I add other hot features that grab people's attention. I do stand up straight and smile at people, then I grab them with my eyes. If you polled the men, and women, I passed by yesterday, they would agree...forever hot. You've all seen my older sister and my 75 year old mother, it's in my genes!