Hold on. I have no idea what I’m talking about. I lifted that stuff off the Internet.

Despite the fact that I make a pretty good living as a technical writer, I’m not exactly into technology. In fact, a lot of the time I have no idea what I’m writing about at work, yet somehow I’m able to string a bunch of big words together in a way that makes sense to someone who cares about what they mean. I sure as hell don’t.

As far as consumer gadgets go, well, um… let me just say I drive a 13-year-old Saturn with a cassette deck. I do have an MP3 player in a drawer somewhere, but I don’t know how to use it, so an Ipod is pretty much out of the question. (Or are they the same things? I don’t know.)

A super techno-savvy friend of mine simply shakes his head at the sight of my televisions. Yeah, they’re both from the 90’s (like my car), but they work great (like my car), so why should I replace them? It’s not like I have to get up from the couch and walk all the way across the living room turn a knob to change the channel, like in the old days.

Though now that I write this, I’m remembering a TV we used to have when the kids were growing up. The knob was broken and for like two years we had to change the channel with pliers until the kids said it was too much of an embarrassment when their friends came over. Finally we gave in and got cable. And back then, it was nothing like the cable I have now, which came with a 125-page textbook of instructions. The only reason I read the damn thing was to make sure I could correctly record the daily episodes of my beloved Guiding Light.

No doubt as a result of their upbringing, my kids are anything but technology geeks. They’re both singer-songwriters, so they know how to hook up microphones and amps, but as you can see from the photo below, those are old-fashioned acoustic guitars they're playing. 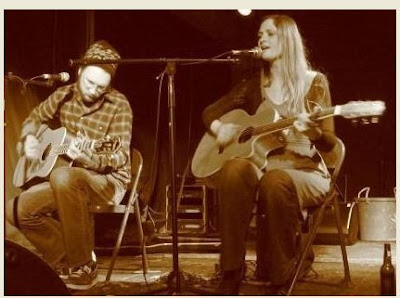 In all fairness, I should say they’re not completely back in the last century; Courtney did put up a MySpace page, and Christopher does have a couple of electric guitars, though he’s not at all into computers, which is shocking for someone his age (30). I think maybe Neil Young once said computers are bullshit and so he took his words to heart. Christopher just recently got an email account (which one of his neighbors set up for him), though he checks it only about once a month.

He’s not kidding. My favorite story is that Christopher and his now ex-girlfriend used to share a cell phone. Except they treated it like a land line--when they went out, they left it home. “When we’re not home, people can leave a message and we’ll call them back later,” they explained.

These days, however, Chris does have his own cell phone (but forget about text messaging) and he actually takes it with him when he goes out. Most of the time. 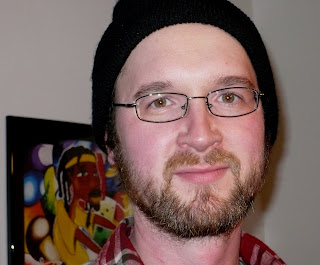 I took this picture of my boy when I was back in Albany over the holidays. Isn't he so damn cute? He's the nicest, sweetest person I know--such a gentle soul. I'm so proud of him; who cares about his technical acumen?

It’s okay that I talk about Christopher here. Though he'd probably be mortified, God knows he’ll never see it.

Aww that was the sweetest post. Truly. Strangely I am more savvy when it comes to technology than my daughter. She couldnt be bothered although has email and a phone. I so loved your line about your son using the mobile as a landline, he he. Personally I think they are the sensible ones!

When I saw the pic of your son I immediately thought what a lovely gentle look he has about him. We could do with more males in the world like him.

By the way I listened to your last radio show and thought it was great. I am hooked. So you have a listener as far as Australia now.

Awwwww....love this post. I need to listen to your radio show, though! If Lilly says it's great, she knows her business. LOL

Loving the whole cell phone as a land line. Honestly, I wish I could do that sometimes!

Nice looking son. You can see in his eyes he is a gentle soul!

You have a cassette player in your car? I love it!! I can easily teach you how to use an ipod. It's very simple I promise.

First time reader who found your site via Hurricane Mikey. I read just a few posts and i can see why he likes you - what a great read! I look forward to more - thanks for sharing!

@ Lilly: Thanks for listening to Aging Nymphs! My sister and I have a lot of fun with that; I just hope people can tell the difference in our voices. I know my ex listens in New Zealand, but you're even farther away!

@ Julie: You should call in sometime during the live broadcast--I know you'll have something fun to add!

@ Carmen: You can teach me the iPod stuff AFTER we get finished with all our girl talk! Can't wait to meet you!

@ Other Mikey: Welcome and thank you so much for checking out my blog. It's not really a Lifetime movie, is it? ha!

Linda, Linda, Linda.....you are such an advanced woman in so many ways, I guess you can't be in all ways. I LOVE techno gadgets and would die without my iPod.

Your son looks so much like you! What a great looking kid!

check this out....the word verification I have to type in for this comment is "mantrap" somehow that is fitting...not sure how.

Unfortunately I love technology and have to resist all techno temptations. I am old enough that everything new becomes old and that helps resist even the most interesting new gadget.

You must have had the same model black and white television as we did for I also recall having to use pliers to change the channel.

Last week I caved in and bought an LCD 40" television. I have to confess - it is FANTABULOUS. Especially with the speakers set up and I can watch two channels at once and blah blah blah.

Nice to see your kids into music. It is good for the soul.

@ Jamie: Thank you for checking out my blog!

@ Linda: I can only imagine how awesome 40" of Guiding Light and Kath and Kim would look!