Still no progress toward politically correct

Is it okay to generalize about a minority if you’re saying something good? I know you’re not supposed to slam an entire race of people, but if I'm spouting off positive stuff, then hell—shouldn’t the group in question simply take the compliment?

Whatever, I’ll just come out and say it: I love Jews. I do! When I lived in Wyoming and Utah, I swear, I met people who had never seen a Jewish person in real life. I was like, damn--you don’t know what you’re missing! They’re smart, they’re funny… what’s not to love? I’m generalizing, I know, but it’s true!

We had only one Jewish family in our neighborhood on Lincoln Avenue, where I grew up in Albany, but because I was in the “academically talented” classes in school, I had tons of Jewish friends. In eighth grade I became best friends with Joan Freedman—she was awesome! Joan had a medical excuse to get out of gym from a doctor whom her parents knew on a first-name basis. That right there gave me my first case of Jewish envy, which continues to recur every Christmastime.

Several months ago, I started to write a blog about the celebrities I wish I had as friends. Now, I’m talking friends here; don’t get this confused with my celebrity girl-crushes. (And we know who’s at the top of that list, don’t we, Beverly D’Angelo?) No, these are the top three women—who, of all the celebrities on earth—I would most want to be friends with. And guess what? They all happen to be Jewish. 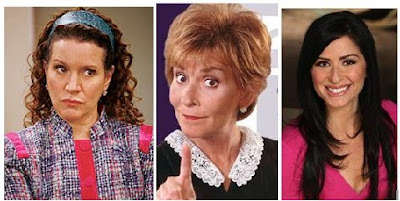 The first one is Susie Essman, who plays the most foul-mouthed character in television history on Larry David’s show, Curb Your Enthusiasm. Watch this You Tube video and tell me you don’t want to party with her.

Then there’s Judge Judy. Anyone who writes a book entitled Don’t Pee On My Leg and Tell Me It’s Raining is alright with me. See, that’s why I love Jewish women--there’s no bullshit with them; you never have to wonder where they’re coming from. If Judge Judy were president, or even first lady, this country would not be in the mess it is now, I guarantee.

You may not know my third fantasy friend. That’s Teresa Strasser, from the Adam Carolla radio show. The show was cancelled a couple of weeks ago as a result of corporate cutbacks, and now the economy has officially pissed me right off. You can still hear Adam on his free daily podcasts, but still, it’s not the same.

Anyway, Teresa’s a young girl—younger than my kids even—and she’s a super talented writer. And I bet you anything she’s a sweet person in real life. Probably because she had a black stepfather; you don’t see the Jewish/black combination very often, so you know she must be special.

Anyway, Teresa and I are MySpace friends, and a while back on one dateless Friday night after a few beers, I sent her an email saying we could totally be BFFs. (I think that was the same night I wrote to Oprah.) For some reason I also mentioned my unhealthy infatuation with Denis Leary—you know those alcohol-induced confessions—and Teresa graciously wrote back and said, yeah, she could totally do Denis Leary, too.

OMG - I just watched the video clip. Too fucking hilarious! I'm now the newest fan of Curb Your Enthusiasm.

And, as one of your fabulous virtual Jewish friends and former certified JAP, I love being put up on a pedestal. Even if it's simply for being born into a religion I care nothing about. History is history - I'll always have that.

And yes, comparatively speaking, Jewish people are WAY funnier than the rest of society. Maybe it's because we've had to dodge everyone and their Uncle Jimmy trying to kill us off for thousands of years. Maybe it's because our idiot ancestors had to keep kosher. Maybe it's because we have bigger noses, I just don't know. All I know is we're funnier. And better looking. After all, who doesn't have a girl-crush on at least one of these babe-a-licious members of the tribe: Sarah Silverman, Natalie Portman, Scarlett Johanson, Alicia Silverstone, Amanda Peet, Kate Hudson, Sarah Michelle Gellar, Amanda Bynes, Debra Messing. I rest my case.

And, btw - I'd do Denis Leary in a heartbeat. Something about that crazy strawberry blonde hunk of man that makes me want to do things that can't possibly be legal.;-)

Yes, Natalie Portman--beautiful! Somebody once told me I look like I could be her mother. Um, that's a compliment, right? I took it that way.

Agree with it all. Plus, the men are circumsised. Very attractive status.

Oh, God help me, I hope I never have to see one UNcircumcised! They're not the best looking things even when they're trimmed.

Ok. I loved this blog and cracked up watching the video!! But really ladies, did we have to start the circumcision discussion?!

My favorite Jew is Barbara Streisand.

I totally girl crushed her for years.

What about Janeane Garofalo?

Write On, Right On!

For the record, Janeane Garofalo (who I totally adore) is of Italian and Irish descent and is an atheist. Unfortunately, we can't count her as a member of The Tribe.

When I met my second husband, who is from the northwest, back in '93,
he admitted he knew no Italians. I can't imagine not having my Italian friends! And Jews...they're the best! I, too was fortunate to go to a grade school with lots of Jewish kids. Their parents make sure they got a good education and I did,too. Also, my family almost always had a Jewish guest at our Christmas and Easter dinners.
What a great life I've had. I'm so lucky.