Man, I so did not see this coming.

I got into Albany around midnight Tuesday night, figuring we'd drive down to Pennsylvania the next day for the wake. My sister Lori picked me up at the airport and said that as it turns out, the wake won't be until Friday and the funeral will be Saturday morning. And she had plans for us for Wednesday.

Seems like biker chick sister had twisted our BFF Donna's arm to skip out on a half day at work and so yesterday afternoon the three of us headed up to Lake George, a resort town up in the Adirondack Mountains about an hour north of Albany, for Americade, an annual week-long biker event. We had originally planned to go on Saturday, but the change in schedule actually worked out since it wasn't nearly as crowded. Normally Lori would have ridden her Harley up, but since there were three of us, we took "the cage." (That's biker talk for "car.") (Aren't I queer?)

We met up with our good friend Mike at DJ's, a bar on the main drag. Is he one hunk of testosterone or what? Too bad none of us really like him. 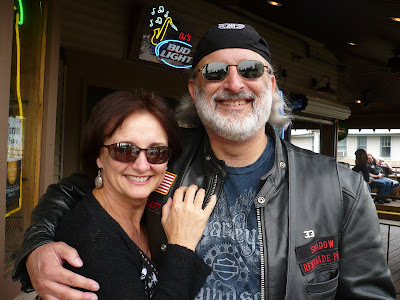 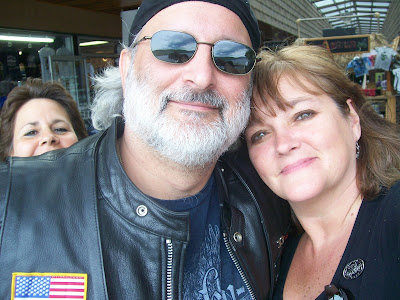 Mike's headgear reminded me to tell them about the time I wore a kerchief like that to Walgreen's and the lady behind the counter asked if I was a breast cancer survivor. Soooo not the look I was going for! It's a good story, though, and I love making people shoot beer out their noses.

After a while we walked around a bit and did some shopping. Of course, I couldn't pass up a placed called Shakedown Street--you know I love my hippie garb. I picked up a really cute bag (as if I need another one). I hadn't been up to Lake George since I moved out west in 2001 and I'd forgotten what a cute little, picturesque town it is. 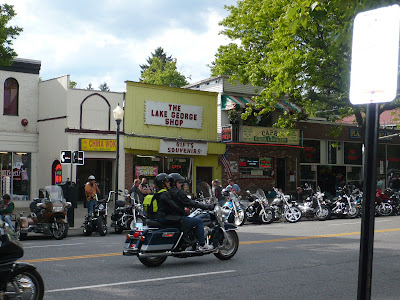 And of course, the people-watching was fantastic. Check out guy and his dog. 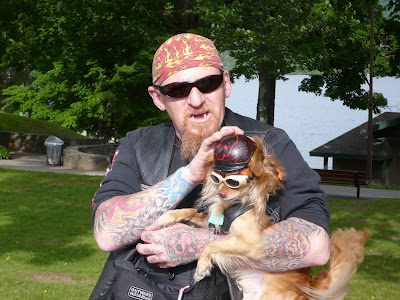 There's something extremely gay about that, but I wasn't going to be the one to tell him.

At one point we passed a temporary tattoo vendor (God knows I could never commit to a real one) and Lori and I were all set to get matching "BAJ" tattoos on our arms, but they didn't carry letters, only images, so that idea was shot.

Lori and Mike's friends were staying at a motel on the lake, and after a nice Mexican dinner we stopped by to say hello. This character, who for some reason is known as "Mark No Pants" reminded me of my old boyfriend Tim, and when I asked him if he was Irish, this is the answer I got. 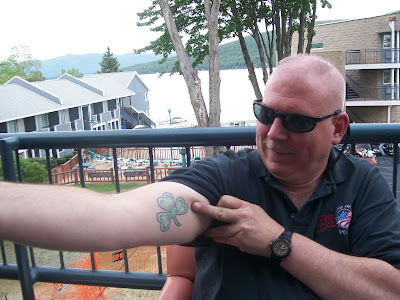 After a while we headed back to DJ's, where I struck up a conversation with a swell guy from Buffalo. I don't know how we got on the subject, but he confirmed what I've suspected all along: age doesn't really matter to men, and they actually prefer women around their own age. The key, however, is that we have to keep ourselves up, which is easy for a super-vain gal like me. Makes sense, don't you think?

Anyway, the day turned out completely different from what I had envisioned, and it was a great diversion from the grief that had consumed us in the previous days. You never know where life will lead, and as I've said a million times, the universe unfolds in divine order. 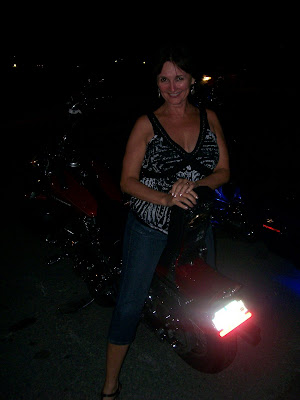 Very nice Linda. It's nice to see your smile. Even in your writing.

Ditto what Mikey said - there was a definite warmth and glow about your post today. I believe we honor the dead when when find joy in life - surely that is how BAJ would have wanted you gals to spend your day.
That is a beautiful shot of you at the end of the post, did you find it hard to drive that way?

Well, I've just caught up on your posts for the last week, and I'm so sorry to hear about your Beautiful Aunt Joyce. It's especially fitting that the people BAJ loved in life are able to gather together in her honor. I am thinking she is smiling right now and rejoicing at your "aliveness". It's all very sad and yet uplifting somehow, isn't it?

OMG, I just spit Diet Pepsi out my nose on that story of you and the doo rag on your head.

Glad to see you had some good times. I think maybe BAJ knew you'd need it...

Did you get me a new bag too?