I’m happy to see that, judging from the comments you left on my last post, I’m not the only one who prefers not to start a vacation with an escalated blood pressure reading. Yes, allowing a cushion of time when leaving for the airport is definitely a good idea. And a relationship saver.

Just like their perfect wedding (planned in just one week’s time), their celebration party was done on a shoestring budget. Courtney and her fairy godmother, my dear friend Susan, went shopping at the dollar store and picked up all sorts of cool decorations and paper products. 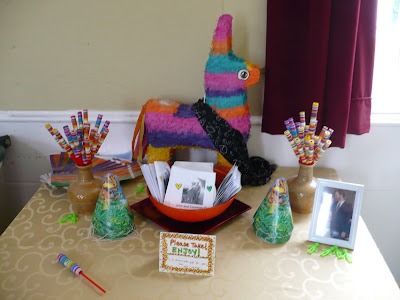 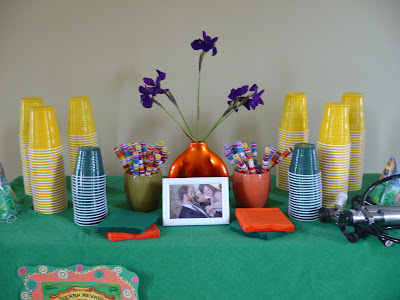 Yeah, that's the tap for the beer keg on the right. Notice how everything matches the color scheme of the Sierra Nevada Pale Ale label? No coincidence.

The party was held in Conkling Hall in Rensselaerville, NY--the same place where John's parents had their wedding reception over 40 years ago. This is how it looked before all hell broke loose. 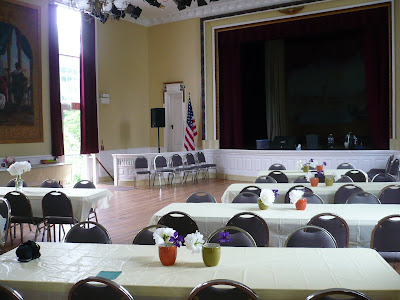 The tablecloths and vases are, of course, from the dollar store. Florist? Forget it--Courtney picked the flowers that morning. 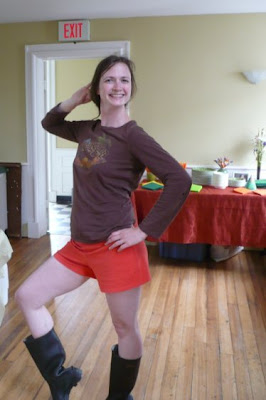 But Courtney walks with the angels, as we always say, and she did shower and make it back by 2:00 as planned, looking gorgeous as ever. 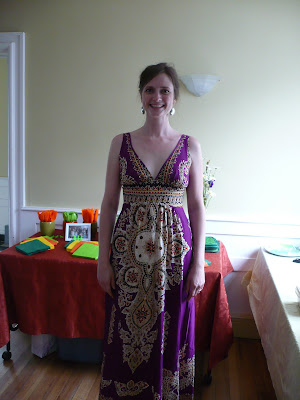 Court got this dress from Macy's and she really likes it, so unlike her wedding dress from the Deb Shoppe, I don't think she'll be returning it. I told you about that, remember?

Soon the guests started filing in. Here's a funny picture of my son, Christopher, with my ex-mother-in-law, Virginia. 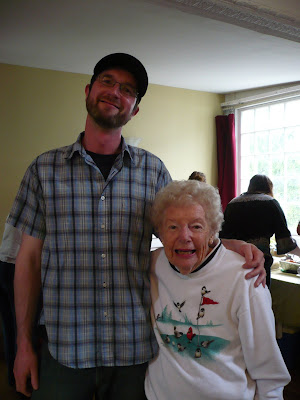 Yeah, they're both standing. Don't they look like something out of the Guinness Book of World Records? (Mmmmm... Guinness.) Christopher is the sweetest person on earth, and I'm not just saying that because I'm his mother.

Here's Courtney and her two grandmothers. That's my mother on the right. 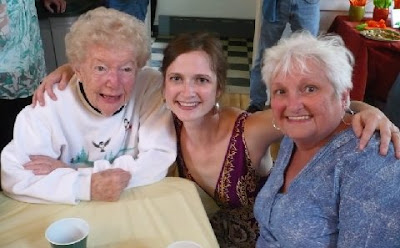 Wow... who's this good looking couple? 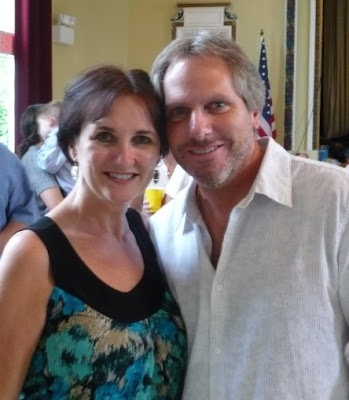 I was happy that all my family and friends got to meet beloved boyfriend, and I was especially happy that he didn't run like hell when Courtney called him "Stepdad." That's a good sign, though--she won't be peeing in his shampoo. 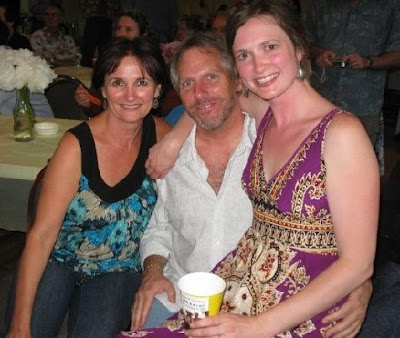 Everyone brought a dish for the buffet--no need for a caterer when you have lots of friends willing to do the cooking for you, right? And no need to hire a band, either, when half the people there are musicians. After everyone ate, the jam session began. 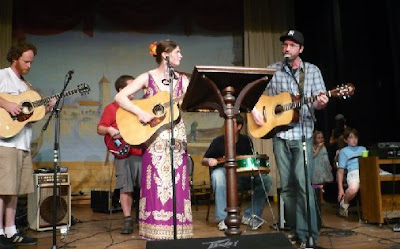 That's John, Courtney, and Christopher on guitars; my grandson, Connor, is the lighting technician. There is nothing that makes me happier than watching my kids play together. They each write their own songs, but weave in a cover tune now and then. My eyes watered up when my little Joni Mitchell sang "You Are My Sunshine"--if you read this post, you'll know why.

The music was fabulous and went on for hours as one musician after another went up to jam. One of the highlights was toward the end when the stage was filled with these talented young folks playing the best version of "I Shall Be Released" I've ever heard. Reminded me of the final song in The Last Waltz. 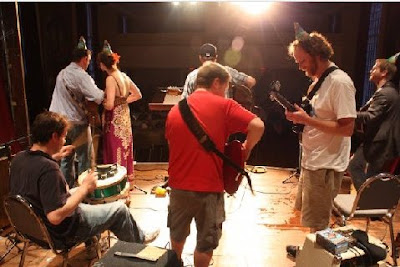 Everything was perfect and everyone had a great time. I shake my head when I think of how much money people spend these days on weddings. Who needs fancy matchbooks when you can give out homemade beer and CDs as party favors? 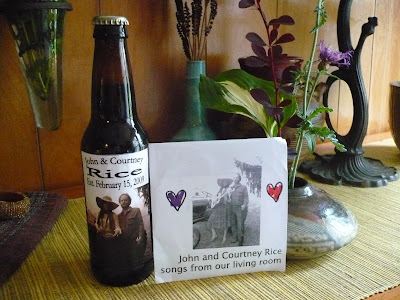 Nope, nothing could make me happier.

Do you know Ellen?

Do you ever come to Raleigh to perform at 'Charlie Goodnights'?

I wasn't "afraid" to ask these questions, and I feel proud of myself.

Blase! Thanks for being brave enough to comment. (See, lurkers? It doesn't hurt!)

Um, I know a few Ellen's, but if you mean Ellen DeGeneress, then no, I don't know her personally. She did steal one of my jokes, though. (Not really--it was a common observation.) I haven't been to Raleigh in years, but next time I'll definitely check out Charlie Goodnights. Name sounds like a guy I once dated.

That looked like fun. Your family is gorgeous, and your gorgeous boyfriend looks like he fits right in. I love the pictures. Congrats, Mama!

Aw I'm glad you had a fun time!
It's so nice to be able to spend some time with family.

The picture of you and your boyfriend is absolutely adorable, by the way!

Sorry I missed it! The dinosaur thing was fun, though - the kids loved it. I'm glad you all had a good time. Hopefully I'll get to meet you on your next visit! :-)

I'm so glad you had such a great time. You and MM look fabulous!!! Now if I can just get you two to weekend in Ohio sometime.....

This truly does look like one of those perfect days! One of the weddings everyone will remember and talk about for years to come. A true celebration of love. Thanks for letting us have a peek!

This is awesome. I love that it's not traditional. Thanks for sharing.

It looks like good times were had all around. Everyone seems so joyful. Your daughter and her friends seem like free spirits, I bet that it makes for a lot of good times.

Gosh, I actually have tears in my eyes. What a sap I am!

When Babygirl1 got married a few years ago, I didn't want the day to end. It was a most fabulous day!

Wow - what a great party. Everything looked beautiful (and to have spent little money makes it even prettier!) and having a room full of musicians like that - I'll bet you wanted it to last forever. Seems like the perfect cap to their wedding.
Love the pictures - you all look very happy! And the title of their CD is fantastic.