Another rated R for language, but tell me if you don't agree

As I said yesterday they didn’t accept my offer on the condo, and boy, am I pissed. Screeching halt! You and I both know my heart is not into buying any kind of property right now, so WTF, Linda, right?

Well, I’ll tell you. The reason I didn’t get the condo is because condos are being snatched up here in Las Vegas by investors who are paying for them with cash. So whose offer is going to be accepted—the buyer who can pay with cash or the buyer who has to go through the whole mortgage process, possibly FHA and all their requirements? (And P.S., my offer was submitted with a pre-qual letter for almost twice the asking price.)

That, people, is what’s pissing me off. What if I really, really wanted that condo? What if having a piece of the American dream and “pride of ownership” were actually important to me? What if (gulp) I’d been foregoing my expensive dark beer for the cheap stuff for months on end—saving every cent toward a down payment—for nothing?

You know I hardly ever talk about politics or current events in this blog, but economically this country is messed up, and Las Vegas is at the high end of the scale.

This condo project here in Green Valley went belly up a few years ago. How long do we have to look at this thing, and at some point won’t the elements deteriorate it to the point of no return? It's an eyesore, a huge one. 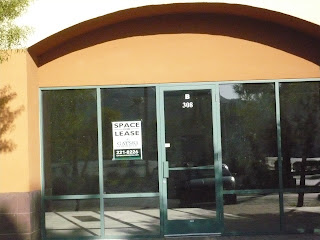 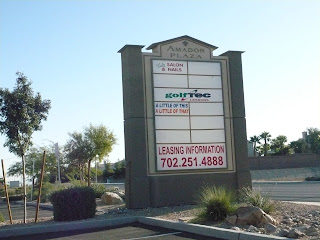 And then there are signs of another type:

Murder-suicides here are at a record high… The woman who owned the franchise of the coffee house where I wrote most of my book went bankrupt… My work friends and I used to go to the lunch buffet at the Silverton casino. No more—the buffet’s open only for dinner and brunch on the weekend… The bartender at the PT’s pub across the street from my office says the owner’s pressuring her to bring in business. From where? The nearby businesses don't employ the number of people they used to.

A woman approached me after the author’s panel last week and asked if my book was in library. She said she really wanted to read it, but she’s unemployed and can’t afford it right now and after she walked away I realized I should have just given her a copy. I'm KICKING myself for not.

The unemployment rate is almost 14 percent in Las Vegas. The company my friend’s father works for imposed mandatory overtime with no pay—take it or leave it, folks. Those fucking bastards. They know people are scared shitless of losing their jobs, but I can guarantee you the owners of the company haven’t cut back on their lifestyle one goddamn bit. They’re probably out there snatching up condos.

The rich get richer and the hardworking people in the middle are fucked.

And don’t even get me going on the banks and credit cards. Those mother fucking assholes are raising people’s interest rates to obscene levels, making it nearly impossible to pay off, and they're reducing credit limits (which impacts consumers’ credit scores) for no good reason. Pay your bills every month on time? They don’t give a shit—you’re fucked.

Another friend of mine, who filed for bankruptcy a while back, is now getting credit card offers to help “rebuild” her credit. The interest rate on purchases is 31 percent, and if you check out the tiny print on the back, you'll see there's no grace period for purchases made. That means the second the transaction goes through, they start collecting interest. At 31 percent. Oh, there’s also a $100 application fee, which is immediately charged to the account, so they’re getting that 31 percent right off the bat. And oh, yeah—there’s a $75 annual fee. I’m sure those are terms and conditions people recovering from bankruptcy don’t mind at all. Preditors! Fucking preditors.

The banks and credit card companies are RAPING consumers and on top of that, they expect the country to bail them out. To them, I offer my three little special occasion words, words I haven't spoken since my rant about cancer:

I just got out of one of those horrid job situations with mandatory OT, no extra pay..etc.

Also was notified that he 2 credit cards I have both decreased my limit. I don't owe on either one. Bastards.

Damn!! I really hope things get better mid next year for our move as right now it sounds pants in LV!

SOOOOOO depressing. Its a lot like that down here too, empty shopping centers, cuts in pay, major lay-offs. I've been unmemployed for 6 months and would be in the street by now if it weren't for my family helping me out (which kills my ego but I appreciate it immensely). It does suck. Big time. Its all about the money. Don't EVEN get me started on the so called 'war on drugs" in this country or I will blow a gasket for sure.

Linda, the economy has been in the toilet for a long time. Vegas has been hard hit. Around the country we feel your pain. This is the worst it has been for me since 1980. Sometimes it takes an outside force to make things change for the better.
Wish you all the best.

I wish I could say that things should get better soon - but it seems like they just keep getting worse! I had a credit card for years and years with a fixed APR of 5.99 - got my letter informing me it was going to variable 11.99! I have never had a late payment & they wouldn't budge. The customer service employee said employees weren't even exempt. Closed that account - they could have made a bundle on my impulse buying and trips to Vegas! Their loss.

Okay, enough beating around the bush. Now tell me what you REALLY think.

OH Linda!!
I am sooooo with you on this subject(s)...WTF is going on? I've been reading you for several months now...got here via Hurricane Mikey (I am addicted to all things Vegas, but live just outside Chicago - so I have to get my fix vicariously!)
Let me tell you what's been going on in my house for the past few years, hubby unemployed 20 months out of the past 36, oldest daughter, SIL & 4 yo grandson move back home 'cuz he worked for Circuit City and they went bankrupt,(daughter just got a clean bill of health after fighting uterine cancer for 4 months! Thank God!) middle daughter, 3 yo grandson, 3 month old granddaughter move back home 'cuz of a divorce and the bastard has paid her $95 in child support since Feb. The company I worked for made us work 6 days a week for no extra pay (I was a Mgr on salary -never got a raise or review after 2 years -cancelled bonuses with no notice and treated us like crap!) Been jerking around with my mortgage co for MONTHS, finally was able to get a modification, middle daughter's car got repo'd...and the list goes on and on...and then there's my 22 yo son with the learning disablity who works, but God knows when he's going to be able to move out..we have 6 adults and 3 kids at my house! There are some days when I just want to beat my head against a wall 'till I knock myself out, 'cuz maybe it will be all better when I wake up. But for now, we've circled the wagons, and we all just do the best we can! On the credit card front...oldest daughter (who is filing for bankruptcy) got an offer in the mail...would you believe an interest rate of 79.9%??????!!!! Unfreakin believable! How many cc co's are doing this kind of thing?
Sorry...didn't mean to write a book...just wanted to let you know I "get" you!! Keep the apt!!

OMG, Tracy, how do you do it? I don't know what to say other than I hope this situation improves for you, and SOON!

@ OHN: I had one credit card decrease my limit this week and another increase my interest rate.

The weird thing is, my personal situation always seems to be the opposite of the country as a whole. I was literally penniless after my divorce, at a time when everything was booming. Now things are pretty good for me and we're collectively going through the toughest times I can remember since inflation went out of control in the late 70s.

I think this is worse, though. I don't remember hearing of murder-suicides back then.

I agree 100 % with your post. I can attest to the fact that murder/suicide rates are up...in fact all crime is up. I work in law enforcement so it is job security for me...but it is so damn depressing it takes its toll.

It about the same here in Atlanta. Middle class struggling while the rich get richer.

Wander to the Wayside said...

This is my first time here - woo hoo, what a welcome! You described our life of the last five years perfectly: "the hardworking people in the middle are fucked." You haven't even met met me, and you already know all about me - everything you spoke of has affected us, including bankruptcy, unemployment, and no insurance! Great post, and I'll be back later to read more, both past and future.

Well said Linda. What sucks is, when I inquired about refinancing my house to lower my payment, nobody would do anything to help me, but I'll tell ya what, skip paying your mortgage for a couple of months, they're all over getting ya back on track....Idiots..

Welcome, Wayside Girl! Hope to hear more from you.

Tara, no shit. Banks and credit card companies will help people only after they've fallen behind and have wrecked their credit score. But for those who try to keep everything above water--nothing. Bastards!

Don't even get me started on this topic. Your 3 words are so fitting!

Linda,
I work 2 jobs. 1 full time, 1 part time. My husband is employed full time. Why do i work so much? Well he is a machinist and gets laid off frequently. So the part time job income gets stashed away so I can pay for my house and bills. Does it make sense?? Hell No!! The middle class citizen has a huge hole from all the ass raping going on. It's ridiculous!!