First, thank you all so much for entering the “Win a Copy of Bastard Husband: A Love Story” contest. It’s nice to see such an interesting cross-section of readers, and I cannot begin to tell you how much I appreciate your enthusiasm for this little book of mine. Well, at 260 pages, it’s not that little. (I know—can you imagine reading 260 pages of my voice???)

And the lucky winner is.... Hoopswife, age 40 from Ohio. Congratulations, Hoopswife! Please send your mailing address to Linda@VegasLindaLou.com and I’ll get that book out to you the minute it comes in. I talked to the printer on Tuesday and he assured me I’ll have books in hand by the end of next week. I'll be taking orders from this site very soon--I'm thinking by Saturday. Oh, I hope you like it!

I got an email from beloved BH in New Zealand yesterday; I said him I'd send him a book and he wrote back saying if I send him three, he'll sign two and mail them back to me. So there'll be another giveaway down the line. Just imagine how valuable a book signed by Bastard Husband himself could fetch you on eBay!

I'm just being an a-hole. As always.

So last night I was on my way to an event at the library— Screeching halt!!! Oh, for Christsake, can you believe I live in Las Vegas and I start a sentence like that? WTH? (That’s the rated PG version of WTF.) Anyway, I was walking through the library and my daughter, Courtney, called to say doesn’t Courteney Cox look like hell? (Yes, she calls just to tell me important stuff like that.)

“She looks plastic or something,” the Kim to my Kath said.

Court had just watched Cougar Town on the east coast and I when I got home from my very. exciting. event. I tuned in. I kind of thought it sucked last week, but sometimes shows take a while to kick in, which I’m hoping is the case with Family Guy’s spinoff, Cleveland, which debuted last Sunday night. Yes, I watch cartoons at age 52 on Saturday.

Anyway, I think Courteney Cox is beautiful, but she is too goddamn skinny and it shows in her looks. I wish to God I could remember which actress said that after a certain age, a woman has to choose between her ass and her face because they’re simply not going to both look good at the same time. I’ve told you before, I’m choosing my face and I’ll make that clear to any guy who’s interested in me, including the two who asked me out last week. (Yes, they were younger, but no, I’m still not a cougar.) (And oh, yeah. I never heard from Mike about my retainer idea.)

Anyway, they have C.C. wearing a million little outfits on the show and all I could think was how goddamn sick I am of these size 0 actresses who look like they’ve been vacationing at an internment camp. Courteney Cox is 45 years old—she needs a little meat on her. It’s a sitcom, not a CARE commercial. Who in Hollywood do I need to smack some sense into? And any guy will tell you that the bag-of-bones look is so not sexy.

Now, back to my Courtney. Look at this picture she sent me the other day. She said I could post it as long I tell you that she’s not wearing any make-up. Can you believe she’s only 3 months pregnant? 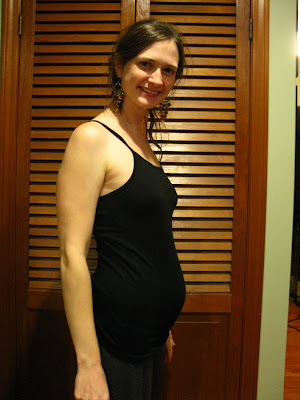 I was like, what are you, Octomom 2? Don't worry--yesterday’s ultrasound showed only one baby in there. So exciting…

I’ll tell you what else is exciting—I’m heading up to Boise tomorrow to see Mom minus her gall bladder and Stepdaddy. Mom’s already said she’ll make me a cake and I’m holding her to it, post-op or not. Maybe we’ll even get to go to the movie theater with the microbrews. Yup, life is good.

Aww, look at your girl, all cute and pregnant! We all carry babies differently though. Some of us are definately luckier than others in the showing and weight gain department...

I'll say what I say to all the skinny girls for Courtney Cox, EAT A PORKCHOP or 5......

Hope you get your cake!!

I call my mom and tell her random things like that too!
Aw I can't believe she's three months pregnant -- seems like just yesterday you told us the news. How exciting :)

Have a fun weekend!!
And I can't wait to order yo new book!

P.S. Thanks for the thoughtful comments! So sweet!

Good Lord, she looks like you. Well, except for the tummy! That's three months, eh? So she's having a toddler, not a baby. Sweet. LOL

Have a great time with your Mama.

Well, the gut kind of looks like mine after a few Guinnesses.

I agree that Courtney Cox is way too thin. You daughter on the other hand even without makeup is stunning.

I think that quote about the face or body was from Coco Chanel.

Courtney Cox needs a tan and a sammich.

And Linda Lou needs to have a happy birthday this weekend. Beer's on me when you get back!

I won't watch the Courtney Cox show because it's unrealistic. What is realistic is this month's Glamour Magazine with a tribute to "real women, real sizes." Everyone needs to support the magazine by buying the issue and tell the world we want more!

So you're getting your cake now, hmmmn, that's yummy! What a nice mom you have.

Imagine my surprise, Ive been out of town and catching upon my important daily rotations I have missed for severl days and Winner winner chicken dinner!
Im so excited for the book.
Many Thanks !! I'll email you my mailing address. Really, this made my day!!