LUT: Some fun music and a video

You know I think my son-in-law, John Rice, is the ultimate—I couldn't hand pick anyone as a better mate for my daughter. In addition to making my Courtney the happiest girl on earth, John is a fantastic musician. 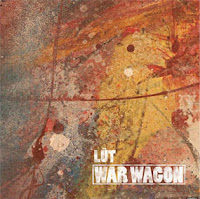 Besides playing in the Red Haired Strangers, I just found out he’s been working on something for years and it’s a lot of fun. LUT (pronounced loot) is a tongue-in-cheek project in the vein of bands like Ween, Flight of the Concords, and Tenacious D. Check out these lyrics to one of my favorite songs, “Woman Driver,” on their latest CD, War Wagon.


It’s gotta be a woman,
Gotta be a woman driver
She’s playing with my life on the left-hand side
Oh, woman
She’s on the cell phone
Since 50 miles ago
I seen her nearly back-end a truck and I said what the…
Heck are you thinking?
Ain’t like it used to be
In this land of the free
A man needs a wife on his right-hand side
Not in the driver’s seat

The three band members perform under assumed names (John is “Lars Bumgratenschlef”) and what’s interesting is the guys haven't played together in the same room since 1996 when they were all living in California. Since then they’ve made five CDs worth of material by sending tracks back and forth across the country, at first by mail and now through the Internet. They even put together this music video via remote technology (starring "Lars" himself).

If I have one criticism, it’s that the music behind the kooky lyrics is so damn good, it’s hard to remember the CD is kind of a spoof. They’re planning to enter the CMJ and SXSW music festivals—both great places where bands can break out. Hopefully their novel recording technique will help to set them further apart from the sea of crap-rock that's out there. They’re also looking into ways to market to music supervisors who do movies, etc. Keep your fingers crossed for LUT!

Got some extra time at work today? Check out LUT’s website at www.stinkpants.com. Stinkpants? But of course.