Remember I told you I got this new phone? It’s a T-Mobile HTC and even though I’ve had it a month now, I still have no friggin’ idea how it really works. I just touch stuff, swear a little, and hope for the best. My apologies if I’ve accidentally called you lately; hopefully that nonsense will end within the next year or two when I finally get the hang of the thing. Of course, then it will be time to buy a new phone. Let me say once more that my blood pressure would be a lot lower if the goddamn thing came with a user’s manual.

As you can tell, I’m not the most patient person on earth. I’ve said many times that I have all the patience in the world for people, but I could take a hammer to a machine that doesn’t do what I want it to.

Um, I have to revise that statement. Evidently I have no patience whatsoever, for machine or mankind.

Yesterday I took my grandson, Connor, to see The Karate Kid after school. Because I’m neurotic about being late, we were the first ones in the movie theater. Armed with popcorn and a giant-sized icy sugary concoction that only a loving granny would be crazy enough to buy, we settled into the best seats in the house.

People started filing in during the advertisements theater owners think it’s okay to show even when they charge freakin’ $18.25 for two matinee tickets. Surprisingly, Connor was the only kid in there. As luck would have it, the young couple in the row right in back of us TALKED REAL LOUD during the ads, which bugged the shit out of me, but like the freakin’ saint that I am I gave them the benefit of the doubt, figuring they’d pipe down once the previews came on. 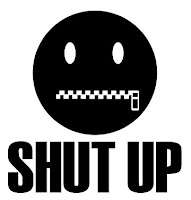 But no. They carried on their stupid friggin’ conversation all during the five or so coming attractions, in total oblivion to the occasional glare I sent their way. Surely they won't keep this up during the feature presentation, right?

Wrong. The movie started and they were still blabbering away.

At that point I. am. heated. Why the hell do people think they can talk out loud in a public movie theatre as if they’re alone in the privacy of their living room? Huh?

So about five minutes into it, I stood up, turned around and pointed at them and said in my loudest voice that could still be considered a whisper, “Shut up! Shut UP!” and then calmly sat down.

I swear, they did not make a peep throughout the rest of the movie.

At first I wondered if I might have been too harsh but I soon concluded, no, somebody has to put the kibosh on this kind of rude behavior. Plus I wanted to set a good example for Connor, who didn’t bat an eye. He already knows I’m a whack job.

How about you? Would you have been the Norma Rae of movie goers, standing up for your rights? Or would you have seethed in silence? Or are you so easy going that chatting movie patrons don’t bother you at all?

You go Linda! I would not have been able to enjoy the movie, knowing they were behind me plotting revenge. lol. I have, however, changed seats. Many times. My record is 3x in one movie. My 10 year old is pretty used to it, but on the 3x day he let out an exasperated "Mommmmmm!" I'm a magnet for loud talkers, seat kickers, wet sneezers and beepy texters. Speaking of phones, I got a droid a month ago and so far, all it will do is receive calls. Smart phone my ass!

Oh, I have many times. Last time I was there, the girl in front of me kept texting on her cell phone, so the bright light was shining right in my eyes constantly. Finally I tapped her on the shoulder and said "If you don't put that away, I am going to take it away from you and if I'm feeling generous you will get it back after the movie ends." She put it away.

Unfortunately, this is a sad sign of the times when shussing an inconsiderate jerk in a movie theater could potentially turn into a dangerous"road rage" type situation.
Quite simply - people DO get shot over this stuff.

Citing examples?
One person was shot at Sam's Town Casino in Henderson, NV several years ago for asking someone to be quiet during the movies.

In Southern California recently, a man was stabbed in the neck with a meat thermometer by a woman, simply for asking her to refrain from using her cell phone during the movies.

Just be careful out there because people ARE crazy & you never know who is packing a gun.

The rudeness of many people seems to be getting more and more out of hand everywhere you go! Good for you for actually saying something! I'm surprised the rest of the theater audience didn't applaud!

I came here from 47 & Starting Over after seeing your blog on her list. I'm a Linda Lou too (and unintentional poet!) Mine is first and middle names, even though I blog under Mellodee.

Like your style, so I signed up as a follower. Stop over and visit me at
http://mellodeemusings.blogspot.com/, come by anytime and say hi!

A gaggle of older women ruined The Proposal for me when they did the very exact same thing. Only I turned around DURING THE FEATURE PRESENTATION (sorry for yelling, it still peeves me) and said to them, "Excuse me, but as you can see the movie has started" and they did not shut up, for awhile. And that was after they laughed at me! Then occassionally the one behind me had to let me know she was still there by kicking my chair...if I didn't want to see the thing so bad, I would have gone to the manager and demanded to see the film at a later time. Blood pressure really really went up during that movie...Betty Wannabes :(

I totally would have said something. That kind of crap bothers me. You pay good money to watch a movie in silence. You should get what you pay for even if the movie sucks!

I agree 100% with you!!! We are almost always the first ones in the movie. I hate to be late!!! My husband does not allow talking ....I use to ask questions of him in my younger days. I would have done exactely what you did and my husband would have been mad but oh well. I hate talking or any kind of noise when I am watching a movie!!

Linda, I can fully relate for I too have about a negative 10 tolerance for blatant acts of public discourtesy. And it is for that reason alone that I have resigned myself to movie watching in the TOTALITARIAN sanctuary of my bedroom.

You pay good money to watch a movie & during the first 20-30 are bombarded with unwanted advertising. I don't have a problem with trailers, but c'mon! Too many damn commercials!

I would have given you a standing ovation (after the movie) BUT I have to admit I'm with Anon. I would be scared to do that to anyone these days for fear of setting someone into a rage and possibly getting violent toward me.

VERY SAD. But I am glad you did it and that it worked! Some people are just so f'ing rude and inconsiderate!

Bravo! Just one more reason why you, Linda Lou, are my hero!

I did almost the exact same thing at The Avengers a couple weeks back. The comic book nerds behind me talked loudly through all of the ads and coming attractions. I too gave them the benefit of the doubt that they would stop once the movie began, but I was wrong. So about five minutes in I interrupted their full volume (not whispered) conversation with the question, "Were you gentlemen planning to talk through the ENTIRE movie?" Incredibly they apologized and barely made a sound for the rest of the film.