First, Happy Chanukah to all my Jewish friends. 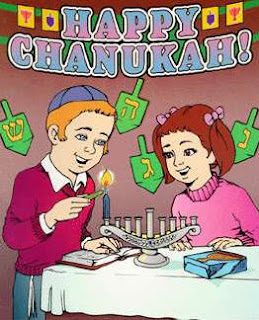 (Okay, not the best image.)

As you know, I'm a big fan of the Jews.  Big fan.  And evidently, so is my mother.  Yesterday I saw a comment Mom made on Facebook in response to my quirky lesbian aunt Joyce's post announcing she bought a new car--it said "Mazel Tov!"  Well, at least I know where I get my wanna-be-Jewness from.

You know who I bet doesn't love Jews?  Walt Kowalski.  That's Clint Eastwood's racist character in the 2008 movie, Gran Torino.  Mike and I watched that Tuesday night, and I can't believe how much I dug that film.  We were more than just a little surprised at how funny it was.  You kind of feel bad for laughing (especially at this one racist as hell "Three guys walk into a bar" joke), but Walt's character is so well developed that you can see what a good man he actually is.  Really, I was blown away by this movie.  I have a hard time watching violence--and I did have to hide my eyes at one point--but man, this is a gem.  I highly recommend it, but if you're like super politically correct (then what the eff are you doing here?) you might find it offensive.

Next, here's a beauty tip:  Want a lip color that lasts forever and doesn't make a friggin' mess of your coffee cup, boyfriend, or whatever else you've got your lips all over that's totally not my business?  Try Revlon ColorStay Ultimate liquid lipstick.  You know me--I don't get the mail without putting lipstick on first. This is a great product.

Oh, yesterday I heard from a woman whose resume I did.  She said Tuesday night she responded to some postings on http://www.indeed.com/, and on Wednesday she was already in salary negotiations with a potential employer.  You know I'm full of myself, but I do know how to create a kick-ass resume.  Email me at linda@bastardhusband.com if you want me to work my magic on yours.

And finally, don't forget I'm doing a set tonight at 8:00 at Choices Pub, 6720 W Cheyenne here in Las Vegas.  Stop by if your parents let you go out on a school night.  I'm going to be trying out some new material--hopefully it won't suck.  Fingers crossed.

Fingers crossed for you, Linda.
If I was closer, and not snowed-in, I'd go!

Picture this. A cross country trip with two women wearing this never fade lipstick, complimenting eachother's lips mile after mile, hour after hour. Oh yeah, you were there!
Have a blast tonight! I can't wait to hear all about it!

i used to say i didn't like Clint Eastwood movies, "dirty harry", et al. then i started watching his post dirty-harry movies and he's magnificent. i'm blown away by his work as a director, actor, musical score writer....

Gran Torino was outstanding and moving and so thoughtful.

In agreement about the flick- loved it.

Lipstick! Yes..totally love AND wear Revlon ColorStay Lipstick. Long story short...I had just started my new job as a flight attendant (at age 52!!! Don't mean to brag...) and had just purchased 3 of those lipsticks. The next day we had a major earthquake and lost just about everything. About a week after the quake I was determined to find those lipsticks amid the rubble. So...I put on my gardern gloves to dig through the rubble and a bicycle helmet to protect against aftershocks. I was in a "don't mess with me you friggin' quake! I'm gonna get my lipsticks" mood! Yep..found them and love them. Lipstick you'd risk your life for. ;-)

Laurie, that is too funny, but I can totally understand. You have to have your priorities in life! So glad you're safe and sound, and hooray for Air New Zealand for hiring such a babe!