What a weekend.  I took yesterday off from work because Lori and I figured we'd want to spend an extra day in California, but we ended up coming back to Vegas on Sunday night.  I'll tell you why later, but first let me tell you about Friday night--what a freakin' blast!

I thought I'd be doing a set for a benefit show at the Las Vegas Leatherneck Club sometime next month, but as it turned out, they asked if I could perform last Friday instead.  The Leatherneck Club is a Marine/biker club, and you know I wasn't about to pass up the opportunity for get in front of a bunch of Satan's Helpers.  It was a great crowd and I had so much fun.  Lori recorded the entire show, and once I edit it a bit, I'll post some clips on YouTube. 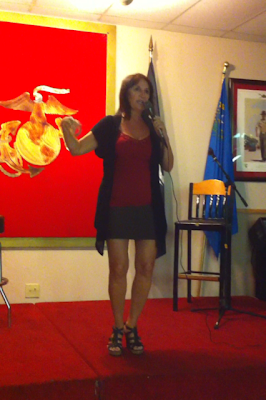 (I always wear a short skirt and/or cleavage on stage so if my jokes suck, at least the audience can have some enjoyment.)

As soon as I got off stage, we zoomed over to Mandalay Beach and got there just as Frampton took the stage.  It was a fantastic show, just as I'd expected.  Peter Frampton is on Facebook and it's really him, if you want to be his friend.  He seems so nice.  Mandalay Beach is a lot of fun--one of those places you'd go to even if you were only marginally interested in the band because the venue is so cool. 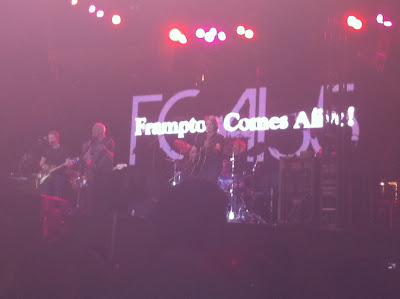 After the concert Lori and I headed over to Big Al's Comedy Club in the Orleans for the Fryer's Club--the weekly gathering for local comics to socialize.  My buddy Kato Kaelin was there again (I'm a shameless name dropper), so I got to introduce him to Lori.  He's a really nice guy.

On Saturday morning we hit the road for California a little later than I wanted because I had some freelance work to finish up.  Then we ran into a major traffic tie-up north of Escondido, and so we didn't get to the Del Mar Race Track until Sunday.  No matter--we had a ball bar hopping in San Diego with Lori's sister-in-law and her husband.  They put us up for the night, which was awesome.

The Del Mar Race Track is very nice, but I still think Saratoga is the most beautiful track there is.  Even better than Churchill Downs. 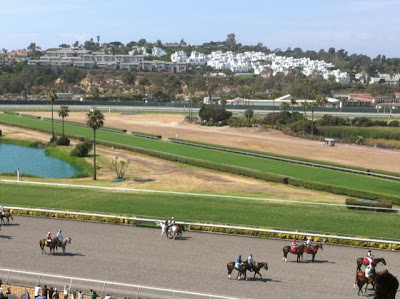 We stayed for a few races and then headed up the coast toward Laguna Beach, which was friggin' packed. I'd never been there before and always wanted to check it out. 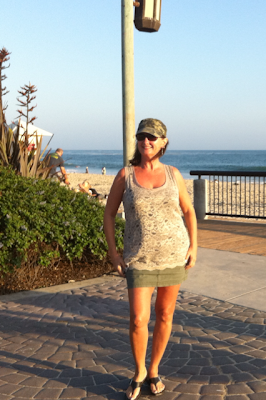 I can't stand traffic and crowds, though, and by then both Lori and I were somewhat fried.  It seemed we'd been go, go, going since we left the house. Southern California is a little too crowded and busy for me, and after watching the sunset at Crystal Cove, we decided to head back to Vegas.  Crazy, I know. 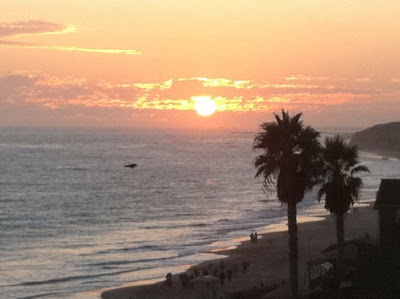 We got into Vegas around 1:30 Monday morning and relaxed with a bottle of wine on my balcony, which overlooks the Las Vegas Valley.  Peace at last!  There's no place like Linda Land.

So this is funny.  We thought Lori was leaving today at 5:25, but we weren't able to check her in 24 hours before her flight. Guess why?  Her flight's not until tomorrow!  Oh, well... sucks to be stuck for another day in Vegas!

Sounds like a fab weekend to me!
And finished of with "bottle of wine on my balcony, which overlooks the Las Vegas Valley", perfect!
Look forward to the video!

I am glad you and your sister had a great weekend. I can't wait to see the video that she took.

I like Peter Frampton's music. I hope that was good too.

Laguna Beach...That's were my blog header picture was taken. It's a paradise...

Glad that you had fun!

Well, you look like a sex bomb in both pictures (i hate you) Can't wait for you to post your comedy gig. I need a good laugh ... I joined Weight Watchers and I'm hungreeee! Yes ... Cali is a freakin' zoo. I want out of this state! too expensive, too crowded, too everything. Strange coming for a native but it's the truth. Glad your back! Hey - there's a possibility I'll be in Vegas in November. Will keep you posted!

I am so thrilled to hear you had a nice time. Sounds like my kind of weekend. Can't wait to see one of my fave female comics on youtube.

Linda Lou! Thanks for a great week! I miss you so much already! There's no place like Linda Land and no person like Linda Lou!

Ok Linda...I have to say, you have smokin' hot legs! They are tanned, toned and smooth. I don't know why I'm telling you something you already know...just another reason to be one of your fans, I guess. :o)