Something to shout from the rooftops

Lori left today--bummer.  We have such a blast together, though we were a bit out of sync on our trip to California.

"Can you believe we didn't see one bar we wanted to go in?" she remarked on the way back to Vegas.

And it was true.  We drove around a good part of Southern California and never came across a tavern, pub, or biker bar that beckoned us to stop.  Same can't be said of northern Alabama, that's for sure!  We're just a couple of weirdos.

Here's a picture Lori took of me at the gas station before we hit the road Saturday morning. 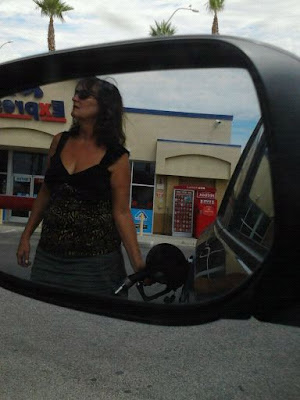 I was like, "Why the hell are you taking a picture of me pumping gas?"

She said it would be good to document that we did, in fact, get gas--unlike the start of our East-West cross-country road trip last November.  This is hilarious, if you haven't seen it yet.

That is so freakin' funny.  Every time I watch that I crack up.  Our mother, Dee Dee Idaho, is such an excellent traveler--we dragged her all over the place, including a few biker bars, and she happily went along for the ride. 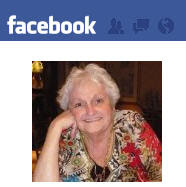 I can remember when my mother was 29.  Damn!

If you've read my book, you know that Mom suffered from agoraphobia for years and hardly ever left the house.  Now she's making up for lost time, traveling around the country--even flying by herself--and having fun, as you can tell from her recent Facebook posts:

"Going to Ste. Chapelle winery and sit under the trees, drink wine and listen to Jimmy Buffet music."

And then a few hours later:

"Had a ball. Not only did we drink wine and listen to Jimmy Buffet music, but we danced up a storm, barefoot in the grass. I'm exhausted. I wish all of you were here; you would have loved it, too."

We tease her and say that all those years on the couch must have preserved her; she's outlived most of her friends in Albany and when she moved to Idaho, she had to get herself some younger BFFs who can keep up with her.

I am so glad you and your sister had a blast together. I just can't believe you didn't find a bar you both wanted to go into. Then your sister taking a picture of you putting gas in your car that is funny. The video is great too. I was laughing. I hope your mom really had a great Birthday. She does not look like her age at all.

AWWWW ... I remember my mother when she was 29 too. My little friends all had big brothers and sisters so their mother's were older than mine. I even had friends who would ask me if my mom was my sister. I wish I could say my mommie is 77 but I lost a few months after her 70th birthday. Still miss her sooooo much. Give your mommy a big hug.

Awww, memories. I feel like singing. lol That's a pretty cool mom you got there Linda. You're sister is pretty great too. I am so glad you get out and have a good time with your family. The video made me laugh so hard I teared up. Very very funny.

It's killing us, so mature aren't I? I love this video!!! What a great time we have together!!!