An aging nymph goes to LEGOLAND, or as David Byrne would say, "This is not my beautiful life!"

I know what you're thinking. Remember when Linda was a hip swinging single writing about her adventures making the scene in Las Vegas?

Yep, it's come to this, people.  LEGOLAND.  Mike has long been threatening a trip to Disneyland, but I said no freakin' way.  I can't stand that Disney shit and besides, I hear the place is full of birds.  But I softened on LEGOLAND and so last Friday afternoon we packed up and began our journey toward San Diego with his two kids and my grandson in the back seat. Connor's iPad kept the boys entertained the whole way while the little one watched Netflix on my iPhone.  All were wearing ear buds--thank you, sweet baby Jesus.  Anticipating the 5-hour trip, all I could think of was a comic friend's line that he asks a girl on a first date:  "Does this smell like chloroform?"

Thankfully, the drive was relatively quick and painless.  We found our hotel no problem and it was a gem; we got a two-bedroom suite at the Marriott Townplace Suites in Vista.  Marriotts are always of consistently high quality.  This one offered a continental breakfast and a complimentary shuttle to the park, so it worked out really well.  I highly recommend.

LEGOLAND is in Carlsbad, CA, and we woke up to some perfect southern California weather.  But during the shuttle ride my sunny mood darkened when I realized, This place is gonna be full of kids.  You'd think I might have put that together beforehand, huh? Of course I love the children in my immediate circle, but how many times do I have to tell you I have the patience of John McEnroe in five o'clock traffic? Not exactly a kid person.

We walked through the aquarium when we first arrived at LEGOLAND.  Overall it was pretty uneventful.  Our first stop once we got into the actual LEGOLAND park was Miniland USA, which I actually dug.  There were all these reproductions of areas of the U.S., all constructed with LEGO bricks.  Like my reader Jazzy Cazy, I am fascinated by miniature replicas.

I posted a few of Las Vegas earlier this week  Check out this one of the Venetian. 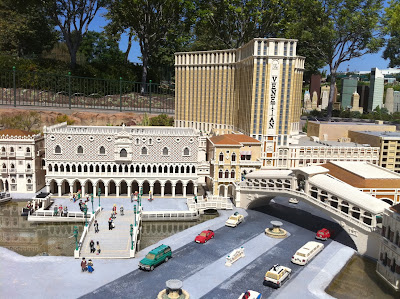 In addition to the New York, New York casino in Las Vegas, they also built a mini Manhattan. 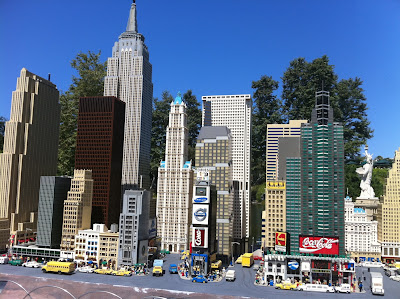 Here we are in New England. 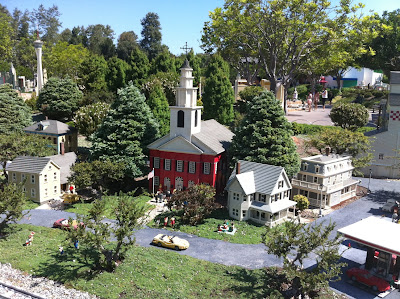 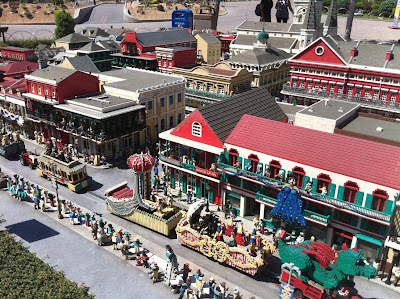 How freakin' cool is that?  I took a million pictures of these little places.

Unfortunately, the most interesting part was over in the first half hour and I spent most of the next 7 hours waiting for Mike and the kids to go on rides. 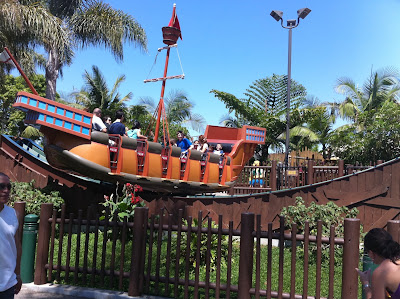 There was a 45-minute wait for some of those rides, which gave me plenty of time to think.  At one point, I was sitting next to a row of about seven empty baby strollers parked against a wall and thought, man, I remember when I used to hang out in places with a row of Harley Davidsons parked outside.  Wasn't it just last month that I was dancing on the bar at Hogs and Heifers?  Has it really come to this?

The people watching was interesting.  As the kids romped in the water, Mike and I observed the families that walked by.  Almost without fail, the mother led the way, pushing a stroller with another kid at her side as the dad dutifully followed along a few paces behind, wistfully remembering the days when he'd spend a weekend afternoon watching the game and drinking beer with the guys.  Back when he still had some testosterone flowing through him.

Our kids had a ball, though.  There's plenty to keep them busy.  Here's Connor climbing a rock wall. 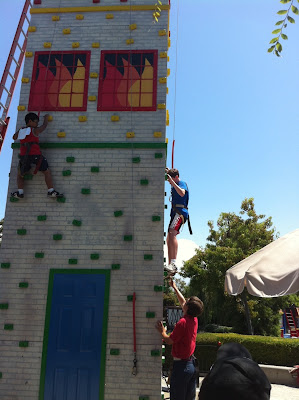 He's gotten so big since I last saw him in April.  And I gotta say--the only thing worse than having a kid screech, "GRAAAANNNNNY!" in a crowd of people is hearing that from a really tall kid whose voice is changing.  (How many times do I have to tell you, it's "Aunt Linda" in public, sweetheart?) 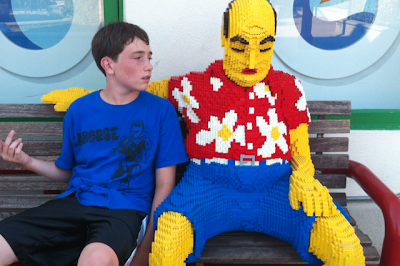 LEGOLAND really is a beautiful park--it's very well maintained and there are hardly any birds.  At one point while the gang was in line for a ride I ducked into a cafe and serendipitously asked the cashier where I could get a beer.  I figured there had to be some kind of saloon somewhere, but alas, there is no alcohol in LEGOLAND.  So if there was one place for improvement...

The next day we stopped at Carlsbad Beach before hitting the road back home.  Again, it was a gorgeous day. 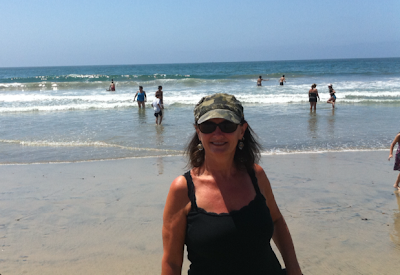 The kids were equally awesome on the drive home.  It's great that they all get along so well.

So I survived LEGOLAND and 10 hours of driving with three kids.  I'm as surprised as you are.  Mike still wants me to go to Disneyland, but I said there's no freakin' way.  I'll make the arrangements and do all the navigation, but I'll be at the hotel poolside with a cocktail while they visit Mickey and his friends.  Yep, that's where you'll find me.

My 13 year old son says, "Awesome." He has loved legos his entire life and has been dying to go to LegoLand but, alas as you know we live in Tornadowest in the ever exciting Aintshittodoville.

I don't know if I can do kiddie parks anymore, I have issues with other's kids and more issues with their parents. Waiting in line for anything without my walker/pottychair (I'm slightly exaggerating) is a nightmare. lol

Glad you enjoyed it and please share more photos even if it's on FB. My son is dying to see more. Thank you.

By the way, the reason Disneyland has so many birds is because they are flocking towards the giant mouse. Mmmm mouse stew with a side of princess toe sandwiches; a fine meal for any bird...if you ask me.

"I have the patience of John McEnroe in five o'clock traffic? Not exactly a kid person." Hehe, this describes me as well. Sometimes when the little shits are really annoying me... like at the grocery store or a restaurant, I like to thank their parents for the "birth control". The cries of my biological clock have been replaced with a shout out to Jesus for allowing me to keep my sanity : )

Ahahahahahahahahaha.....this IS your new life now, babe! And I do remember the good old days with bikers and beer.

I'll be there in 20 days to rescue you. Will you be on the playground or somewhere cutting out paper dolls??? hahahahahahahaha

Linda - I LOOOOOOOVE DISNEYLAND!!!! It's so clean and pretty and EXPENSIVE. But I love it!

Hope you had a book to read while waiting for everyone to finish up on the rides. My parents used to do that for us -- just sit for hours and wait for the kids to spin themselves sick. You're nice, Aunt Linda!