A sad leap day for fans of The Monkees

While driving to work today, I listened to a story on NPR about leap year babies.  The broadcast got me thinking that although leap year might be a crappy day for a birthday, it would probably be a good day to die because then your family would only be sad on your death anniversary every four years instead of once a year.
How’s that for a line of reasoning?
Well, I sure as hell never thought that Davy Jones would die on this leap year.  As I write this, I’m still in shock. 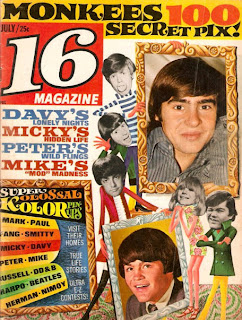 Oh, how I loved The Monkees .  When I was no more than ten years old, I’d run to the A&P to pick up the latest 16 Magazine the day it came out.  I’d pore over it  in the tiny back bedroom of the upstairs rented flat we lived in before my parents bought the house on Lincoln Avenue, gazing lovingly at pictures of Davy, Peter, Mike, and Micky.  Little did I know that would be the beginning of a life of boy-craziness.
I listened to my Monkees albums, which I bought with my own money, for hours on end on my little record player (complete with the penny I’d place on the needle to prevent skips).   I’d read every word of the liner notes and stare into each photo, imagining what it would be like to meet them in person.  I was sure that if Davy and I knew each other in real life, the twelve-year age difference between us would be totally insignificant.  I'd be out of high school before he turned thirty.  We would make our relationship work.
I remember sitting on the floor next to my bed one night, listening to an album that had photos on the back cover and stats of the four of them--their birthdays, places of birth, and height.  I think it was Meet the Monkees.   Anyway, my mother came in and she was being really nice, quite the opposite of her "Jesus Christ, pick up this goddamn room" mood.
She asked to see the album cover I held with such adoration.
"Isn't Davy cute?" I said.  "He's the cutest one."
Mom looked over the front and them scrutinized the info on the back.  "He's only five-foot three!" she exclaimed, handing me back the album cover.
"That's okay," I called out to her as she left the room.  "I'm only four-foot six."
My friend Lisa Gioia-Acres said today in a Facebook post, "Davy Jones from The Monkees has died.  A little bit of my childhood went with him.  R.I.P."
So true.
I found this little tribute on YouTube.
What's your favorite memory of The Monkees?

Awwww Linda, what a sweet memory. I did a post on Davey Jones too. I actually saw him in person in Palm Springs a few years back. He was handsome and adorable and he looked great. So sad ... he passed much too young. I have great memories of the Monkee's and to this day still love their music.

NOOOOOOOOOOO!
Not Davey Jones!
Who is Marcia Brady going to book for her high school dance this year?

This is so sad! Next someone is gonna tell me the Banana Splits Show wasn't real! My childhood is slipping away!!!!

OK, I'm better now. My favorite memory of The Monkeys is how my girlfriends and I would watch it and then go outside and do that cross over leg walk up and down the street. I don't know why that was so fun, but we would just laugh and laugh :)

way too young, for sure. While I thought he was certainly cute, I always went for the underdog, which is why I liked Peter. He just seemed shy and he didn't get all the adoration of Davey, so he was my guy.

My first album was the Monkees. Last Train to Clarksville really got me. Like you, I loved getting the teeny bopper rags to pour over the photos of 'my guys.' The the t.v. show? Please, I was always glued to the screen!

I could have written this post! Watching the YouTube videos brought back so many memories and like Mandy B, my girlfriends and I would do that crossover walk too! So young - so sad.

yes, this has been a sad Monkee day post a thon.
I did one too!

When The Monkees TV show would come on, my little sister and I would dance around the room singing the theme song. We knew every word.

Linda: Hey, that's a really nice post on Davy Jones. & The Monkees' albums still hold up! I was playing parts of HEADQUARTERS and PISCES, AQUARIUS, CAPRICORN AND JONES at work last week! And "Your Auntie Grizelda"! And folks thought it was just old '60s hits... Anyway, really nice write-up.

I am so lucky to have memories of growing up with you and The Monkees! Watching the show, reading the teen magazines, listening to the albums are all great memories! Thanks for being the best big sister and Monkeeing around all those years!!!

Loved reading this - its been amazing to discover how many of us were huge Monkee fans! On my 9th birthday I had a party with a MONKEES birthday cake! It had each of the guys (well, you know little plastic ones) and was just so damn cool. All my girlfriends envied that cake.

But,once I was introduced to David Cassidy - Davy Jones was no longer my main man.