Sorry about the abrupt ending of my last post.  It was censored by the blog police, who didn't want the world to see where the poor defenseless Scrabble game woke up the next morning just because I was slaughtering him in what would be our last game of the night.


"It's not easy being married to a blogger," I told my beloved.  (Jeez, it was like the one day he decides to check out my blog...)  But I also told him that I joked from Day One that I'm only here for material, but seriously, what the hell good is being married to an absent-minded genius with ADD and young children when I'm supposed to be in the prime of my freedom years and not being able to write about it?  Hell, I wrote a whole book about my last ex-husband and he had no problem with that at all!

"Well, you should have asked me first," he said.

"You're right, my darling.  Now, can I put the picture back up?"

"And can I post the picture of Louis C.K. on the cover of my Entertainment magazine that you defiled?"


I love that Mike gets jealous, especially of Louis C.K.  Like I'm ever going to meet him, right?  Much less he'd be so smitten by my charm that he'd insist I leave my husband and run off with him so we can do comedy shows on the road together and develop brilliant creative projects.  Like a screenplay about a short-tempered, middle-aged female comic enjoying her freedom years in Las Vegas who marries a middle-aged computer genius with ADD and young children and then decides to chuck it all when the most edgy and successful comic of his day sweeps her off her feet.  Like that's ever gonna happen, right?

Oh, man, I do love Louis C.K.;  I have ever since I saw his first Comedy Central special years ago.  First of all, I have a thing for redheads, which started back in 1966 when I saw Billy Mumy in the first Lost in Space episode broadcasted in color. 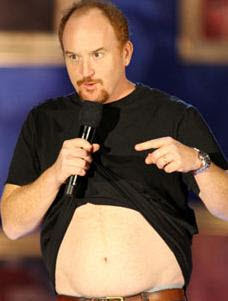 Plus, Louis C.K. has what I consider the perfect male body.  I can't help it, but I like a man with a belly.  It's so freakin' manly.  (Guys, forget running and working out in the gym--if you really want to make yourself attractive, sit down and write some jokes.)

Now he's selling tickets to his fall tour exclusively on his website.  Every ticket for every city is $45, including taxes and fees.  No Ticketmaster rip-off here.  I think only a performer who's already established a following would be able to do that, but still--this is a guy who appreciates his fans.  That's another thing--he truly seems that if you knew him, you'd think he was the greatest guy on earth.

Granted, Louis C.K.'s brand of humor is not for everybody.  I think he's brave and amazing; Mike doesn't see it at all.  Which is probably why he rolls his eyes when I gush about him.

But have no fear, dear Michael. Even Louis C.K. couldn't tear me from you, you delicious hunk of man.


And as for the Scrabble game, I ended up salvaging it from the trash and we stayed up playing last night until 2 a.m.  (He won all three games--thank God.)  And after that... well, Mike's right.  Some things aren't meant for the blog.

How about you?  If you're a blogger, have you ever written something that pissed someone off?  What's your take on Louis C.K.?  Are you watching the new season?  What do you think?

Yup, I find Louis C.K. disturbingly riveting. Michael's gorgeous. I have pissed off several people who have found my blog, to which I said, "Don't read it then." They find it disturbing that I write so frankly about my life, even though very little of what I write has involved them. Oh, well. Not likely to stop me...

I'm so strong-minded in my posts that I'm sure I've ticked someone off, but nothing noteworthy (that I know about). So I should stop losing the weight then? :P

@ Jeanette: I know what you mean by "disturbingly riveting." The episode last week was a case in point. And don't let anyone stop you writing about your life! Sometimes the honesty is too much for people to take since it hits so close to home.

@ grrouchie: Louis C.K.'s been in Vegas twice that I know of. I saw him at The House of Blues and The Joint. This time around, he's playing different venues--the ones that will go along with his unique method of ticket sales. Looks like the closest he'll be is Phoenix. Check out his website for details!

@ Jeanette: Oh, and I think Mike is gorgeous, too!

1. I wrote a post on my blog intimating - well, downright saying - that "chicks dig jerks." The men who read me all agreed with me. The women, not so much.

2. I think Louis C.K. is funny but I'll never forgive him for COMPLETELY STEALING my experience with someone who I thought was driving the same car as me. OK, maybe it happened to him TOO, but he had a camera and a mic, so I guess I lose.

3. I have a great respect for women who like men with a belly. Three guesses why.

Gary, I LOVE Rhode Island! We used to bring our kids to Charleston Beach, and Newport is a great place for a girls' trip. Do you know the Griffins in Quahog?

I don't agree that chicks dig jerks, but I do think that guys that come off as too nice don't fare that well with most women. I don't know why. Poor men--how can they possibly know the delicate balance we hold them in?

Shame on Louis C.K. for stealing your material! No wonder why he's become so successful.

I know why you respect women who like a man with a belly: we're not superficial. Might you yourself be such a beefy gentleman? (I also don't give a shit whether or not a guy is losing his hair.)

245 pounds of awesome, with skinny little legs to boot!

Know the Griffins? I'm friggin' surrounded by them!

(expect an email from me shortly - my resumé needs a little overhaul and Josie says you do that, so I might be throwing some business your way)

ADD is complete bullshit!
Nothing more than a faux "disorder" made-up as an excuse for self-indulgenent, lazy people who have no sense of discipline!

ADD in children is simply a matter of feeding the little brats too much sugar.

I tweeted to him that he was so funny I wanted to blow him. He replied with a "thank you" needless to say I could've died from joy. No if only he would let me blow him!

Carmel, you are too much! XOXO

I LOVE LOUIS C.K.! He's really, really funny and I don't know if you know this girlfriend, but he's half MEXICAN. Yes mam. He actually lived in Mexico while he was growing up, speaks fluent Spanish and I LOVE THAT! So there you go. Latinos come in all kinds a colors LOL!

Yes, of COURSE I know that Louis C.K. is part Mexican--he was even born in Mexico City! I believe he was the only redhead in Mexico at the time...

Miss you, too. Please come back to Vegas and SOON! XOXO