Good news! And a little bit of everything

The big news, which you may have already seen on Facebook, is that I finally got a job!  It's the one I wanted, too--doing instructional design work from home.  Can I hear a chorus of "Hallelujah"?

The call came in on Tuesday while I was on the phone with another company, who had contacted me a mere 10 minutes after I uploaded my resume to their site.  That in itself was pretty freaky--my resume didn't go into a black friggin' hole like it evidently had for the past five months.  In fact, earlier that morning I heard from another yet company about a position that looked promising.  And then later in the afternoon, I got a call from a recruiter about another job. Suddenly I turned into the prettiest girl at the party!  He called me again yesterday, trying to lure me with a pretty nice salary, but I said no can do.  Cubicle life with structured hours and a measly two weeks off per year?  Only as a last resort.

As you know, I love to work from home, and as long as I have Internet access, I can work from anyone's home--meaning I can spend more time with my family in Albany and my mother in Boise.  No alarm clock, no stupid work clothes, no sitting in traffic... I'm a happy girl.  I start on Monday and I can't wait.

Hey, this is really weird.  Monday afternoon Mike and I saw this car in the parking lot at the Walmart grocery store.  Look at the freakin' birds around it. 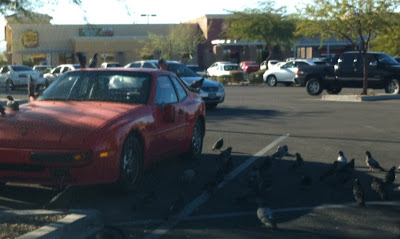 What the hell, right?  Why would there be birds just hanging out near a car and on top of it???  The car looked like it was abandoned, but still, you never see birds around a random car like that.  There were many more than what I got in the photo. Any ideas?

That freaked me out.  You know me and birds.  I was ready to call Child Protective when I saw these photos on Courtney's Facebook page. 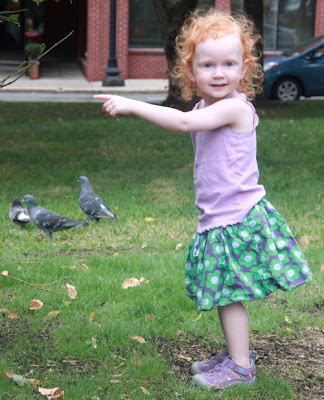 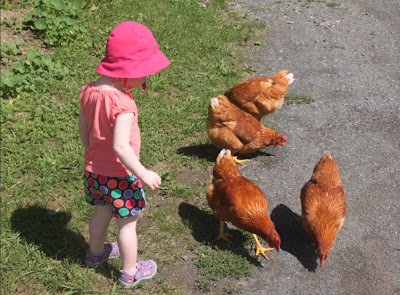 While I'm out stealing Facebook photos, here's one of my sister Lori's son, Cameron, on the day Superstorm Sandy was expected to hit Albany.  Thankfully, it never made it up that far.


My nephew is 19 and has been a volunteer fireman since he was 15.  He even teaches classes.  Cam is one of the lucky ones who always knew what he wanted to be when he grew up.  Most of us are still trying to figure that out, right?

Finally, I know I've been slacking off on responding to comments, and I want to address a question Memphis MOJO asked regarding a recent post:  "So what is the difference between a comedian and a comic?"

Good question!  Billy Crystal explains the difference like this: "The comic makes you laugh while the comedian makes you laugh and gives you something about which to think." Comedy coach Steve North says, "A comic says funny things or makes funny observations, whereas a comedian is a funny person." Looks like everyone has their own idea of what the difference is.

Dictionary.com defines comedian as "1. a professional entertainer who amuses by relating anecdotes, acting out comical situations, engaging in humorous repartee, etc. 2. an actor in comedy. 3. a writer in comedy. 4. any comical or amusing person."  It defines comic as "a comedian."

So there you go.  They mean the same damn thing.

I am happy for you even though we won't be work buddies!

For what type of design work are you providing instruction?

Big congrats on the job! Sounds like it will be perfect for you.

Congrats on the new job and thanks for the explanation about the question I asked.