I know a lot of you landed here at one point or another via blogger extraordinaire Hurricane Mikey's site.  A former poker dealer, Mikey had a wildly popular blog about his antics on and off the job here in Las Vegas.  In Summer 2010 he moved back to Tennessee to be closer to his loved ones, and almost immediately faced a life-or-death battle with a blood clot in his lungs. Mikey won; a mere two months later, he was well enough to take a cruise with his family and since then he's been committed to improving his health.  Last April he had gastric bypass surgery (or something like that--I'm not sure of the procedure's exact name) and since then has lost about 125 pounds. He's still has a way to go to meet his goal, but man, he is determined.   He looks fantastic!


Mikey hasn't posted on his blog in a year, but he's doing fine. Now, anyway. Last week was another story; he gave us another scare.  Earlier this summer he ended up back in the hospital with another round of pulmonary embolism problems.  They did a CAT scan and his doctor noticed his lymph nodes were swollen, so Mikey was referred to an oncologist. Nobody, NOBODY ever wants to be referred to an oncologist, right?

Since then they ran all kinds of tests, but couldn't nail down what, if anything, was wrong. Last Monday he went in the hospital again for a couple of days for a biopsy.  I talked with him for quite a while on Thursday night.  He said they're hoping it would come back negative (duh), in which case he'd be fine. Otherwise, he'd be looking at one of two types of lymphoma. He said he'd be finding out the next day at his 11:00 appointment with the oncologist and promised he'd let me know either way.

I woke up Friday morning to a text that read, "Cancer free!  Woot!"  Oh, happy day!

With this latest ordeal behind him, Mikey will be back to work at his this week, and will continue to work toward his health goals--he's turned himself into an avid hiker.  I've offered him to guest post on my blog whenever he wants--let's hope he takes me up on that, or better yet, gets back to posting on his own blog.  He's a natural writer, and I know he'll do something with all that talent. Because if for no other reason, I'll nag him like crazy.

So long sigh of relief for Mikey.  As you know, I have quite a few friends who've been struggling with health issues, including cancer.  If you haven't checked out my friend Lisa McGlaun's blog about her experience with breast cancer, Dispatches from Planet Pink, be sure to do so. Very enlightening.

Recently I wrote about my friend Donna, whose husband was recently diagnosed with ALS.  Donna raised over $1500 in donations for her ALS walk.  And my friend Chuck in Albany, who needs a kidney and liver transplant, met with the team in Boston and is one step closer to having that be a reality.

Speaking of, I posted this on Facebook yesterday--a text my grandson, Connor, sent me. 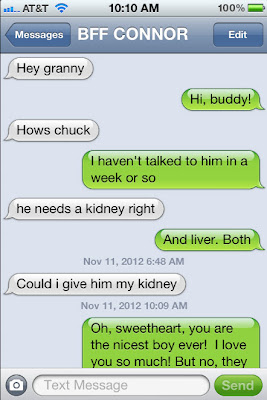 Can you see why I adore that kid?

I'll admit I found your blog through Mikey's and I am so glad to hear that he is doing well. I agree with you he needs to continue blogging. He made everything that he did very interesting as you do! Congrats on Mikey and Linda keep up the good work!

Thanks for the update on Mikey-I check his site every so often just to see if there is any updates. Glad he is doing well.

So gald to hear about Mikey. I miss his blog as I cruise by quite often to see if he's up to anything. Cancer free and moving into a healthy fun-filled life!! Go Mikey!!

So glad to hear that Mikey is going strong. You know I also found you through Mikey's blog. He is where my screen name came from! Mikey was already such a ladies man, poor boy probably can't fight them off now. Would love to read more from him. You two are the only two people I know that can make everyday experiences interesting enough to read about.


Yes, I'm alive and doing well, and it's good to know that people are still interested in my whereabouts and such.

Just for clarification, I had the gastric sleeve surgery, a little different than a bypass--just as effective, but a lot fewer negative side effects.

Anyhow, I'd love to guest blog for you at some point--I need to exercise the writing muscle again.

Yay for Mikey! I had gastric banding surgery a few years ago and it has been a miracle for my health. Lost 110 lbs and improved my diabetes, got rid of sleep apnea, improved asthma, and yes, now I love to walk.

When health problems get in the way, it can bring you way down. Linda, I loved the way you joked about your Bell's Palsy. It took an unfortunate situation and turned it into a bit of black comedy and fun.

Yay!! Mikey is doing well! Probably has all those southern gals trailing along! Glad to hear how he's doing!!