Thanks for all the great comments on my last post about whether being a creative type is a blessing or a curse.  Great insights there.

Had a really fun weekend.  Friday night I emceed a fundraiser for the Susan G Komen for the Cure organization.  Here I am with a couple of the other comics, including little 7-year-old Gabby Yakchak, the youngest comedian in Las Vegas.  Yes, she's one of us! Adorable. 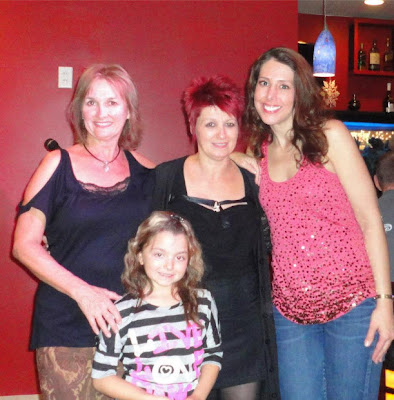 That's me, Gabby, her mother, Lynn Yakchak (who's also my hairdresser, God bless her), and Rosanne Michelle.  The event was held up at the Onyx restaurant in northwest Las Vegas--beautiful place.

After that I headed over to Bootlegger's and did a set in their Copa room.  The venue is gorgeous--just a few doors down from the restaurant--but is a little cavernous for comedy.  No complaints, though.  It was a nice gig and I sold a few books, so yay!

On Saturday one of my girlfriends from the old GE days flew into town.  "Babs" is here for a conference, but came in early so we could spend some quality time together beforehand.  Her real name is Jeneane, but we've been calling each other Babs for almost 15 years now.  There was a woman we worked with named Barbara who was a bit of a pill.  No, she was kind of a bitch.  One day in the lunch room Jeneane, kidding around (as we did), called her "Babs."  She responded with a throw-up burp look on her face and said, "It's Barbara.  I really don't like Babs."  So ever since then Jeneane and I decided we'd call each other Babs.

After a 5-hour non-stop flight from Albany, Babs was pretty hungry so I whisked her right off to Ellis Island Casino and Microbrewery for the $7.99 steak special, which comes with a free 20-ounce beer.  Can't beat it.  (If you've never read my interview with the Ellis Island brewmaster Joe Pickett, click here.)  Then I took her over to the house to see Mike and the kids before we got her checked in at Green Valley Ranch.  I've always been curious about the rooms there and was eager to check it out.  GVR is a nice property, but my opinion on the room is... meh.  I'm gonna say not a great value for the price.  I was expecting more.

Saturday night we took in the show at Big Al's Comedy Club in the Orleans. I'm working to get on this stage--it's a nice club.  Afterward we were going to check out the open jam at the Sand Dollar Lounge, which thankfully is now back to being a blues bar after a regrettable stint as a bikini bar, but instead we decided to chill at The Peppermill, which is always fun.  A guy was coming around taking souvenir photos, so here we are! 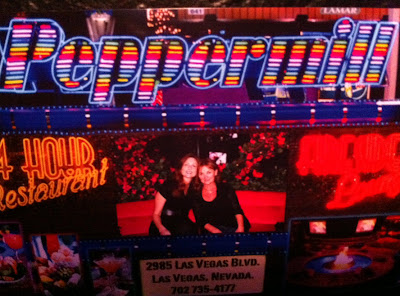 After hanging out in the lounge, we decided to get something to eat in the restaurant out front before calling it a night.  The angel on my shoulder told me to get something light, like soup.  But the devil on my other shoulder thought the strawberry shortcake would be a better idea.  I have no freakin' willpower, but I actually may have gone for the soup had I known my decadence would be so... humungous. 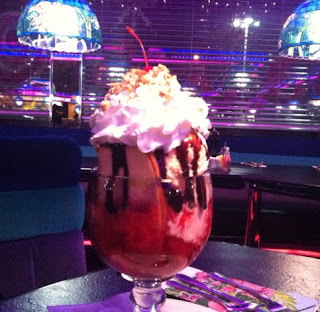 That was so not a good idea.  It'll take a lot of laps around the block to work that off.

On Sunday Babs and I made plans to get together around noon for lunch.  "Is it too early for beer?" I asked.  Being the great friend that she is, Babs answered with an emphatic, "NO!" so I took her over to the Yard House in Town Square.  Hello, Young's Chocolate Stout on tap!  Oh, yeah, the spicy jambalaya was good, too. 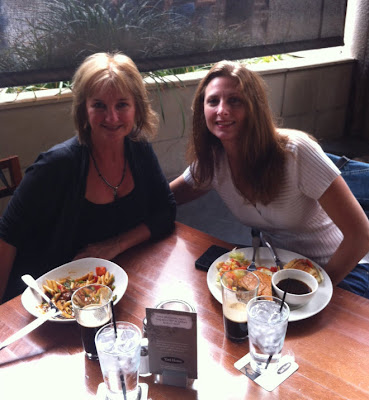 Since Babs had never seen Red Rock Canyon, I thought I'd take her out there.  On the way, we stopped for a look around Cactus Joe's and their amazing selection of outdoor decorations, but then the devil on my shoulder said, "Hey, Babs might like the Mountain Springs Saloon," so we headed up the hill.  Well yadda, yadda, yadda, it was dark by the time we left and Babs still hasn't seen Red Rock.

Babs and I ended our weekend together with dinner at Linda Michoacan, a Mexican restaurant in Henderson with a fantastic view of Las Vegas.  God help me, I probably gained five pounds in two days, but it was all worth it.  I love having friends from Albany come to town and Babs is so much fun.

Now I must go exercise.  I have a lot of extra weight to get rid of.

Ah, you make me miss Vegas. I've *got* to schedule a trip soon.

your life is grand, Babs (if I'm allowed).

@ Tara: You can call me anything!

@ Julie: I mean, you sure do need to schedule a trip out here. I miss you, too!

That strawberry thingie looks too awesome!

Hope you get the gig at Big Al's. ESpecially if it's March/April when we'll be staying at The Orleans.

sounds so WONDERFUL! i'm excited to read about the blog post when i visit you! XOXOXOX

I am glad you had a great time over the weekend with your friend. I also wanted to let you know at my work we do a fundraiser for the Susan G Komen Cure organization.