I love you, man! Is it hard for guys to make friends with other guys? 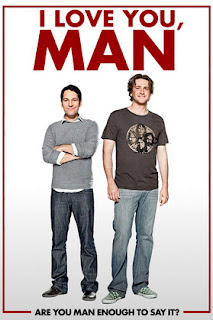 Last night Mike and I watched the 2009 film I Love You, Man where Paul Rudd plays a driven real estate agent who, upon his engagement, realizes he has no friends that are men and therefore no one to be the best man at his wedding. He meets Jason Segel, a laid-back slacker, and a bro-mance is in full bloom.

I freakin' love this movie. Paul Rudd is hilarious--so painfully awkward, with a cringe-worthy performance reminiscent of Ben Stiller in Meet the Parents. He's fabulous, and that "Slappin' da bass" scene will make you shoot beer through your nose.

That got me to thinking, why the hell aren't comedic actors recognized at the Oscars?  Comedy is hard to pull off, folks! But no, you need to have a fake accent, a disability, or dress in period clothing (preferably all three) to be even nominated for the statuette. That's such crap.  Did you know Stephen Spielberg spent $250,000 on a campaign to get Bill Murray nominated for Best Leading Actor for What About Bob? (the greatest movie of all time) because he liked his performance so much?  But noooooo. What a bunch of stiffs those Academy members are.

During the movie last night Mike turned to me and said, "It is hard for guys to make new friends with other guys."  I'd never given it much thought, but now I'm like, yeah, I bet it is. Men are always so ultra-sensitive about coming off as gay that they probably feel weird reaching out to other men for the purpose of establishing a friendship. (Which reminds me, Thomas Lennon, the hot pants-wearing cop from Reno 911, has a small, but also hilarious, role in this film as one of Paul Rudd's prospects.)

Back in Albany, my guys friends have all been friends with each other for decades. It's easy to make friends in college; that's the whole purpose of being there.  But as adults it's different. And Albany is not a transient town like Las Vegas, where you don't have long-established relationships. I think of how I reached out to connect with people when I moved here, by myself, almost 10 years ago. The reaching out part wasn't hard for me--I'm pretty much an extrovert. I could say, "Hey, let's get together" to another woman and not think twice about it, and I certainly wouldn't hesitate to connect with someone because she might think I'm a lesbian.

But for guys, yeah, it might be different. Men can't really say to another man, "Wanna meet for coffee?" I guess they could have an extra ticket to a game or something, right?  Is that how it works?

It can't be easy being a guy.  The other day I was in the auto parts store buying a new bulb for my brake light and looking around at the aisles and aisles of manly car paraphernalia I was like, "How on earth do you guys know what all this stuff is for?" Men are amazing! They build skyscrapers and bridges and replace brake lights. You should definitely try to be friends with each other--you're awesome!

Is it really that hard?

The answer to this question is either "I don't know" or "It depends."

Speaking from my personal experience I don't have a whole lot of friends, let alone guy friends. It is easier for me to be friendly with ladies but I think this is just my personality.

I mean, I have, will and can come off as quite a dick a lot of the time (though I get nicer every year of my life). However, I tend to be less of a dick to the women-folk than to the men and as such I end up being friends with more girls than boys.

Though - it's not exclusive because I do have a number of (semi-recent) male friends as well. I think it's as long as they laugh at my dick and fart jokes then I can accept them.

Guys relate on a different level. With females I might ask them whether or not I should sell my house and move to Florida or something like that. With a guy I discuss poker or sports. Different type friends, different type relating.

Sorry, but I find Paul Rudd as funny as Rush Limbaugh.

So give your phone number to the men at the auto parts store but don't try to get the men there talking to each other!

a lot of men seem to connect with sports -- whether watching it or participating in it like bicylcing or hiking. They also don't seem to dig deep into each others psyche like women do, preferring to keep the conversation focused on external things. I think, just like women, if men are looking for men friends, they join some kind of organization, or make friends through work. My SIL has lots of guy friends, but he's had them since grade school, so there you go.

Guys become friends (rarely) because of something in common, work, sports or something else. A round of golf is a good way to find out about someone.

Linda: Hmmm, good topic. My roommate -- who I've shared a house with for 5 years -- only lets his feelings out when he's REALLY drunk. & then it's usually Not Pretty. He thinks I'm his best friend. He's not my best friend, he's too big a handful, & we're much too different as people. Even after living in the same house for 5 years, it's WAY easier for us to talk about the news or troubles at work -- or God forbid even our health worries -- than to open up emotionally. I'm a pretty open guy, I think, but....
In my old newspaper career, ALL my closest friends were women, & it was GREAT. Not that many men seem to be interested in music or books or movies, but women will talk about that stuff all day! & it was great to be a straight guy & have all those women around....
The not-appearing-gay issue -- it runs deep. It's still an all-purpose put-down. Since I started working in retail again, I've had to drop my voice a bit to appear more "manly." It's sick, but it's true.

If guys have a common interest that brings them together they can be great friends.

I work in a job that has me talking and interacting with people all day. When I get home, talking is just not always at the top of my list. And guys often won't talk about things bothering them -- or have a need to -- as much as women.

I have friends at work but rarely socialize with them outside of work. I know few neighbors and haven't for most of my adult life.

But ... many of my online poker buds have become real friends. I would trust several of them more than most people I know.

That's a good movie and why don't comedic performances get recognized more often at the Oscars-- they should!

As for guys making friends... Interesting question that I hadn't thought of before. Most of the guys I know have friends from high school and college (all these years later).