And life goes on…

Well, yesterday I was back at work in my gray cubicle, though I was no longer consumed with worry about my aunt. I’d like to think all that “she’s in a better place” stuff is true. Maybe it is. It’s still hard to believe she’s gone.

I rode down from Albany to Pennsylvania Friday afternoon with my kids. It was really nice to have them all to myself for four hours; usually when I go back to Albany there are a lot of people around and I don't get to connect with them much. If you’re new to my blog, both of my kids are singer-songwriters. Christopher is a sweet and gentle soul. Courtney is also a sweet and gentle soul, but she’s also a trip and a half.

Court’s an excellent driver, so we took her little Subaru. As we got off the NYS Thruway, I read the directions my sister Lori had written up for us.

The wake, held at the church where Beautiful Aunt Joyce was a pastor, was tough. It was a closed casket, and I swear I could have hurled myself over that thing like a wailing Italian widow. Very sad. We did, however, get a kick out of sentiment on the floral arrangement from her congregation. 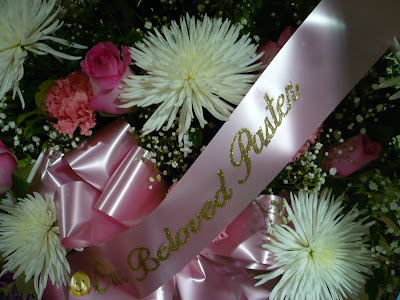 Beloved Paster--too funny. I knew BAJ was into scrapbooking, but I had no idea her pasting skills could mean so much.

After the wake we went back to our hotel suite in the nearby town of Lehighton and had the traditional family beer party. I took this picture of Chris and Courtney in the parking lot. I don’t care that they're 30 and 31—they’re still adorable to me. 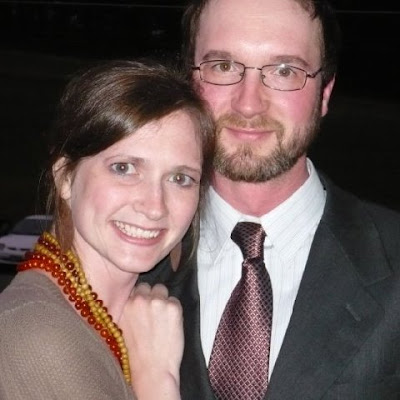 Saturday morning we went back to the church for the service and of course, it was very emotional. Joyce was only 12 years older than I am—way too young to die. I kept thinking what if I only had 12 years left? You never know. Scary.

Because Joyce was a pastor, the service was very religious (duh). Church never clicked with me—even when I was a little kid—and whenever I go to funerals, I realize that when they’re talking about the deceased person, I’m sobbing away, but as soon as they start talking about Jesus, I kind of space out and I stop crying. So in a way, I really am comforted by all the religious stuff. Ironic, huh?

I have to tell you this. Joyce was a bit of a kook, and when she was sick she used to make videos of herself doing a take-off on the old Senor Wences character from the Ed Sullivan show. Her character was called Senor Fuentes and he had little costumes and everything. Here she is hamming it up last Christmas. 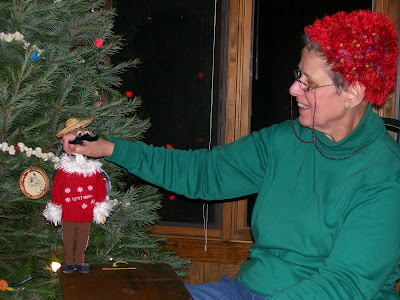 So check this out. In the middle of the funeral service, the minister said, “I can’t believe I’m doing this, and I would only do it for Joyce…” and then he put up his hand, which had a face painted on it. 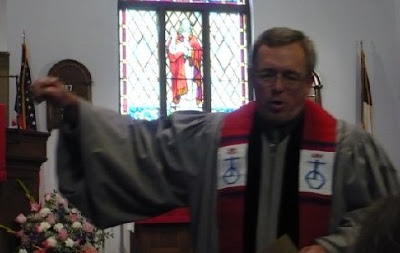 His little painted hand person told everyone that Joyce would want us to go on with our lives and live with laughter. It was the biggest “laughter through tears” scene you could imagine.

At the end, BAJ was taken to a special plot in the little cemetery outside the church. It’s a beautiful spot, but what's up with that sign? 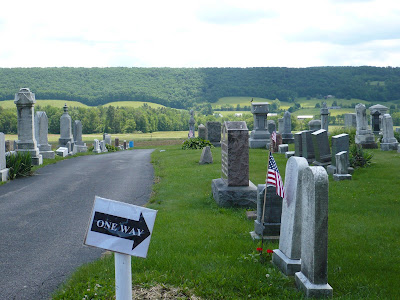 Lori was a pallbearer, and I was so happy that our uncle John selected her for that honor. The loss of BAJ is especially hard for her. Lori was a handful in her day—to give you an idea, she’s now an administrator at the juvenile home where she lived as a teenager. Lori’s both my sister and my best friend, and I can tell you she has one of those strong personalities that some people find intimidating. Not everyone gets her, and not everyone appreciates her. BAJ was one of the people who truly loved Lori unconditionally from Day One. It's a big loss.

In the last few weeks, Lori made several trips from Albany to PA. Most of the time she’d dirty up every pot and pan in Joyce and John’s house, making and freezing meals so they would always have something handy to eat. Shortly before Joyce died, Lori spent a sleepless night holding her hand in the hospice. Every few minutes Joyce would weakly call out to her, “Lor?”

The night after Joyce passed away, Lori was sleeping in her bed at home and she swears she heard Joyce’s voice call her again.

“Lor?” she said. Only this time her voice was strong, like it was before she got so sick. We think it was Joyce’s way of telling her she’s okay.

How about you? Do you think that could be possible? 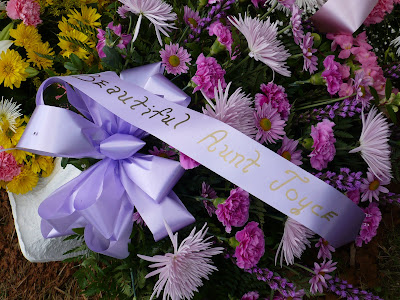 Very nice write-up, Linda, although, I'm still trying to wrap my head around the fact that there was a pastor in your family.

I feel weird leaving a comment here. I didn't get to meet your Aunt Joyce and after reading this I wish I could've. Thanks for sharing Linda!

Absolutely it is possible!
Sometimes I listen to Coast to Coast AM Radio with George Nooey or Art Bell...interesting program & stories, etc.

Anyway, one of their guests was a psychic & commented on how she had the ability to "see dead people" & quite frequently their spirit lingers around for approx 72 hours to help comfort & say goodbye.

Sorry about your Aunt.
She seemed like a cool lady.

Absolutely possible. I have had a few dreams/encounters that have made a believer out of me.
Great post - laughing and crying all the way through. Between "84 east," "Paster," "One Way" and "Senor Fuentes" you had enough material for several posts! I needed you today - thanks for being here and always knowing what to say.

Thanks to all! My blogging buddies have provided much comfort during this sad time.

Sorry about Beautiful Aunt Joyce.
I know you all will miss her. But, don't forget you have another Aunt Joyce up here in Maine who loves you, too.

With tears in my eyes I absolutely with my whole heart believe that is possible.
What a touching post...

Paster. OMG. That is hilarious. And so is the minister's talking hand. Of course, I absolutely believe BAJ spoke to Lori. I have no doubt in my mind that it's possible and it happens.

Of course, now I see how you managed to write an entire post without swearing once. This was beautiful, hon.

I just wanted to tell you that I'm so sorry for your loss! This was a great post and beautiful tribute to your love for BAJ. Sounds like she was a character!

Sorry about your loss of Aunt Joyce. I think you'll be connecting with her in new ways you didn't quite imagine. I hope that all the great memories you have of her keep you smiling. Thank goodness you've got such a great sense of humor.

I love the 84 West/East story. that is me too. And, yes it is totally possible. I felt my recently decease mother hug me one night when I was almost asleep. I heard her call me and I felt a hug, all in an instant. That woke me up! Read James Van Praagh's "Ghosts Among Us." I've never read anything else by him or any other author, but this was helpful at my time of need.

Beautiful post. The Paster thing cracked me up, ae well as the talking hand.

That was such a great post and I am so sorry about your loss. Yes I believe it alright. When my grandmother died at 3am in the morning my brother had his bedcovers pulled up around him. He was very close to my grandmother and lived in the same town as she did. He did not know until the next morning she had gone but he knew she said goodbye. And my brother would have to be the most down to earth, no bullshit kind of guy there is. Your Aunt was telling Lori that she was fine. I have had many spiritual things like this happen and I know we just continue our journey after this life. And your daughter and her husband are cute kids, no doubt about it.

I think I will always sob when I read this but I love having it to read. Thanks for writing this. You are my best friend too. Duh!