Yet another thing that can kiss my ass: Latisse

Okay, I know I’m the most vain person on earth, but even I’m not falling for this bullshit.

I’m talking about an article I just read in the Las Vegas Weekly, our weekly (duh) arts and entertainment magazine, about something called Latisse, “nightlife’s newest secret weapon.” Latisse is an FDA-approved prescription treatment that’s supposed to make your eyelashes long, thick and luxurious. It’s being hailed as a cost-effective alternative to “laborious and expensive lash-extension applications, which are being performed at boutiques and spas everywhere.”

Are you telling me that now we’re supposed to be worried about the thickness of our f*cking eyelashes???

Evidently Brooke Shields is touting this stuff (insert sarcastic comment here). Look at the “before” picture. 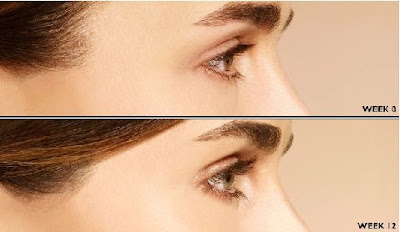 Can you believe she had the nerve to leave the house like that? Well, thank God for Latisse—her career is sure to get back on track now. Lindsay Lohan, there’s hope for you, too!

Seriously, I find this ridiculous. Have you ever, ever looked at a pretty girl and thought too bad she's cursed with those stubby eyelashes? Guys, how many times were you on the brink of asking a woman out and then backed off because of her meager lash inventory?

Do women really need to be told that there’s one more area of inadequacy to worry about? I stopped logging into my MySpace page after being greeted with this: 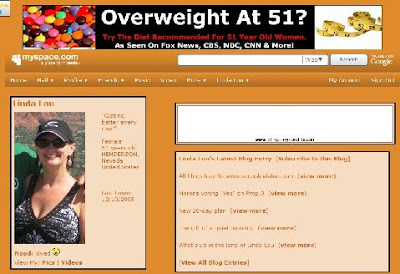 Perhaps the most disturbing line in the Weekly piece was, “Latisse is letting cost-conscious ladies (and increasingly, men) stay competitive in an appearance –obsessed city…”

First, hold on, men are doing this? Sweet bearded Jesus, tell me they’re not straight. Because straight guys are getting into some pretty gay grooming habits these days, like going crazy with the eyebrow tweezers and over-trimming “down there.” Please, stop that shit. Women like men to be manly. We’ll have second thoughts if we’re unsure that you’ve actually made it through puberty.

And second, what the hell are we competing for? Whose attention are we trying to gain, and if long, thick eyelashes are the criterion for acceptance, do we really want to be a member of that club?

Imagine feeling so satisfied with your looks that you’d spend $1200 a year on this?

I’ve attained such a level of perfection, I’m afraid the only thing left is the eyelashes. I didn’t have anything else to spend that $1200 on… every vase in my house is in place, my charities are no longer accepting donations… thank you, Latisse!

Hey, there’s no denying that only four days ago, I wrote “I think women should make every effort to look pretty.” Yes, I said that. And while I do believe we should take pride in our looks, I’m now taking back the “every effort” part. Enough is enough. Skimpy eyelashes aren’t going to make or break your looks.

To anyone who wants to appear more attractive instantly, I offer this simple advice:

And to the drug companies, I say this:

Stop preying on people's insecurities and start finding a cure for cancer!

It is kind of scary isn't it? Fortunately I was blessed with Latisse looking eyelashes naturally (go ahead, hate me) so this is $1,200 a year I can save!

Oh yeah and what is with men and the whole manscaping thing? I'm totally with you on a man looking like a MAN! In fact, hairy chests are pretty much a requirement for me. And the trimming/shaving of their southern regions turns me off. (OK maybe trimming, if there's an afro going on down there but otherwise, leave it alone!) Ugh. Here's a tip guys, lack of pubes does not make your dick look bigger. However, lack of about 30 lbs. will.

Another point to make is when did we become so lazy that we can't just swipe on a layer of mascara each morning? It's so easy and takes like one second to do!

I agree, drug companies need to stop with all the beauty treatment BS and start cracking a cure for cancer.

I don't know how this got FDA approved. It says right in the ad, on Tv, "May change the pigment of your natural eye color." Are you kidding me? I have made my daughters promise that when I cannot color my own hair, put my own brown eyeshadow,black eyeliner and mascara, that one of them will do it for me, in the home. I am that vain, but no more. No tatooing eyeliner either. Scarey business.

I'm stuck on guys overgrooming "Down There".... I almost required the heimlich manuever......!!!

and the book? totally buying it!!

OMG your blog rocks! I saw one of your comments on She Writes and clicked over. You're my new idol, just so you know. And, BTW, I did my own Latisse by super-gluing one-inch fake lashes from K-Mart onto my eyelids...totally natural looking.

I saw an ad for this on TV last nite... what a crock, and Brook Shields was in the commercial... come on Brook..... get a real job.

@ Julie: As always, I'm totally with you.

@ Classic Rock girl: They must think it's much more work to apply mascara, because don't forget--then you have to take it off, too. Crazy, huh?

@ AmyK: That article said it does change eye color! Can you imagine?

@ mzbehavin: Welcome! But don't be like me when you grow up. For God's sake, aim higher.

@ slacker-chick: Thanks! But wait, when you took them off, didn't you pull out your real lashes as well? Superglue in the eye area seems scary to me!

While I do want to look good, I agree there's lots of other things I'd rather spend my money on than this. How about $10 for some lash thickening and lengthening mascara.

I like you, like a manly man not a Metrosexual man. On the grooming down below for men, just enough so that I'm not playing dental floss if you know what I mean.

Damn! My eyelashes are my best feature and now everyone will have beautiful, thick, traffic-stopping eyebrows like mine. How will I differentiate myself? Perfectly sculptured eyebrows? Sweet, bearded Jesus! When will the madness end?

@ Di: Yeah, you gotta wonder about Brooke's career. She's still as beautiful as ever, though I hardly think it's because of the lashes.

@ Debbie: Jesus, woman! You have luscious, thick eyelashes, too? On top of the gorgeous legs, pretty feet, and winning personality? Do you have to hog all the assets?

Oh...I am laughing still! You hit the nail on the head with this one. I hate all the "enhancement", including "male enhancement" drugs...come on! Do we need men gettin' it up for over 4 hrs? I just need about 10 minutes. And, the possible side effects ALWAYS leave me laughing..."may cause blindness, itching, swelling, kidney failure, etc..."so if anyone wants to sign up for these opportunities of illness, step right up and take a chance. No Latisse, no Viagra, no way!

AMEN Sister! Absolutely ridiculous and i so agree with Julie on the male pube grooming. Honestly guys - it isn't very pretty to begin with so a little something to cover it up isn't a bad thing.

@ Caprice: So you think four hours is too much of a good thing? Hmmm...

@ Julie: In all fairness, our equipment is also a little weird looking, don't you think? If it weren't for that, I bet there'd be a lot more lesbians out there.

Oh my....too funny on a Monday morning....Personally, I like a well "man"icured guy from head to toe. My ex used to come home and take off work boots and have the feet of a troll and refused to do anything about them. Too Gross!!! I seriously have to checkout nails,feet, etc before I'll even consider a guy for dating...Which, now looking at all that, could be why I can't get a date..

Oh, Tara, you are so right about hands and feet. If the hands aren't nice, they're not going anywhere, and a guy has to have feet that you wouldn't mind brushing into you under the covers. Those are essentials... deal breakers, in my book.

A guy looks at the whole woman, not parts as one might think. Short eyelashes, what next? If he thinks she is beautiful, she is.

P.S. Thanks for the sign up. I am always humbled when someone does that. Thank you.

Right on Linda! Thanks for making me smile today! I needed that...

I would be happy to try Latisse on my lashes. If it gave me something I really needed like a big orgasm right off the starting line. Zero to 60 in ten seconds. Now that I could use. Otherwise, I'm with you. Cure the cancer, people. Quit batting at our eyes.

LMAO I just saw a commercial for this the other day and was thinking WTF?

Saddly I'm lash deprived, and I'll be the first to admit I'm always looking for a mascara that will do the trick, but holy hell, if I can't achieve the look I want with a $3 tube of mascara, then it sucks to be me! Why would I spend $1,200 to get thick lashes? LW could give two shits about the length of my lashes.

Oh my sweet heavenly Father. You have got to be kidding me?

And we wonder why young ladies are starving and cutting themselves.