Bastard Husband newsflash and the crap on Facebook (literally)

GREAT NEWS! Thursday night I met with Joe Lowers, my comic friend who runs the showroom at Alexis Park, where I had my book launch party. He’s encouraged me to create a one-woman show around my book and he wants to produce it. We’re looking at opening mid-January.

A one-woman show has been in the back of my mind for a while. It's something I think I'd really like doing--more than stand-up. We still have a lot of details to work out, but the concept is on its way to becoming a reality, and like everything else, I just have to take the steps to get there, one foot in front of the other.

I’m very psyched. And what a great motivator to get back in shape—years of sitting on my ass at the keyboard is really starting to take its toll.

Of course, if you’re a Bastard Husband: A Love Story Facebook fan, you’ve already heard this big news. Did I tell you I love Facebook? I used to love MySpace, too, but like a lot of people, I’ve given that up since there’s only so much of that social networking stuff you can possibly do without having it consume your life. It seems most people these days are on Facebook, so Facebook is it for me now. Twitter can still kiss my ass, and earlier this week I deleted my Linked In profile. I just decided I don’t want to play the corporate game anymore; it’s not a ladder I ever wanted to climb in the first place. And my sarcastic updates like, “Linda is busy writing TPS reports” simply couldn’t be helping.

One of my friends at work poo-poos Facebook, saying, “I don’t need to hear from former classmates and others from my past. I didn’t care about those people then, why would I care about them now?” I’m the exact opposite. I love to hear from people from my past! I love hearing about their lives and what they’re up to. People mean a lot to me, even if I haven’t seen them in years. This morning I heard from a girl I knew since first grade who wrote to tell me she’s enjoying my book. Yesterday I got the sweetest message on Facebook from the daughter of my best friend from high school—it was the highlight of my day.

And of course, Facebook makes it easy to catch up with my brother and sisters. Like earlier this week when my sister Stacie posted this:

Stacie is not in the mood to potty train.

The diaper was off for about 10 minutes and she shit on the rug and I stepped in it and I cried. I’ll remember this for a while.

Can you wait at least until tomorrow to admit to laughing? It happened about 4 minutes before I had to get Charlie from the bus and I still haven’t gone back to clean it up yet. I’m thinking of just throwing it out instead. I never did like that rug.

So that little exchange prompted my sister Lori to send me this message:

Can you believe Stacie left the shit on her rug? What if a robber comes in and thinks she shits on her rug?

I was like, I know! That’s exactly why I make my bed every morning, even if I’m running late for work—what if a robber comes in and thinks I’m the type who doesn’t make my bed? And if the robber has to take a shit, I hope he uses the guest bathroom since no boys are allowed in mine.

Are you, too, thoughtful when it comes to robbers? Any special accommodations?

Which social networking sites do you frequent? Are you on MySpace anymore? Can Twitter kiss your ass, too?

And can you believe this little angel would shit on the rug? 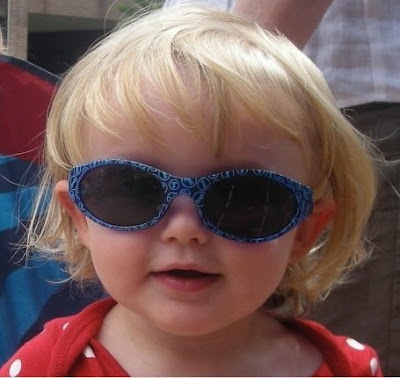 Awww...not her. Too angelic to do that to the rug. Obviously, you all have the same sense of humor. I so relate! Believe me I do.

Congrats on the one woman show. I would love to find out the when's, where's and what times. You'd better believe I'd drive to Vegas for it!

How good is the timing when "chocolate covered" starts off the comments to the shit-covered rug post. Huge congrats re: the one-woman show -- that really does sound like the perfect way to capture your story. If you need a blogpal (I mean me) to brainstorm any visual/sound ideas, feel free to contact me. (I used to make movies (small, inexpensive ones) so I love that tuff.) But I'm sure you will continue to do great. I may not be best match anyway since I never make my bed and as for a "robber", screw him. Not literally. Although I do ascribe to the you-might-get-hit-by-a-bus-and-end-up-in-the-hospital/clean undies rule.

Twitter, schmitter. 40 characters? I wasted so damned much time trying to find ways to say anything in that space, that I'd forget what the bleep I was responding to.

Congratulations. Just found the blog and it just makes me laugh OUTRIGHT. God knows I need to. Stay away from mine. I DO have a sense of humor... just not this second is all.

I was told that, when I was three, I deliberately, because I was annoyed at being deprived of a cookie, left deposits in three places on the border of a rug. I never judge small children. I was hell.

Other than linkedin i had never joined a social networking site, till facebook a month ago. LOVE IT. And yeah, i'm a fan of bastard husband too. :)

LOL, I love Facebook too. I have reconnected with so many old friends...which reminds me, I have to update something over there!!!

I don't believe it. Any more than I believed Stiff did....

Let's see, my MySpace, checked daily is where all my really good stuff goes and where the story really gets told. My Facebook is censored because of family/coworkers, with different lists set for privacy.

I never wanted either of them. Finally gave into MySpace after my 30th bday party when everyone posted their pics there and I couldn't see them. Just got my FB a few months ago. It's a little annoying because EVERYONE wants to be my friend, lol just kidding, but the fat kid who farted all the time in the 3rd grade who's still fat and probably still farts in public is NOT getting approved....

Oh yeah, good to see you have boys/girls bathrooms in your place too. No boys allowed!