How could Little Red Riding Hood’s mother let her walk in the woods ALONE?

So I’m back out in beautiful East Berne now, staying with my friends Tim and Susan. I gave them a little break from me while I was in Las Vegas for two weeks, and the two weeks before that I stayed at my brother and sister-in-law’s house over in Rensselaer County. God bless all of them for putting me up since I arrived here back on May 29. Man, that’s a long time to be mooching off friends and family, don’t you think?

The other night Susan and Courtney were busting on me because my key ring looks like a jail warden’s. It’s kind of funny that a homeless person would have four house keys, but I do—one to Lori’s, one to Tim and Susan’s, one to my brother’s, and one to Mike’s. Actually, I had three more—two I couldn’t identify (probably to the houses I had in Wyoming and Utah) and one to our old house on Homestead Ave. that we sold in 2003. The girls made me throw them out; they said hoarding keys is a sign of mental illness. Oh, the abuse I take.

Speaking of, the first thing Tim said to me yesterday morning was, “Lin, do you remember the Moonies from the 70s and how people were brainwashed?”

Well, evidently Tim thought I was a victim of mind control and in need of de-programming because the night before I went out for a two-mile walk as soon as I got home, I didn’t have a beer or ice cream all night, and then went to bed early. “What happened to our Linda?” he demanded.

I can’t believe I walked by myself; I told you before the country scares the crap out of me and ever since I posted that link on Tuesday about serial killer Robert Garrow, I’m creeped out by the thought of a possible Garrow v.2. But I don’t want to lose the momentum from the daily walks Mike and I took in Las Vegas (Henderson, actually) and so I braved the country roads all alone since I couldn’t coax Susan to come with me. I almost turned back two minutes into my walk because there were a shit load of birds perched on a wire and more flying around, but I thought she’d make fun of me and I almost couldn’t blame her. Almost. I hate birds.

Anyway, I took this picture with my iPhone. You can kind of see the moon. It looked cool. 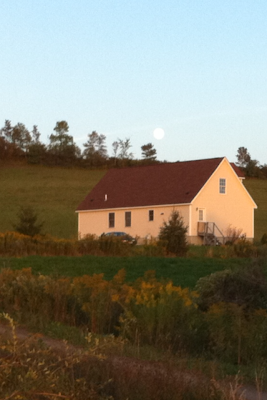 So yes, I was walking in the country by myself with birds and God knows what other kinds of animals hiding the bushes and potential ax murderers and it was even starting to get dark. I’m a brave, brave girl.

It's weird how something perfectly enjoyable to one person is a nightmare to another. Remember that hike in the woods last weekend? My friends thought it was the greatest thing, but I kept thinking, Every step I take is a step closer to getting out of these friggin' woods. My mother just went whitewater rafting--another thing you couldn't pay me to do. Same with sailing, sushi, and Disneyland--nightmare, nightmare, nightmare.

How about you? What is it that a other people find enjoyable, but hell no, not you?

I don't understand sky diving or Republicans, and I'd certainly never "do" either.

I don't like roller coasters and will never go bungee-jumping. I hate anything with a dead drop. I also can't stand Ann Coulter. She's kind of like a dead drop.

It's not the birds that scare me in the country...it's the dogs! you never know when they are going to come running down some dusty driveway. I hope you were carrying a big stick!

wait....one more that I MUST include! Plays. I hate plays. Not only is it a nightmare to watch them, it would be an even bigger nightmare to be in one!

Camping! I won't go camping! Why the hell do I work so hard to keep a roof over my head - so I can live like a homeless person? Wake up with a backache? No toilets? No showers? Can't properly wash your hands? Eat a decent meal that isn't beans or dried snack foods?
I can go for hikes, nature is nice. I can go without tv or internet for a while, too. But wearing all those clothes to freeze & fite bugs, ants, serial killers on the prowl, just don't sound like fun!

The best part of waking up (after a night on a firm mattress) is HOT SHOWER & FRESH BREWED COFFEE OR TEA! Ahhhhhhhh civilization! I can start my day after that.

Hey, I hate all those things, too! Ann Coulter... puke.

Modern Mom, I passed a dog on my walk that was held behind an electric fence. I was PRAYING the thing really worked!

I'm with you, Court, on plays--live theater seems overacted to me, though I certainly have an appreciation of live performances. Don't even get me going on musical theater; I think I'd rather go to Disneyland.

Anon, we're on the same page when it comes to camping. So much freakin' work and um... what's the reward? I was on a campground recently and thought, you are voluntarily doing this? Of course, my idea of roughing it is a Marriott without premium cable.

I'm afraid of babies!
They are so fragile & I am so clumsy!
I trip on my own two feet on a regular basis, but what if I dropped one? They can't even support their own tiny head, what if I get distracted & forget for a second and forget? What if I'm too tired because I stayed up all night watching them so they don't get SIDS? What is that anyway & how do I know it isn't going to happen to me? Am I going to be part of that statistic which dies in childbirth? Who will care for them when I'm gone if they come out mentally retarded? How can anyone afford them - they cost a goddamn fortune! There are way too many variables. I've seen so many nice couples raise such horrible demon children it boggles the mind! Or maybe the child turns out just fine, but starts dating slimeballs with tattoos and the next thing you know, you are stuck helping to raise another one. What if they sex text to another teenager & get arrested for distributing child porn? No, just way to many variables one can't control!

Yeah, sailing is a KICK! But nix the sushi and the oysters too. I also despise dating a great guy, only to find out he's still carrying the heavy baggage. Vino anyone?

I don't get:
Shakespeare
The "humor" of Chevy Chase
SEINFELD
Opera
STAR WARS
STAR TREK
Rap "music"
THERE'S SOMETHING ABOUT MARY
Ingmar Bergman movies
Cher
The appeal of baccarat
Or (and this one I REALLY don't get) Bob Dylan.

You don't get Seinfeld or Bob Dylan??? Mike Dennis, get some help!

i'm not a fan of, well, mornings. that about sums it up for me. wonder if was a vampire or, maybe, a lounge singer in another life.

I have been living in my house for over 20 years and I will not walk down our road by myself. Why? afraid I will get attacked by a dog.