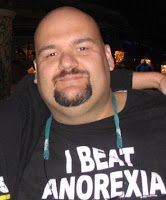 This is a post I hate to write; I've afraid I have some bad news about my friend and fellow blogger Hurricane Mikey. I'll get the story as straight as I can remember; forgive me if the details aren't exact.

At 1:00 this morning Mikey's sister Amy called to tell me they were preparing Mikey for emergency surgery. The family had just been brought in before they put him under. Mikey has several blood clots in his lungs and as I understand it, there's also been some damage to his heart.

Amy said they think the 29-hour drive from Vegas to Tennessee might have something to do with the formation of the clots; the condition is called pulmonary embolism. Every once in a while you hear of someone who develops this after being in one position for a long time. The situation is serious.

I'll let you know as I hear more. In the meantime, pray for the big guy.

We love you, Mikey!

Just spoke to Amy. Mikey made it through over three hours of surgery and is in recovery. The goal today is to wean him from the ventilator and have him start breathing on his own. Amy said there's still cause for concern and he's not completely out of the woods, but thank God he made it through the surgery.

She said he's heavily sedated, but is cognizant and responds to them. In fact, he was downright ornery when they made some of his visitors leave--that's a good sign!

Mikey's whole family is with him and his sister from Texas is flying in today. Thank God this happened in Tennessee where he has the support of his people.

More details as I hear them. In the meantime, "Go, Mikey, go!"

So sorry to hear about this, Linda. I will pray for this guy.

Thanks Linda for the update! Seems the bad news keeps piling up! Church toinght and will light a candle for Mikey!

Thank you so much for posting this....I will send his name in for healing and add him to my prayer list...

Thank you for sharing this Linda, will also send prayers for his healing recovery.

Thanks Linda for this update, our prayers here are for mikey and his family.
We love the guy overhere in the Netherlands.

Oh my gosh, how scary! I am so glad he pulled through and am hoping he has a SPEEDY recovery!

Our boy Mikey is in our prayers. We believe in you Mikey!!!