Busy, busy... and the joy of meeting blog readers in person

I'm late posting again this weekend.  It's becoming a habit, isn't it?

I'm starting to realize that being in a relationship--especially when you live together--takes a lot of time.  It's good... it's great, but I don't have as much "alone time," time I used to spend on my creative endeavors, which usually involved some kind of writing project.  I don't see my girlfriends as often; I'm behind on my email.  And no, I haven't written anything of substance in ages.

I am exercising, though.  That should count for something, but truthfully, I exercise only because I'm so friggin' vain.  Plus, my long-term goal--the most long-term goal I could possibly have--is to live to see my granddaughter, Hazel, on her 50th birthday.  I'll be 102, but I still want to look hot.

Anyway, yesterday Mike and I took the kids to the St. Patrick's Day parade in downtown Henderson.  I forgot my iPhone, so I don't have pics, but St. Patrick's Day in Las Vegas kind of sucks anyway.  First of all, having the parade after the holiday is just plain wrong, and if there's one time of year I severely miss Albany, it's in March.  In Albany, it's a 1-2 week event, depending on where the actual holiday falls.  In reverse chronological order, there's St. Patrick's Day itself; Parade Day, which is the Saturday before; and the Saturday before the parade is Corned Beef and Cabbage Day at my favorite Albany bar, The Washington Tavern.  St. Paddy's is a time to spend with family at the pub and run into old friends from high school and college.  There's no sense of tradition here in Las Vegas, not for me, anyway.

Plus, the weather this weekend has been terrible--we froze yesterday!  March is typically the best time to come to Vegas, but I feel sorry for anyone visiting now.  That said, last night I was very happy to meet one of my blog readers visiting here from The Middle of Nowhere, Wisconsin.  Seriously, Linda and her husband, Bob, live between one town with a population of 107 and another town with all of 200 or so inhabitants.  Can you imagine??? 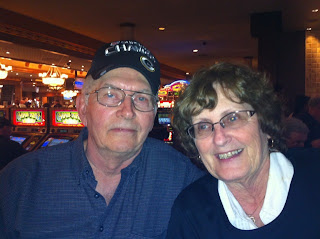 They were nice as hell and have been married almost 49 years.  I asked about their secret to a successful marriage and Bob deadpanned, "I worked from 2 a.m. to 2 p.m., so we hardly ever saw each other."  So cute.  Linda's been reading my crap here day after day for quite a while, God bless her.  Fortunately, she said I was exactly the way she expected, except a little taller. (I'm just under 5'5" in bare feet, but you can always count on another few inches in Vegas heels.)  Good thing she didn't say something like, "I thought you'd be a lot prettier" or "You're a lot thinner in your pictures," though that would have cracked me up.

I've met quite a few readers since I started this blog, and I really am so appreciative that anyone finds my life remotely interesting.  I mean, it's interesting to me, (and if you only knew the stuff I can't post!)  But everybody's life is interesting, if you just put the right spin on it.

(Side note to whoever you are in St. Francisville, Louisiana:  You've been a loyal reader for a long time.  Reveal yourself--I'm dying to know who you are!)

Anyway, tonight I'm hoping to do a couple of comedy sets at Palace Station and then at Boomer's.  A comic friend from Albany is in town, so it'll be great to meet up with him.  Comedy is definitely something I'll find the time to do, especially now that I seemed to have lost my stage fright after a mere 7 and a half years.  I can't be too busy to be funny.  Now that would suck.

My sincere thanks to all of you, dear readers.  And if you've read my book--double thanks!

Good Evening linda Lou - it's 20.37 here in the UK...
I have only been blogging for just over a month and sort of happened upon Linda & Her twaddle (coz of our mutual respect for the file Witches Of Eastwick)and have been reading her blog since.
I thought I'd read yours as she's one of your followers.
Must say, am intrigued by your book and may pop onto play.com and purchase a copy.
And I'm gonna follow too.
I love that you're determined to make it to a hot 102 yrs. Fantastic attitude ;)

Just recently downloaded and read your book on my Droid phone. Have lots to say but not much time. Let's just say for now that I Loved it! I had several ah ha moments reading your book. Your book caused me to do some thinking. I most enjoyed the moments in the book when you let us see what was in your head. Your private thoughts were the funniest parts of the story. We have a lot in common. Would love to catch your comedy act when I come to Vegas.
S

Welcome, invisiblewomanuk! I, too, am a big fan of Linda and Her Twaddle.

And thank you, Anonymous! I'd love to meet you next time you come to Las Vegas.

BH on my Kindle and my droid. Now you go everywhere with me. Including my shoe shopping extravaganza last week...5 prs of flipflops for my upcoming Vegas trip!

I have copied this incase you don't see my reply to your comment, (thank you by the way);
Vegas Linda Lou - I resemble Ricky G pre 'Hollywood meltdown'. Same belly & teeth.
I'm sure on a very good day I'd be able to have a beer & banter with him and not bore him senseless...I reckon he's gone a bit soft now though. A bit air brushed...
When you get a chance, you should YOU TUBE Andrew Lawrence, (newer stuff when he has very short hair) and Micky Flannagan, (Out Out)...And also watch Paul Whitehouse's old series, The Fast Show...the one Johnny Depp requested to appear in... comedy should be included in the Governments recommended '5 a day'.
I shall buy your book on pay day ;)

Linda - we enjoyed meeting you so much. But I must admit I grossly underrated my neighboring towns - upon checking the population, one has 423 and the other 541. So you see, I'm really not out in the "middle of nowhere". Check out my Facebook to see our arrival home. Las Vegas wasn't so bad in comparison.