It's going for 11 o'clock on Sunday night and I am freakin' exhausted!  I feel I've been going, going, going forever.  My grandson, Connor, left last Monday after a week-long visit, which was nothing short of delightful.  He got along so well with Mike's kids, and when the kids weren't around (they were in school last week; the February vacation must be an East coast thing), he had the big 52-year-old kid to play with.

Here they are at the Hoover Dam.  This is funny because doesn't it look like they're the same size?  I assure you, Mike is not Connor's height of 5'4".  Yikes--he has only another half-inch to go before he catches up with me! 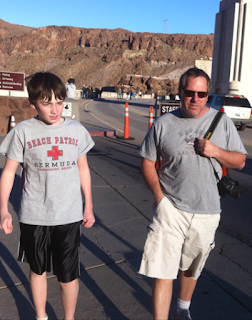 You've probably seen a million pictures of the new bridge.  Here's a million and one. 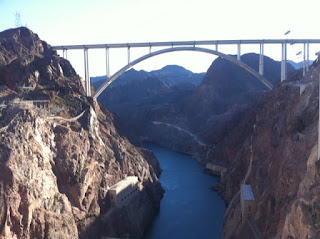 You can walk across the bridge from one side to the other, which the three of us did.  You can't see a damn thing when you're driving over it; in fact, you hardly know you're on the bridge at all.  I'm sure they didn't want people driving and taking pictures at the same time.

After Connor left I had a couple of days to prepare Linda Land for my brother and brother-in-law's annual NASCAR visit.  Linda Land got kind of neglected while Connor was here, and since both Steven and his wife, Kim, and Russ and my sister Lori always so graciously put me up when I'm in Albany, I wanted to make sure they had a comfortable place to stay.  Steven and Russ were the first people to stay there--I've never been there more than a few hours at a time myself--and I'm not kidding, I was putting the finishing touches on the place minutes before their arrival.

As you know, last year I celebrated PurgeFest 2010 and got rid of almost all my crap, so I'm just creating a funky space from what made it to my storage bin.  The couch isn't mine--it was in Mike's garage. 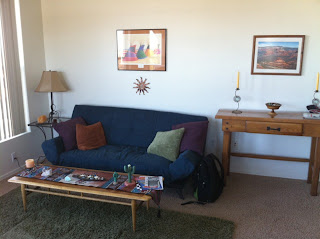 I still need to get a TV, or maybe I won't since I can sit on the couch and take in this view. 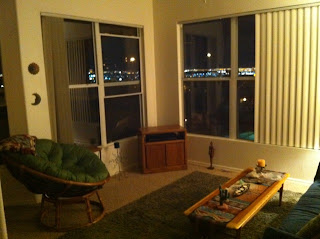 Can you believe I'm 53 years old and still have a papisan chair? Aren't you supposed to grow out of them like, when you graduate from college?  I don't care.  I love it. 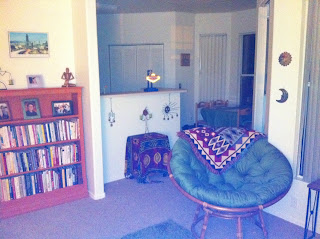 One thing--for all my faults, no one can accuse me of being materialistic.  I figure the contents of my entire 1 BR apartment is worth less than Mike's bedspread ensemble.  I've never cared about having stuff other than the essentials.  I care about having a good time!

Saturday morning I hung out with Steven and Russ in the hot tub and then lingered at the pool--with a People magazine and an US Weekly--after they went to the NASCAR events.  Glorious!  I think this place is going to work out perfectly as my little escape when things get crazy at Mike's. 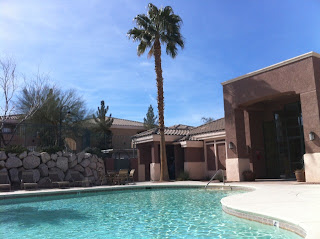 I have a lot more to tell you, but my man is waiting for me.   I guess I have the best of both worlds--I have my shabby-chic retreat, but at the end of the day, I'm sleeping in luxury.  I'm a lucky gal.

Linda, right now that pool looks so inviting. I had a hectic week too! and the thoughts of relaxing in the sun...
Enjoy your visitors!

Your place looks so comfy. You're right..who needs a tv when you have a beautiful view.

That looks a lot like Horizons at Seven Hills Condos...