It's official: my IQ is 1 million

You know I am so unbelievably full of myself, but I am seriously thinking I might be the smartest woman on the planet.  Again.

God bless me, getting my own apartment down the road from Mike was just the most brilliant move.  I've never slept or even showered there, but last weekend my friend Nina (the Mona character in my book) came in from L.A. and it was a great place for her to stay.  Just like when my brother and brother-in-law came to town last month for NASCAR.

I don't even go there every single day but when I do, I freakin' LOVE it!  Most of the time I head over for a bit of peace and quiet after work at 3:00, which is also when the afterschool hell breaks loose at Mike's.  Seriously, would I rather listen to the shooting, shooting, shooting sounds of Black Ops or... 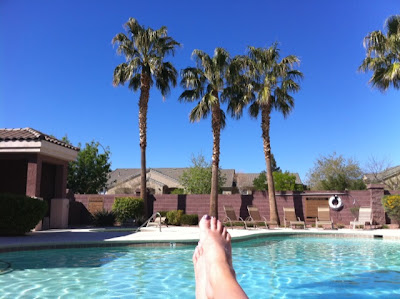 ... the sound of a gentle waterfall at the pool?

I usually head back to Mike's around 6:30 when the kids get picked up and then Mike and I do whatever it is we're going to do for the night.  You know, like go for a hot dog dinner at Costco.  Since we both work at home, we have quality time to ourselves until 11:30 the next morning when he picks up the kindergartener.

So yeah, the kids are here every day after school, all day on school holidays and vacations, and every other weekend, including that Sunday night.  That means Mike and I have four kid-free days a month.  Four.  Keep in mind my "children" are 32 and 33, and they're across the country.   And at this point in life, I like peace and quiet.  And on a good day, I'm still the most neurotic person on earth.

As brilliant as I declare that I am, I'm not the first to come up with the idea of having a separate abode.  There's even something that has the official name, "Living Apart Together," which evidently is increasing in popularity, particularly among baby boomers.  According to Wikipedia, LAT is a term "for couples who, while committed to each other, decide to have separate homes rather than one shared residence." Many of these couples are even married; Woody Allen and Mia Farrow lived in different homes on either side of Central Park while they were together.  Um, didn't she have a hundred kids or so?  (Insert Soon Yi joke.)  Actually, I should come up with a better example; they were kind of a mess, no?

Anyway, evidently a lot of couples do this, though most of what I read is of couples who seem to actually live separately; Mike and I spend most of our time together and Linda Land is really just a retreat.  I can't help it, I need to escape from the incessant Black Ops war, like the one that ensued last weekend when it was Mike's turn to have the kids.

Aaaaah, this was my life from the beautiful Linda Land balcony Sunday afternoon: 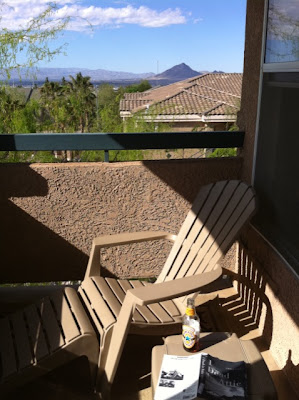 Cost of a 1BR/1bath apartment:  $701.25
Water, sewer. electric and gas:  less than $100.00
Enjoying a good book and drinking a Newcastle on your balcony overlooking the Las Vegas Valley on a Sunday afternoon basking in the sunshine in your bathing suit and not even caring that your gut's hanging out a little:  Do I really have to say it?

Who wants to join me?

I must say that is one brilliant move! I envy you. I come from having no kids, to have a 20 and 12 year old around and while I love them dearly, I'm not use to it and sometimes I retreat to the basement to hide in my craft space. I sure could use a place of my own for sure! Enjoy EVERY minute of it!

LAT works out great for Michael and me as well. Love him dearly, even want to marry him, but totally good with having separate residences at this point! We're together all weekend, he's over at least twice during the week, but we have 2 nights a week where he stays at his place and I'm at mine.

Why fix something if it ain't broke? LOL

i lived with my ex for 3.5 years and i just can't imagine living with someone ever again, unless it's in a huge house and i have my own wing. i love, love, love living alone in my cozy little apt.

Linda Land looks dreamy. if i were anywhere near you, a good book and i would be on our way over.

It is a brilliant move but if you were in L.A. that little one bedroom would probably run you $1,000. UGH. I hate l.a.

A bottle o' dog??!! I thought you'd have a Cosmo, or even a gin & lemon...oh well, different courses for different horses ;)

Yep, that's what happens when you become involved with a man with kids - his schedule primarily revolves around them first.

Kind of getting the subtle vibe here that you don't really like his kids. Kids are smart - they can pick up on this (even without reading your blog, heh heh.)

Nope--nothing could be further from the truth. I adore Mike's kids, and we do lots of family-type things together. The little one loves to hang out with me at Linda Land. She knows it's a special place where I go for peace and quiet.

You're right about how kids pick up on things. They know when your face lights up when they enter the room... and also when it doesn't. That's exactly why I never want to burn out. I want them to always feel that the sight of them brings me joy. Balance is key.

Ummm Can I come? :) I gave birth to both of my babes....but I could use some Linda Land once in a while. I'm sure it would make me a better Mother! lol